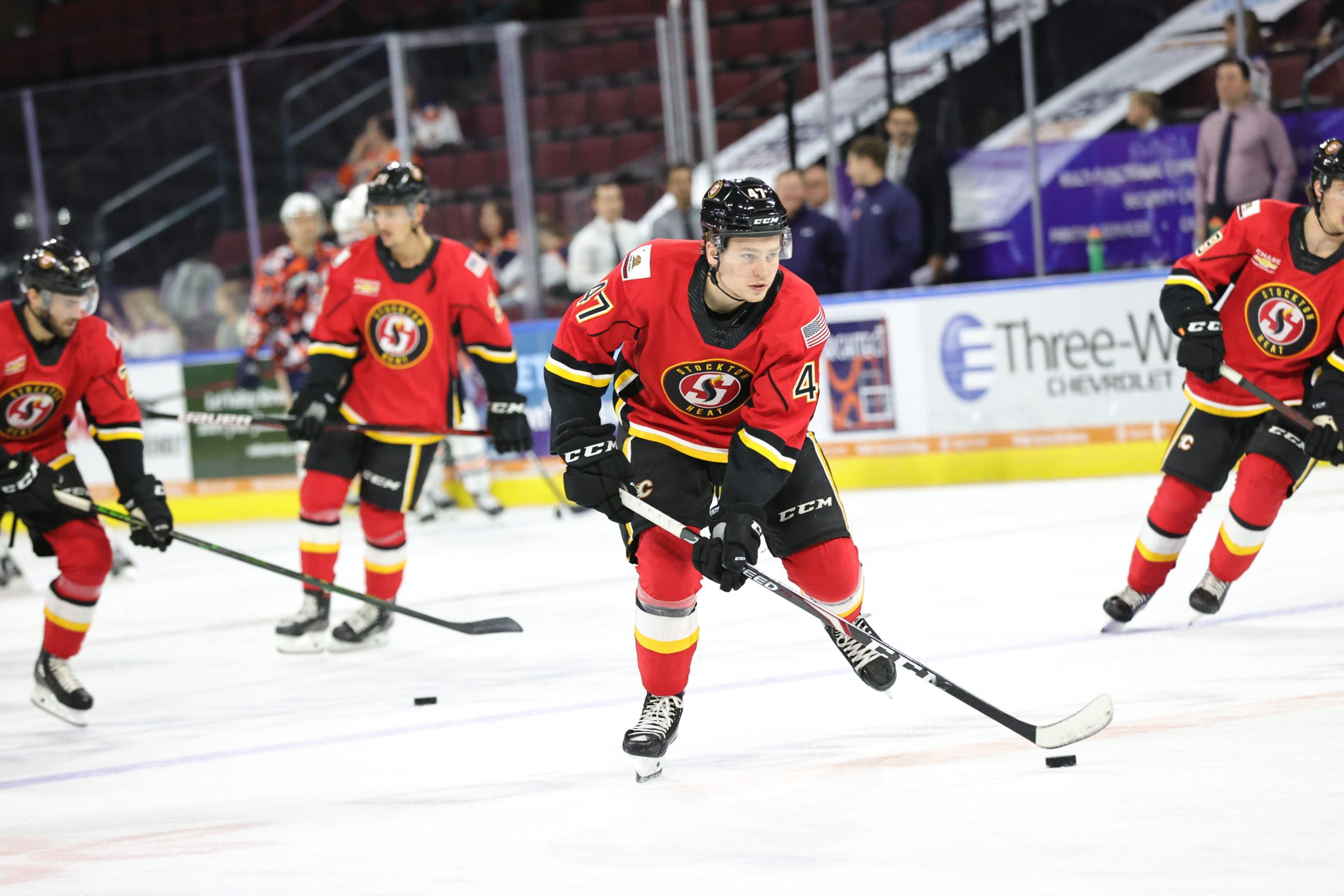 By Mike Gould
1 year ago
The beginning of the 2022 IIHF World Junior Championship is just three days away.
Starting on Boxing Day, hockey’s top prospects from around the world will compete for World Junior gold in Edmonton and Red Deer. Many of these prospects have already been drafted by National Hockey League teams.
The Carolina Hurricanes will send a league-leading 10 prospects to the 2022 World Juniors. The Detroit Red Wings, with eight confirmed attendees, rank second in the NHL.
Only two NHL teams, the Tampa Bay Lightning and New York Islanders, will be without a single representative at the 2022 tournament. Seeing as both the Lightning and Islanders have been perennial contenders for the last few seasons, this isn’t entirely unexpected.
Then, there are the Calgary Flames, who will send just one prospect — 2021 first-round pick Matt Coronato — to the World Juniors. They’re far from being alone in this regard, as the Arizona Coyotes, Colorado Avalanche, San Jose Sharks, Vancouver Canucks, and Washington Capitals can also lay claim to just one 2022 WJC selection in their ranks.
Washington has long been a contending team, one that has distinctly prioritized immediate help over draft picks. Meanwhile, the Sharks, Canucks, and Coyotes have been mismanaged over the years to the point where they sit outside the playoff picture with few prospects to show for their inadequacy.
The Flames are neither of those things. They haven’t reliably been a playoff team, but they’ve done a reasonably good job of drafting talented players in mid-range slots. Despite this, the Flames will send just one prospect to 2022 World Juniors after being represented by four at last year’s tournament.
Why is this the case? There are a few reasons — most of which have little to do with the on-ice performance of the Flames’ various prospects:

1. Connor Zary is (barely) too old

Hockey Canada’s 2022 World Junior team looks stacked, as usual.
2020 NHL first-round draft picks @Cole Perfetti, @Jake Neighbours, @Kaiden Guhle, @Mavrik Bourque, and @Ridly Greig headline a roster that looks destined for the podium.
The Calgary Flames selected forward @Connor Zary in the first round of the 2020 draft. The Saskatoon product was one of just a handful of 2020 draftees to crack Canada’s 2021 World Junior squad and he’d likely be a top-six forward on the 2022 team … if he were eligible to play.
Zary was born on Sept. 25, 2001, just 10 days after the cutoff for the 2020 NHL Draft. Only players born in 2002 or later are eligible to play in the 2022 World Juniors.
While fellow Flames prospect @Jakob Pelletier — born on Mar. 7, 2001 — was able to play World Junior hockey in his draft-plus-two season as a result of his late birthday, Zary sits on the opposite end of that spectrum. On the flip-side of that coin: Zary was eligible to make the jump to the American Hockey League one season earlier than Pelletier.
Zary suffered a fractured ankle during a September exhibition game and didn’t make his season debut with the Stockton Heat until Nov. 10, after which it took him a while to find his footing again at the AHL level. After scoring just one goal in his first eight games of the 2021–22 season, Zary has three goals and seven points in his last eight AHL contests.

Flames 2020 second-round pick @Yan Kuznetsov represented Russia at the 2021 World Juniors. As one of his home country’s most experienced eligible defence prospects for the 2022 tournament, Kuznetsov seemed like a lock to return.
Suffice to say, it came as a bit of a shock when Russia announced its final roster without not just Kuznetsov, but every eligible Russian prospect playing for clubs in North America.
Three of those defencemen (Savikov, Smirnov, and Steklov) are undrafted 19-year-olds. Novikov was a very late selection (188th overall) in the 2021 draft.
Russia isn’t exactly overflowing with high-end defence prospects. It made very little sense for them to omit the likes of Kuznetsov, @Daniil Chayka, and @Artem Grushnikov, three of the four Russian defenders picked in the first two rounds of the last two drafts.
Kuznetsov currently plays for the Saint John Sea Dogs. Chayka and Grushnikov are both in the Ontario Hockey League. The Athletic‘s Scott Wheeler suggested “hubris and politics” were at play during the assembly of Russia’s team. If these players were developing in Russia instead of in North America, would they be on the World Junior team?
Head coach Sergei Zubov had a slightly different explanation, although Wheeler didn’t exactly buy it:
Kuznetsov has a goal and two assists in three games since joining the Sea Dogs. He started 2021–22 with the Stockton Heat, recording zero points in 12 games as a depth option on a stacked defence, before being assigned to the QMJHL earlier this month.

3. Most of Calgary’s eligible prospects are stuck behind deep national teams

Kuznetsov aside, the Flames certainly seem to prefer drafting prospects from North America.
Calgary selected eight players in the 2021 draft. Six are from either Canada or the United States. The same can be said for five of their eight draftees from the previous year.
The Flames’ five non-North American draftees from 2020 and 2021 are Kuznetsov, @Daniil Chechelev, @Ilya Solovyov, @William Stromgren, and @Arsenii Sergeev. Only Kuznetsov, Stromgren, and Sergeev were eligible for the 2022 World Juniors, although none of them were picked.
We’ve already talked at length about Kuznetsov. Sergeev, a goaltender who is currently developing in North America, might have been in a similar boat as Kuznetsov and Chayka in the eyes of Team Russia’s management.
Stromgren, a 2003-born winger, probably could have made Sweden’s 2022 World Junior team but hasn’t done enough this season to earn a spot. He’s seen his production in Sweden’s U-20 league decrease from 10 goals and 18 points in 14 games last season to nine goals and 23 points in 29 contests this year.
Whereas many of Calgary’s eligible prospects aren’t World Junior-bound this year due to a myriad of factors beyond their control, Stromgren’s omission from the 2022 tournament has everything to do with his worrying regression as a draft-plus-one player.
Nevertheless, Sweden’s World Junior team is always a tough one to crack. Conversely, the Flames have zero eligible Czech, Finnish, Slovak, German, Austrian, or Swiss prospects. Those countries often have fewer NHL-affiliated prospects and frequently end up taking multiple players drafted in the later rounds.
Canada and the United States mostly stock up on first- and second-round prospects. The likes of Rory Kerins and Jeremie Poirier would likely have no trouble making Team Finland or Team Czechia; as Canadians, they barely received consideration as bubble players.
Why, then, did Canada opt to take Carolina 2020 seventh-rounder @Ronan Seeley over Poirier, himself a third-round pick (and a major faller) from the same draft? In short: Hockey Canada seems to have prioritized defensive acumen over offensive skill when selecting rearguards for its 2022 World Junior team.
If 2021 eighth overall pick Brandt Clarke has enough “defensive inconsistencies” to worry Hockey Canada brass, you can bet Poirier’s offence-first game caused the same alarm bells to ring for that management group. Seeley was a much safer pick for Team Canada in this setting; Poirier remains the prospect with higher upside.
Kerins, Calgary’s sixth-round pick from 2020, is having a ridiculous OHL season with the Soo Greyhounds. He’s also somebody who was negatively impacted by the 2020–21 OHL shutdown.
You’ll notice that Team Canada’s 2022 roster boasts just three OHL forwards. One of them is Shane Wright, the projected 2022 first overall pick; another is @Mason McTavish, a top-three pick from 2021.
Then, there’s @Will Cuylle, who went 114 picks ahead of Kerins in 2020 and spent almost the entire 2020–21 season in the AHL. Likely owing to his much less substantial draft pedigree, Kerins played just four AHL games with Stockton last season.
Kerins has 14 goals and 44 points in 26 games with the Greyhounds this season. Cuylle, who is two months older, has 18 goals and 25 points in 22 games. Only one of these two players had the benefit of being watched extensively during the 2020–21 season. The other, more productive player didn’t make the World Junior team.
Calgary has many talented young players in its prospect pool. Rory Kerins, Jeremie Poirier, Yan Kuznetsov, and William Stromgren are likely all national team-calibre prospects who, for a variety of reasons, will not be attending the 2022 World Juniors — and that’s not a big deal.