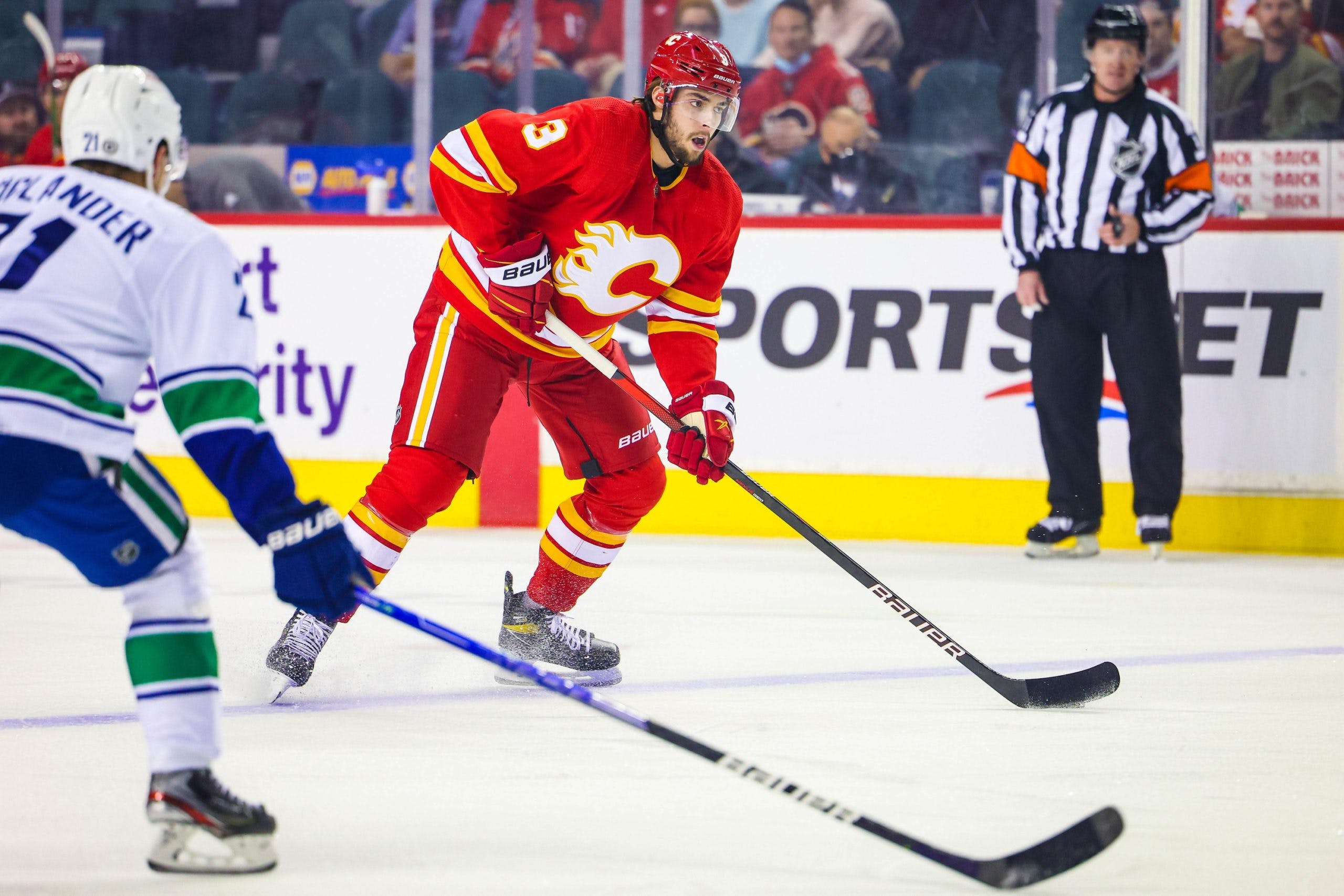 By Mike Gould
4 months ago
Connor Mackey is hardly still a “prospect,” in a traditional sense.
Sure, he’s played in just nine National Hockey League games since signing with the Calgary Flames in 2020. He’s been an outstanding two-way defenceman in the AHL with the Stockton Heat.
But Mackey just turned 26 on Monday. He’s older than Noah Hanifin, Rasmus Andersson, and Oliver Kylington. He’s no longer eligible for the Calder Trophy, and wasn’t featured in our 2022 prospect rankings as a result. Mackey will be on the wrong side of 30 before Jonathan Huberdeau reaches the halfway mark of his contract extension.
The Flames have a ton of defencemen signed for the upcoming season, and Mackey likely slots in at No. 7 or 8 on the current depth chart. Let’s take a look:
Mackey is currently under contract at a manageable $912,500 cap hit through the end of the 2022–23 season. He was consistently more impactful than Valimaki at the AHL level in 2021–22 and should stand a solid chance of making the Flames out of camp this year.
But is Mackey really destined to be a long-term Flame? He’ll be eligible to become a restricted free agent with arbitration rights next summer, but he certainly hasn’t done enough at this point to displace Weegar, Hanifin, or Kylington on the left side.
The Flames currently boast an extremely deep defensive group. For prospects coming out of junior like Jeremie Poirier and Yan Kuznetsov, their NHL hopes rest in the likes of Tanev and Zadorov having aged out by the time they’re ready to make their mark.
Mackey is only one year younger than Zadorov, who has already skated in 485 NHL games (not including playoffs). It simply isn’t feasible for Mackey to sit idly by and wait his turn with the Flames — he has to make an impact now.
The 2022–23 season will be absolutely critical for Mackey. The Flames have enjoyed incredible injury luck over the last two seasons, but that’s bound to run out at some point. Mackey is almost certain to be the first fill-in when the time comes.
Since signing with the Flames organization in 2020, Mackey has consistently been the Stockton Heat’s No. 1 defenceman. He kills penalties, quarterbacks the power play, and logs huge minutes at even strength. Mackey was rightly named an AHL Canadian Division All-Star in 2021.
Mackey amassed eight goals and 52 points in 80 games with the Heat over his first two professional seasons. He added four points in seven playoff contests as the Heat reached the 2022 Western Conference Final, scoring the deciding goal in Stockton’s last win of the post-season.
While Valimaki spent much of the 2021–22 season on Stockton’s bottom pair, Mackey locked down the No. 1 spot all year long and earned three more NHL games. He remained with the Flames throughout their playoff run and, after that, immediately made his presence felt in Stockton after returning to help the Heat topple the Colorado Eagles in the third round.
Mackey has proven himself worthy of earning a legitimate shot in the NHL, but he doesn’t have the same luxury of time to develop with the organization that Kylington and Valimaki have enjoyed. He’s only been here since 2020, but he’s already just two years away from becoming an unrestricted free agent.
Ultimately, the only thing separating Mackey from a journeyman AHL defender like Dennis Gilbert is the allure of the unknown. Gilbert and Mackey are the same age and have been similarly productive in the AHL over the last two seasons, but Gilbert has a much larger sample in both the NHL and AHL. He’s a known quantity.
Mackey wrapped up his NCAA career two years after Gilbert. He’s only been a professional hockey player since 2020. We don’t really know exactly what he is, yet — but that can change pretty quickly.
We saw Kylington steal a spot with the Flames early on last year when Nikita Zadorov struggled out of the gate and spent considerable time as a healthy scratch. Kylington played lights-out throughout the pre-season and never relinquished his place in the lineup.
Mackey is two years older than Kylington was at the start of 2021–22. There’s even more urgency for the Tower Lakes, Illinois product to break through with the Flames this season. If he wants to be an NHLer in Calgary, he needs to make the most of that opportunity when it presents itself.
Otherwise, it might never come.