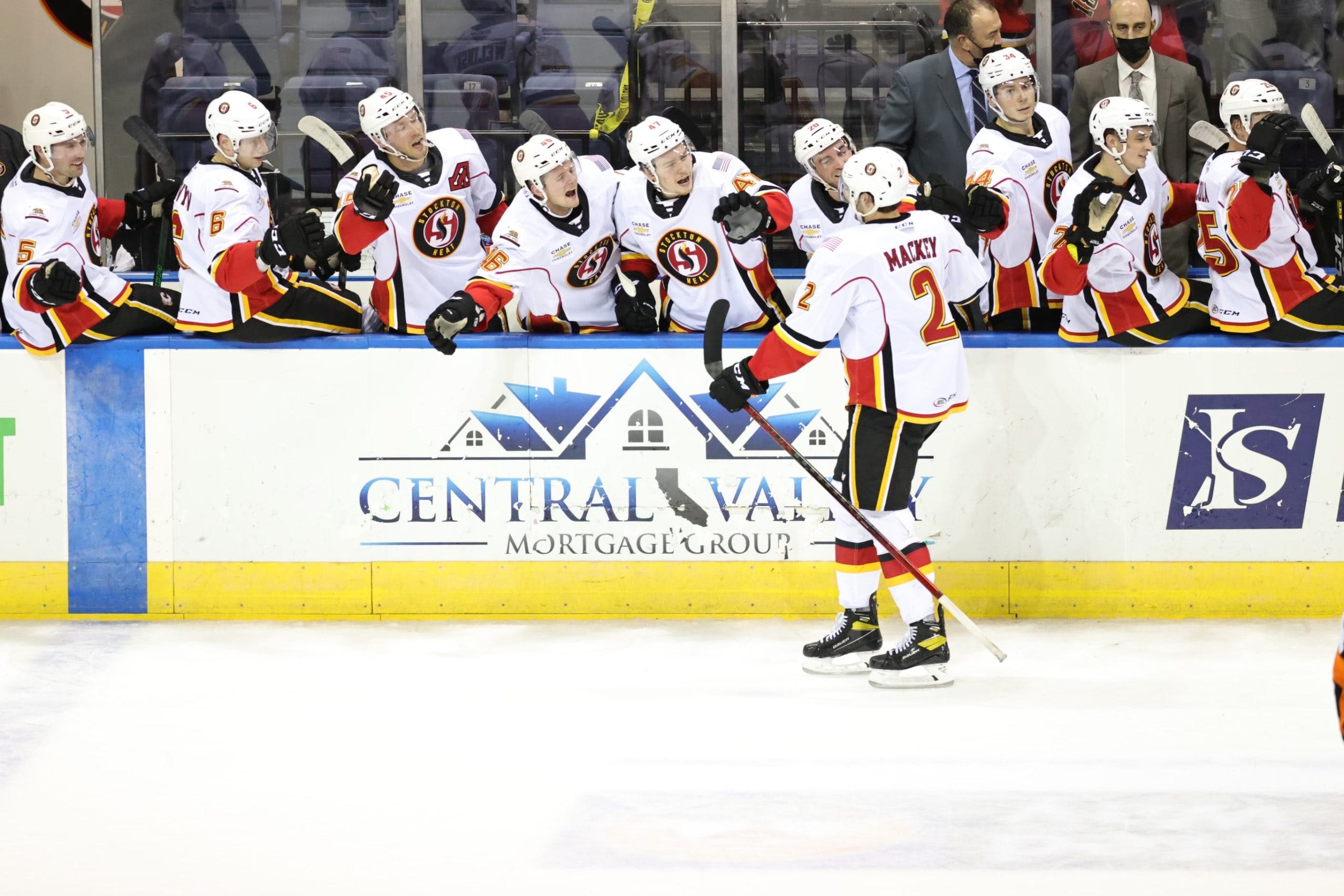 By Mike Gould
1 year ago
Two games. Two wins. Two “first star” nods.
Connor Mackey had a weekend to remember for the Stockton Heat, scoring three goals and five points as his team recorded back-to-back wins at home over the San Diego Gulls.
Mackey recorded two shorthanded goals and a power-play marker in the two contests. He peppered San Diego goaltender @Lukas Dostal with a volley of four shots in Stockton’s 4–1 win on Dec. 4 before capitalizing on his only chance the following night.
In Saturday’s 3–2 Heat victory, Mackey recorded a Gordie Howe hat-trick … all in the first period. A few minutes after assisting on @Glenn Gawdin’s opening goal, Mackey got into a scrap with Ducks forward @Benoit-Olivier Groulx (who objected to a heavy open-ice hit Mackey threw moments earlier).
Finally, with the Heat down a man with less than four minutes remaining in the opening frame, Mackey drove to the Gulls’ net on a 2-on-2 rush … and managed to deflect a long shot by @Jakob Pelletier past @Olle Eriksson Ek to give the Heat a 2–0 lead. Usually, that type of shot happens with the personnel reversed.
Mackey entered the series against San Diego with zero goals and four points in his first 15 games of the season. The 25-year-old defenceman is now up to nine points and has tied his goal-scoring output from 2020–21 in 10 fewer games.
Perhaps @Juuso Valimaki’s arrival in Stockton served as a catalyst for Mackey to start producing. The Calgary Flames demoted the 2017 first-round draft pick to the American Hockey League on Thursday, a move aimed at getting the young rearguard some much-needed playing time.
Valimaki fared reasonably well in his first two AHL games of the season, tallying three assists. But Mackey undeniably outshone his younger counterpart over the weekend, combining greater offensive output with a significantly more polished defensive game. At this point, Mackey likely has a leg up on Valimaki in that particular internal competition.
Mackey’s offensive outburst was a long time coming. Despite failing to score in his first 15 contests of 2021–22, the Tower Lakes, IL product managed 38 shots — only nine fewer than his output in 27 games last season.
The Calgary Flames currently have seven defencemen on their National Hockey League roster. @Michael Stone is the lone extra on a defensive corps with a locked-in top-six of @Chris Tanev, @Oliver Kylington, @Noah Hanifin, @Rasmus Andersson, @Nikita Zadorov, and @Erik Gudbranson.
If one of those six players ever becomes sidelined with an injury or some other ailment, the Flames will look to Stockton to bring up somebody either to draw into the lineup or sit as a scratch while Stone gets some reps.
At this point, Mackey is probably that guy.
Uncategorized
Recent articles from Mike Gould