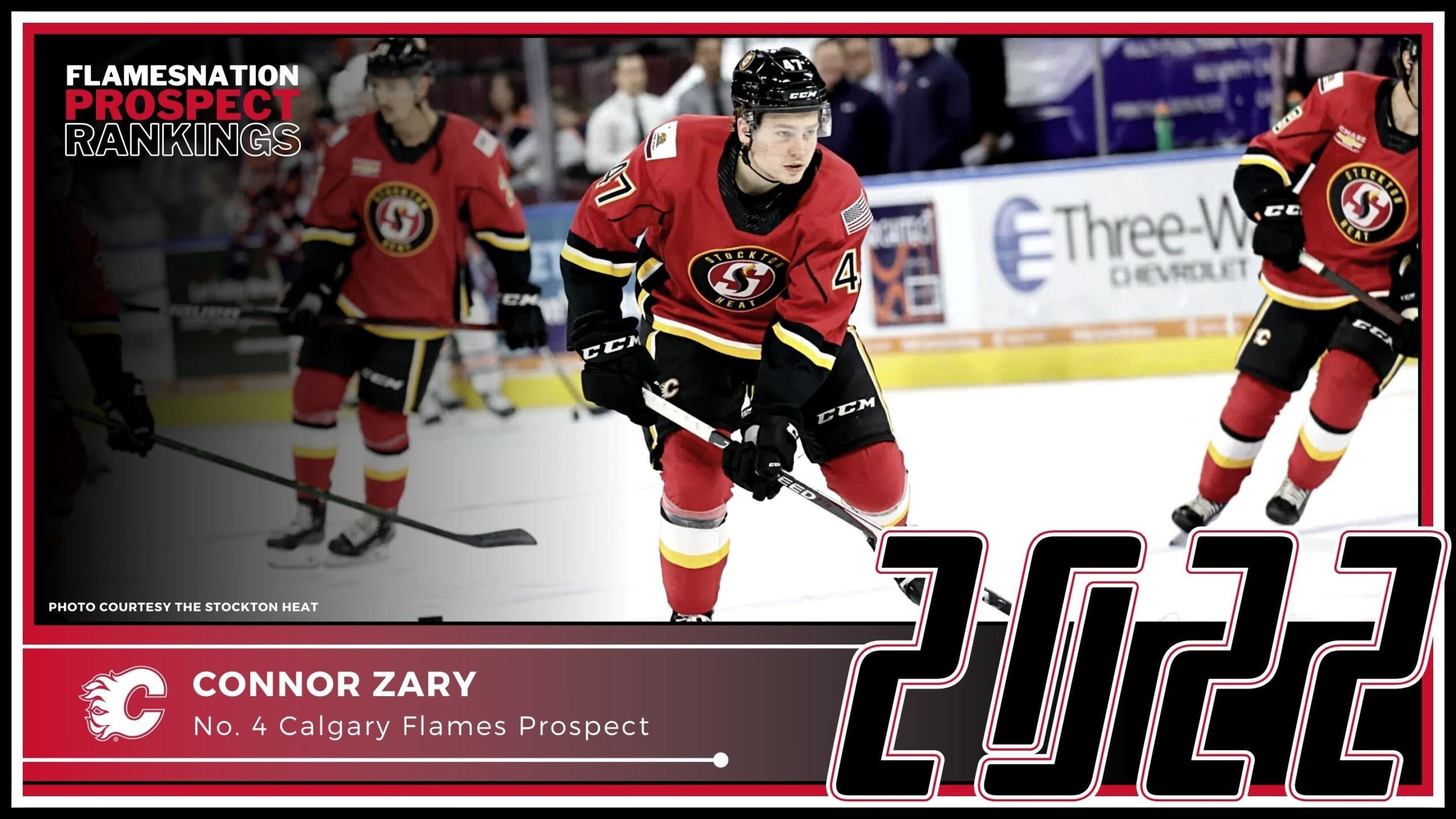 By Mike Gould
3 months ago
From my own personal standpoint, I prefer to begin my prospect rankings by working out a set of tiers and then arranging the various players within them.
Well, folks, we have arrived at the top tier.
Injuries hampered Connor Zary’s first professional season in the Calgary Flames organization, but he remains an exciting prospect with a lot to offer. Here’s a closer look at what you can expect to see from Zary in the years to come.
Connor Zary
Left-handed centre
Born Sept. 25, 2001 (age 20) in Saskatoon, Saskatchewan
6’0”, 180 pounds
Selected in the first round (No. 24 overall) by CGY in 2020
The Flames traded down twice from pick No. 18 to select Zary from the WHL’s Kamloops Blazers in 2020, adding the picks used to draft Jeremie Poirier and Jake Boltmann along the way.
Most outlets listed Zary as a top-20 prospect entering the draft, with some analysts ranking him as high as No. 10, and the Flames getting him at No. 24 was a nice piece of business by general manager Brad Treliving.
Zary lived up to his draft hype in his first season as a Flames prospect, looking very much like a first-round pick in a nine-game stint with the Stockton Heat at the beginning of the 2020–21 season before returning to Kamloops and scoring 24 points in 15 games.
Unfortunately, not much went Zary’s way in 2021–22. The young centre had to wait until the middle of November to make his season debut after suffering a fractured ankle during training camp, and he battled a few other minor injuries throughout the year.
It took a while for Zary to carve out a niche with the Heat in his first professional season, but he finally started to click in a middle-six role in March and April. He finished the regular season with 16 points in his last 27 games, including eight goals in his final 15 contests.
Zary finished the 2021–22 regular season with a total of 13 goals and 25 points in 53 games. That’d put him on pace for 18 goals and 34 points in a 72-game season; for comparison’s sake, newly-acquired prospect Cole Schwindt (who ranked No. 10 on our list and is exactly five months older than Zary) scored 19 goals and 40 points in 72 AHL games last year.
Why, you might ask, is Zary ranked ahead of Schwindt? Well, for one, Zary managed similar AHL production despite often playing well below his full capability. We’ve seen what Zary can do at the AHL level when completely healthy, and his junior production surpassed Schwindt’s by a wide margin.
Neither Zary nor Schwindt are likely to become NHL regulars this year (although we could see both receive call-ups throughout the season). But they’re two centre prospects who will likely compete with each other for shifts with the Calgary Wranglers. If anything, the battle between Zary and Schwindt might be the internal competition to follow in the AHL this year.
Here’s how Wranglers head coach Mitch Love described Zary’s 2021–22 season in conversation with our own Ryan Pike:

Probably the biggest word that comes to mind is “adversity.” You mentioned some of the injuries. It seemed like when he was getting into a bit of a rhythm he had some sort of new ailment hamper his growth in his first year, but I think in a lot of my conversations with Connor throughout the season was these are teachable moments as a young pro, is the adversity you do have to deal with with injuries that probably happen throughout your career. You hope it doesn’t happen, but it does, it’s the business we’re in. But I felt like when he was playing and he was in a rhythm you could really see a lot of steps in his progression as a pro. In terms of adapting to the pro game, what you can or can’t do, what you can get away with as a pro where in junior, you’re a little more freelancing. The mistakes you make in junior you can make up for, while at the pro level you can’t. I saw a lot of growth in his game and another guy I’m excited to see in year two.

Zary should see a lot of time on the Wranglers’ top line this season, an opportunity he wasn’t really afforded in 2021–22.
With Glenn Gawdin, Luke Philp, and Byron Froese now out of the picture, the Flames’ AHL centre depth has become a lot younger and more prospect-laden than in years past. Zary, Schwindt, Ben Jones, and Ilya Nikolaev are all on our top prospects list, as is Martin Pospisil (who has spent significant time both on the wing and at centre during his AHL career).
This coming year will be a huge test for Zary. He’ll likely be given big minutes against top-end AHL opponents to start the year, and it’ll be up to him to produce — lest he be replaced by one of the other centres on the depth chart.
There’s still tons of time for Zary to develop in the Flames’ system. He’s still very much one of the team’s top prospects. But he needs to take a couple steps forward in 2022–23.