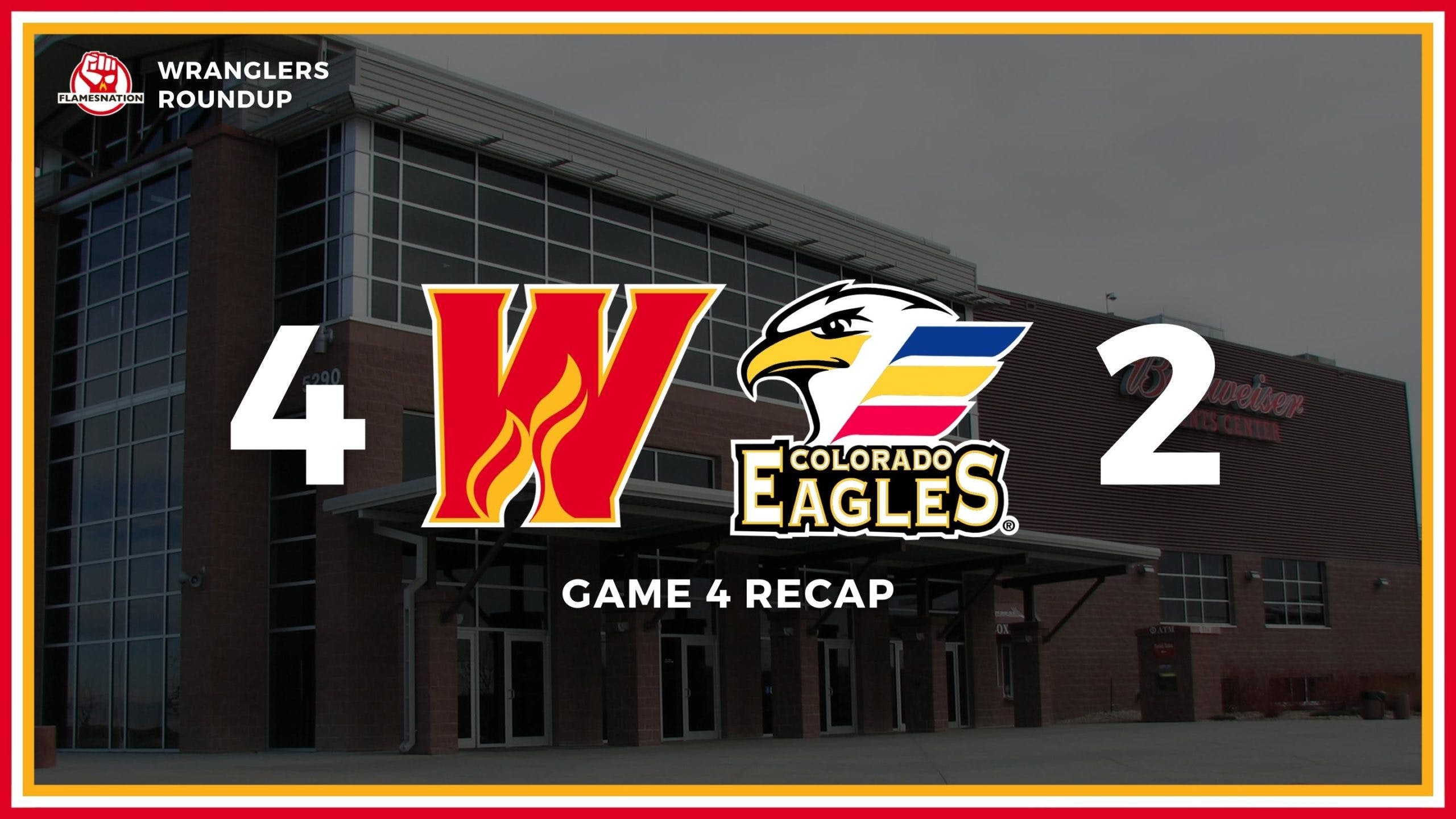 By Mike Gould
3 months ago
The Calgary Wranglers finally — finally! — picked up their first American Hockey League win on Saturday evening.
Dustin Wolf made 33 saves and Connor Zary scored twice as the Wranglers took a 4–2 victory on the road to conclude a back-to-back set against the Colorado Eagles.
Matthew Phillips and Walker Duehr also tallied for Calgary, with Phillips’ team-leading third goal of the season ultimately standing as the first game-winner in Wranglers history. Calgary outshot Colorado 38 to 35 in the game.
For tonight, we’ll spare you a transcription of the scoring summary — that’s available here — and instead focus on some of the positive and negative trends that continued in Saturday’s game.

Connor Zary: Up, up, up! — With Glenn Gawdin and Luke Philp no longer in his way on the depth chart (and no pesky broken bones taking away his training camp), Zary has taken hold of the Wranglers’ No. 1 centre spot and has fully looked the part. He didn’t start between Matthew Phillips and Jakob Pelletier on Saturday — Martin Pospisil lined up between those two, instead — but make no mistake: Zary is this team’s top pivot, and he was rewarded for his strong play with a pair of goals in the win over Colorado.
Jakob Pelletier: Work in progress — Pelletier is still stuck at zeroes in goals, assists, and (of course) points through the Wranglers’ first four games. He initially received credit for a phantom helper on Phillips’ go-ahead goal in the third, but the AHL ultimately (and rightfully) took away the assist. Unfortunately, Pelletier just hasn’t been able to do much in transition so far and has decidedly been the third-best player on his line. He just looks a step behind, not altogether dissimilar to how Zary looked out of the gate last year. That all being said, Mitch Love will almost certainly keep giving Pelletier ample opportunities to finally break through.
Dustin Wolf: Steady — Looking at Wolf’s limited body of work this season, it’s easy to say he has yet to meet expectations. And sure, he’s the reigning AHL Goaltender of the Year — that’s a pretty high standard. But you could make a decent case that Andreas Englund’s goal in the first period of Saturday’s game was the first Wolf would really like back in his three starts this season. He completely missed it. Happens. But Wolf didn’t have a chance on Keaton Middleton’s tally in the second period and he locked it down from there, ultimately posting a stellar .943 save percentage in the contest. Sure, he got a little help from his posts along the way, but that’s hockey. Wolf will be just fine.
Brett Sutter: Through the roof — It’s difficult to overstate how effective Sutter has been through the first four games of the season. Even at 35, he does everything well at the AHL level. We might’ve underrated his offensive capabilities — he was once a top producer in Charlotte, Iowa, and Ontario, after all — and he hasn’t remotely looked out of place on the power play. But he’s also been a fixture on the PK while seeing a ton of ice at five-on-five. Sutter doesn’t have Justin Kirkland’s shot, but he might functionally end up being his replacement in Love’s system.

Remember those two agonizing home losses to Coachella Valley? Hah, well … Calgary is set to head to Coachella Valley for a back-to-back set against the Firebirds on Oct. 28 and 29. You’ll be able to watch both those games on AHL TV.
After that, the Wranglers will return to the Scotiabank Saddledome to host the Tucson Roadrunners (Nov. 2 and 4) and San Jose Barracuda (Nov. 6 and 8) in quick succession. Tickets for those games are still available at CalgaryWranglers.com.
News
Recent articles from Mike Gould