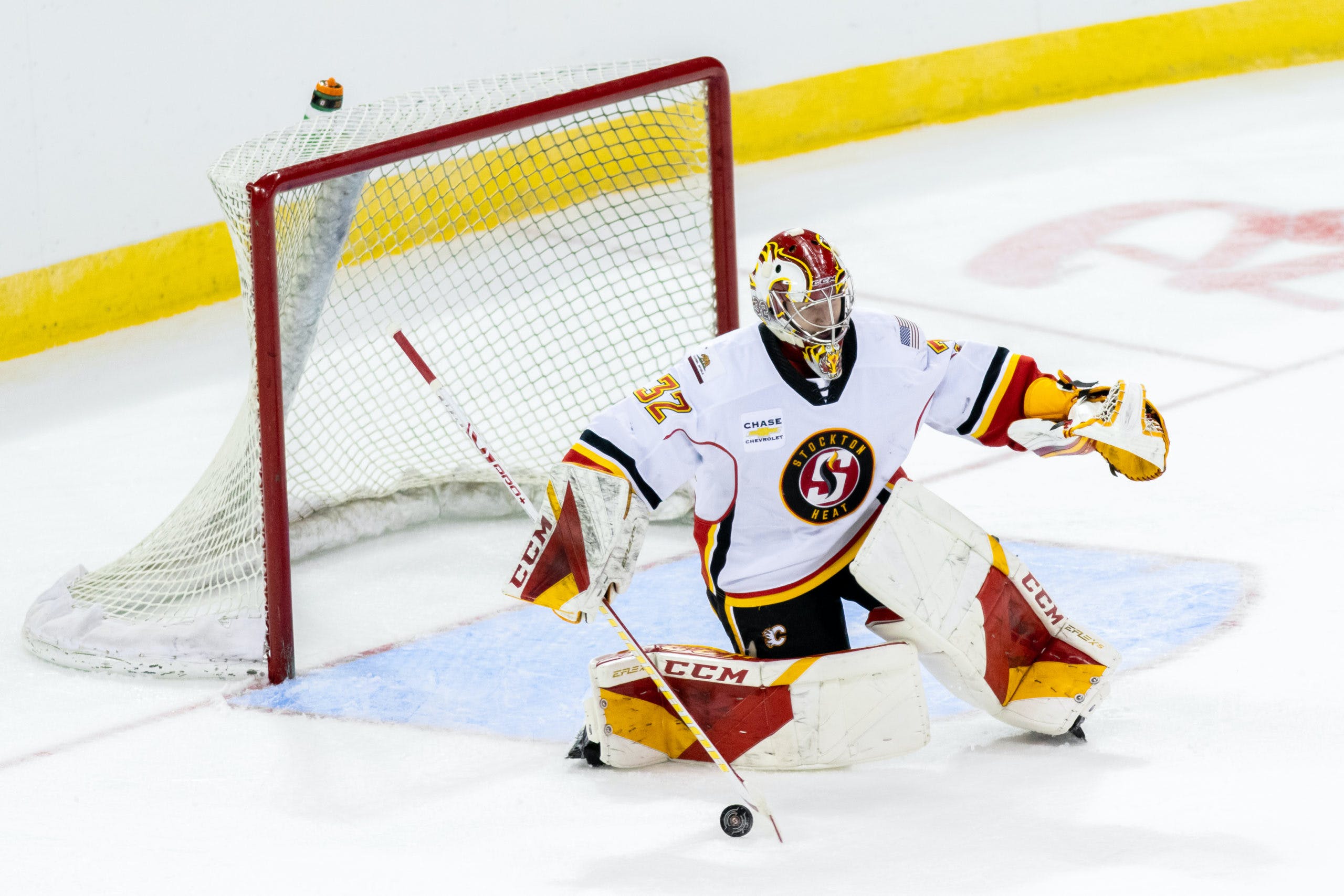 By Mike Gould
6 months ago
Back in the 1930s, Boston Bruins fans developed a habit of calling goaltender Frank Brimsek “Mr. Zero.”
Brimsek posted 10 shutouts in just 43 games as a rookie in 1938–39 as the Bruins won the Stanley Cup. The 5’9″ netminder was awarded the Calder Trophy after his excellent debut campaign.
Although he’s only a couple inches taller than Brimsek was in his day, @Dustin Wolf didn’t manage a single shutout in his first full American Hockey League regular season with the Stockton Heat.
Well, times have changed. Wolf has since emerged as a strong contender to inherit the “Mr. Zero” mantle after posting three shutouts in Stockton’s 3–1 series victory over the Colorado Eagles in the AHL Pacific Division Final.
Wolf made 40 saves — his most in a single game during the 2022 Calder Cup Playoffs — as the Heat prevailed over the Eagles by a 1–0 score in the deciding fourth game of the series.
@Justin Kirkland scored the only goal of Game 4 at the 3:29 mark of the third period, with @Luke Philp and @Martin Pospisil assisting. The Eagles outshot the Heat 40–35 in the game, which took place at the Budweiser Events Center in Loveland, CO.
The Heat beat the Eagles three times in the Pacific Division Final. All three of their wins were shutouts. Wolf became only the third goaltender in AHL history to post three shutouts in a single playoff series, joining Mika Noronen and Gord Henry.
Wolf received the Aldege ‘Baz’ Bastien Memorial Award as the AHL’s top goaltender in 2021–22. He went 33–9–4 with a .924 save percentage and no shutouts as the Heat put together the league’s second-best record (45–16–7) in the regular season.
The 21-year-old goaltender was excellent as the Heat swept the Bakersfield Condors in the Pacific Division Semifinal, posting a perfect 3–0 record and a .926 save percentage in the best-of-five series.
Next came the Eagles. Wolf made 23 saves in Game 1 (5–0 win) for his first professional shutout before posting a 27-save clean sheet in Game 2 (1–0 win) as the Heat took a 2–0 series lead into Loveland, CO.
Game 3 was a bit of a slugfest, with the Heat and Eagles combining for 11 goals on 82 shots in just over 70 minutes of play. Eagles forward @Jean-Luc Foudy gave his team a 6–5 victory with a breakaway goal at the 10:07 mark of overtime; Wolf stopped 32 of 38 shots in the loss.
Wolf finished the series against Colorado with a 3–1 record and a .953 save percentage in four games. He’ll be back between the pipes when the Heat take on the Chicago Wolves in the Western Conference Final; Game 1 will take place on June 3 at Allstate Arena in Rosemont, IL.