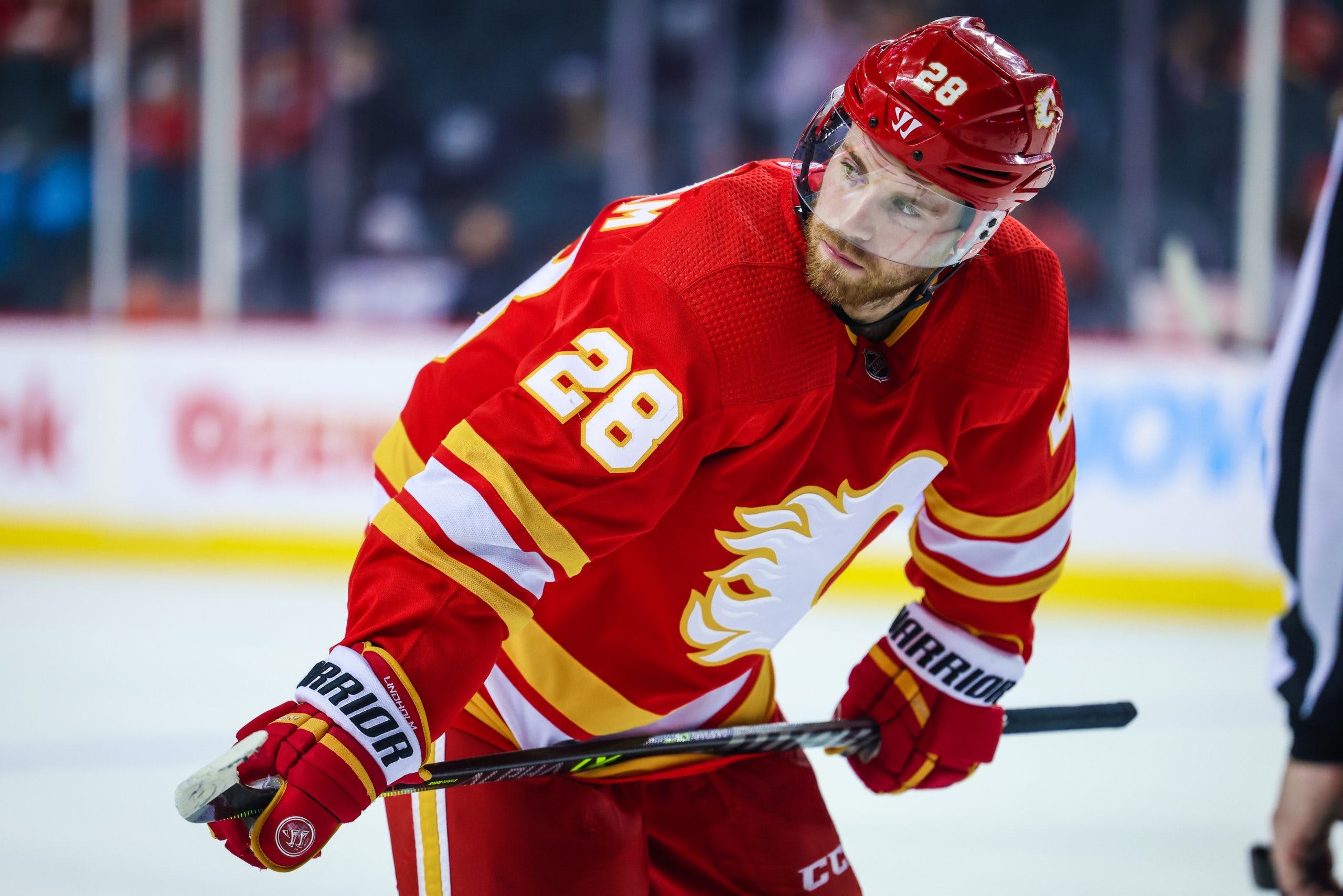 By Mike Gould
5 months ago
For many years, the Calgary Flames’ top line followed a familiar pattern.
Gaudreau–Monahan–Ferland. Gaudreau–Monahan–Jones. Gaudreau–Monahan–Stewart. Gaudreau–Monahan–Lindholm. Gaudreau–Monahan–Ritchie. Gaudreau–Monahan–Versteeg.
You get the picture. Johnny Gaudreau and Sean Monahan were the constants; Ferland, Versteeg et al. were the variables.
Well, Johnny Gaudreau has departed to be closer to home (but not too close). Sean Monahan is coming off an injury-plagued eight-goal season. And pretty much all of those ailier droits are long gone, with one exception.
Elias Lindholm has supplanted Monahan as the Flames’ No. 1 centre over the past three seasons, most recently finishing second in the Frank J. Selke Trophy race after scoring a career-high 42 goals in 82 games.
Lindholm finished one spot ahead of Florida Panthers pivot Aleksander Barkov in Selke balloting last year. Coincidentally, Gaudreau also ended up right in front of Panther-turned-Flame Jonathan Huberdeau in voting for the Hart Memorial Trophy.
While the Flames have historically elected to play their top offensive players together on the top line, the Panthers opted to separate Barkov and Huberdeau in 2021–22.
Huberdeau spent just 204 of his 1,010 five-on-five minutes playing with Barkov last season, according to Natural Stat Trick. Instead, the two superstars spent significant time driving their own lines, with Huberdeau primarily playing on a unit centred by Sam Bennett.
The Flames are in a position where they could feasibly run a similar scheme with their forwards. Andrew Mangiapane is practically begging for a role on the top line and would be a natural fit alongside a Selke candidate in Lindholm.
At the same time, Huberdeau has shown he can work wonders with a wide variety of linemates. This is a player who helped Sam Bennett — yes, that guy — become a 28-goal scorer with the Panthers. Anthony Duclair, another common Huberdeau linemate, scored a career-high 58 points last season.
Lindholm is the Flames’ top centre. He’s earned the opportunity to drive his own line. Players like Mangiapane and Blake Coleman could help Lindholm establish the Flames’ top unit as a dominant two-way monster. (Of course, Mangiapane would also spend a ton of time with Huberdeau on the power play).
That would leave Huberdeau to occupy the same role in which he thrived with the Panthers. He’s proven himself capable of creating all kinds of offence while also rejuvenating the careers of reclamation projects and young players waiting to pop.
Huberdeau is a pure playmaker. Tyler Toffoli is a pure finisher. That’s a combination that makes a ton of sense on paper. And how about giving someone like Sean Monahan an opportunity, on a short leash, to see if he can rediscover his finishing touch on a line with one of the best passers in the sport? Failing that, how about someone like Paul Stastny or Evan Rodrigues in that spot?
If having separate Lindholm and Huberdeau lines works for the Flames, that would leave Mikael Backlund to drive the third unit. Backlund would arguably be the best third-line centre in the league, although he would still very much be Calgary’s second-best player at that position.
Having Backlund on the third line would give the Flames another strong defensive matchup unit. But casting Lindholm in a Barkov-type role would also give the Flames some leeway to potentially put less established players like Jakob Pelletier and Dillon Dube on a slightly more insulated Backlund line.
None of this is to say the Flames couldn’t play Huberdeau and Lindholm together in high-leverage situations, like when the Flames need a goal late in the third period. A Huberdeau–Lindholm–Mangiapane combo would have enough skill to rival any opposing forward trifecta in the league.
Still, Huberdeau has shown he can thrive in situations where he’s the only star on his line. He might be the key to the Flames unlocking some additional secondary scoring in their lineup.