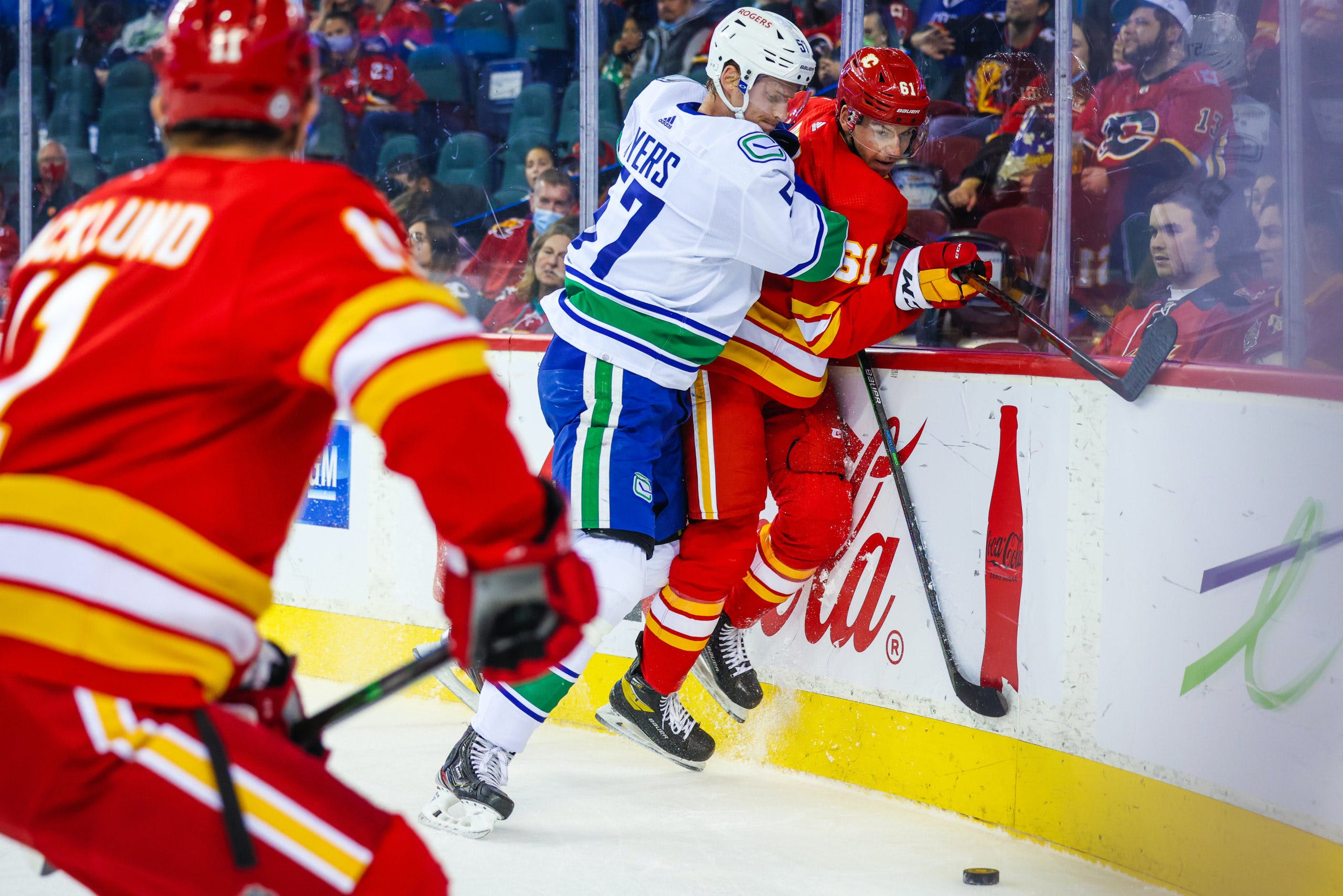 By Mike Gould
1 year ago
Calgary Flames prospect Walker Duehr is fast. Deceptively fast.
The 23-year-old winger has put his impressive wheels on display on a consistent basis throughout the pre-season, routinely blowing by defenders while carrying the puck down the right side.
You’d be forgiven if you didn’t expect much out of the 6’3″, 211-pound Minnesota State Mavericks alum entering his first NHL training camp. His numbers in college, while respectable, don’t exactly jump off the page.
Duehr never scored more than 10 goals in a season at Mankato. He only cracked the 0.5 points-per-game barrier as a senior, registering 10 goals and seven helpers in 28 contests. Despite joining the Stockton Heat of the American Hockey League late in the 2020–21 season, he seldom played and registered no points in five games.
And yet … wearing No. 61, Duehr has stood out in a big way for the Flames in the 2021 pre-season. He even looks a little bit like a Dollarama version of famous No. 61 Rick Nash out there (and not just because of the number), combining great size and the ability to win puck battles with the fleetness of foot required to be an effective energy forward in the NHL.
Can Duehr pull off moves like this? Probably not … he’s at his best when he quickly moves the puck instead of trying to do too much with it.
Duehr’s game closely resembles that of former Flames spark plug Garnet Hathaway, who spent parts of four seasons in Calgary before signing a four-year deal with the Washington Capitals in 2019. Hathaway had similar numbers in college — he never scored more than six goals in a season with Brown University — but made the NHL in just his second season with the Flames organization.
In 2017–18, the 25-year-old Hathaway became a full-time big-leaguer; the next year, he was a key cog alongside Derek Ryan and Andrew Mangiapane on the Flames’ outstanding fourth line.
Obviously, nobody’s expecting Duehr to turn into the next Rick Nash (he should keep the number, though). However, the Flames sorely need another Hathaway and Duehr becoming that player would be a big deal for the team.
Duehr was one of only two Flames to take multiple shots at 5-on-5 in Wednesday’s shootout loss to the Seattle Kraken; in that game, he posted the second-most individual 5-on-5 expected goals on the team (according to Natural Stat Trick) but lagged a little behind with a 42.99 on-ice expected goals percentage at even strength.
He also helped set up Michael Stone’s game-tying goal after making an excellent defensive play to strip the puck at the Flames’ defensive blue line. He then galloped towards the Kraken zone with excellent speed and fired an accurate shot off the post; Stone picked up the rebound and fired it in.
On Friday, Duehr again ranked among Calgary’s leaders in shots and individual expected goals at 5-on-5. After playing with Justin Kirkland and Byron Froese on Wednesday, Kirkland spent Friday’s game with Mikael Backlund and Brad Richardson and saw a small uptick in total ice time (from 8:06 to 10:16).
Owing largely to the line of Johnny Gaudreau, Matthew Tkachuk, and Elias Lindholm picking apart the Canucks’ defence at every opportunity, Duehr’s 51.26 5-on-5 expected goals percentage actually ranked in the bottom half of the Flames’ individual figures on Friday. He still placed well ahead of former linemates Kirkland and Froese, who, along with Emilio Pettersen, fell way behind the rest of the pack with a dismal 5.64 expected goals percentage at 5-on-5 as a line.
The Flames will likely make some roster cuts after Saturday’s exhibition rematch against the Kraken. Entering the pre-season, it would not have been surprising to see Duehr part of the first group trimmed from the Flames’ ranks.
Now, it would be a surprise to not see Duehr remain with the big club after the next round of cuts. While he may not crack the NHL lineup this year, he’s made a strong first impression.
At this point, maybe that’s all he needs to Dueh.

Remember these? Here are three more players who stood out for reasons good or bad in Saturday’s game. This is not a list of the three best players.
3) Dustin Wolf. The pint-sized goalie played the third period in relief of Jacob Markstrom and was perfect, stopping all seven shots he faced. He made his best save while the Flames were shorthanded, pushing from left to right in his crease to rob Conor Garland after an impressive Canucks passing play.
2) Oliver Kylington and Chris Tanev. The lanky Swede remained with Tanev in Friday’s game. The duo continued their excellent play, ranking sixth and third on the Flames, respectively, in on-ice expected goals percentage at 5-on-5. Kylington’s offensive confidence and mobility combines with Tanev’s reserved style to create an optimal two-way defensive pairing that looks like it was created in a lab.
1) Johnny Gaudreau. Undoubtedly Calgary’s best player on Friday, Gaudreau opened the scoring off a beautiful passing play and continued to dominate throughout the game. At 5-on-5, he took five shots, attempted seven, and led the Flames with 0.52 individual expected goals. Gaudreau took an additional two shots with the man-advantage and attempted six. His line, with Elias Lindholm and Matthew Tkachuk, finished the game with a 69.14 expected goals percentage at 5-on-5; Gaudreau and Tkachuk were respectively named the first and second stars.
The Flames are back in action tonight as they take on the Seattle Kraken at 8:00 p.m. MT.
This article uses figures from Natural Stat Trick.
Uncategorized
Recent articles from Mike Gould