Flames 6, Oilers 4: Back in black—and in the black 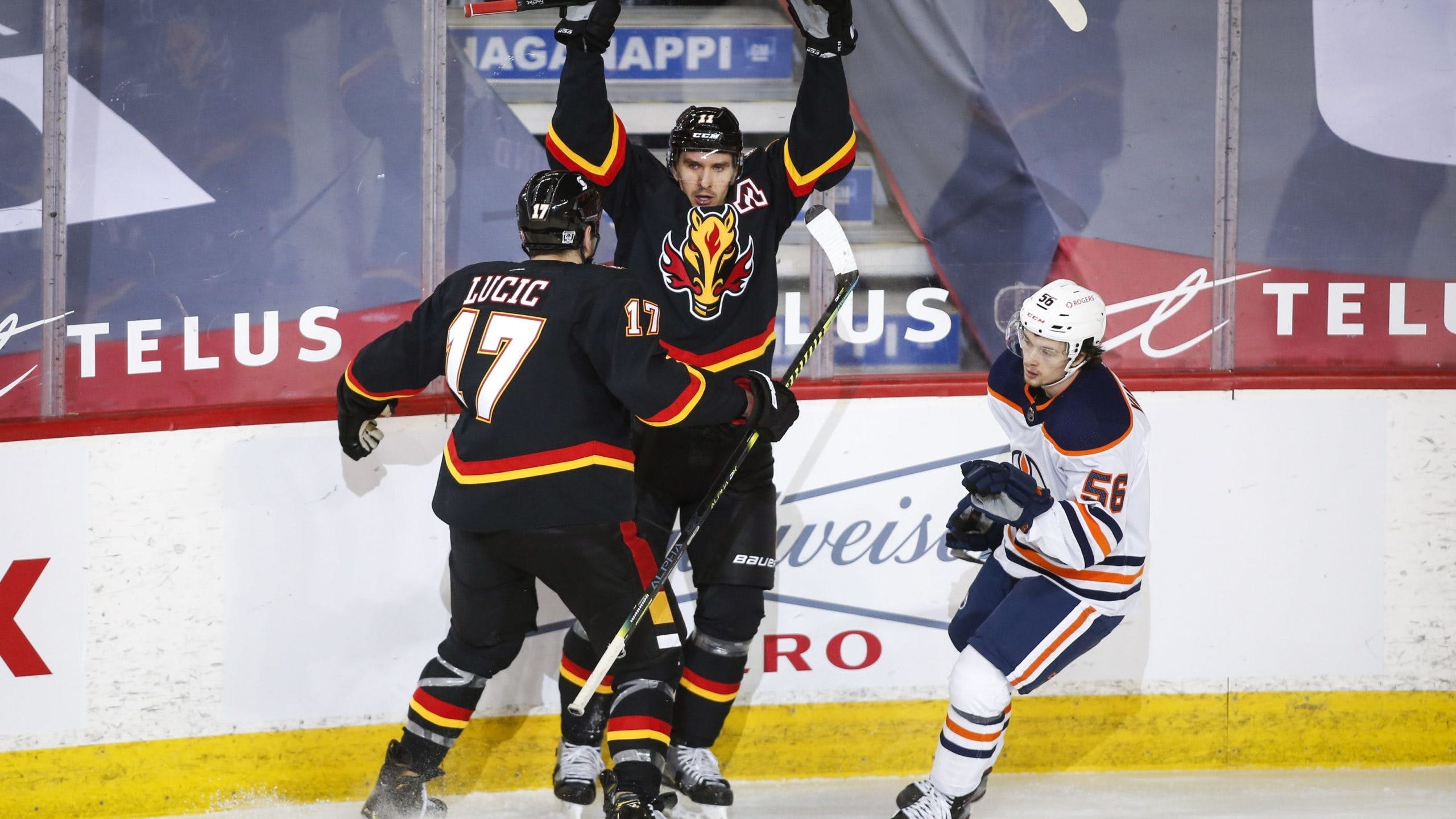 By Mike Gould
1 year ago
Keep those jerseys forever.
The Calgary Flames finally caught fire on Saturday, putting six goals behind Oilers goaltender Mikko Koskinen and successfully debuting their new “Reverse Retro” uniforms on home ice.
With the win, the Flames improved to 5-5-1 on the year, good for a .500 points percentage to rank fourth in the North Division. In short, they’re back in the black.
The jerseys, also black, looked incredible on the television broadcast and one can only hope that they will still be in the Flames’ rotation by the time fans are allowed back into the friendly confines of the Scotiabank Saddledome.
Beyond the aesthetics of the game, the Flames showed well after a difficult first period. They opened the scoring under a minute in but ended up getting outshot 17-3 in the opening frame, relying heavily upon Jacob Markstrom to keep things competitive.
The tide began to turn in the second period and it gives me great pleasure to say that one of the major catalysts behind the Flames’ turnaround was a certain former Oiler.

How about that? After a start to the 2020-21 season that could kindly be described as “slow,” Milan Lucic emerged on Saturday as one of the Flames’ more effective players and factored in on three goals.
One of the biggest concerns about Lucic’s 2019-20 season in Calgary was his general ineffectiveness against his former team. When Matthew Tkachuk and Zack Kassian were going at it in every Battle of Alberta match-up, Lucic was barely present. He recorded zero goals, one assist, and zero penalty minutes in his four games against Edmonton last year.
Lucic was anything but invisible on Saturday (amplified by how the Blasty jersey may have suited him better than anybody). With the score tied at two goals apiece, he lobbed a pass from deep in his own defensive zone up to a streaking Andrew Mangiapane, who connected with Mikael Backlund on the ensuing 2-on-1 to create a go-ahead goal for the Flames.
After Jesse Puljujarvi scored to make it 3-3, Lucic again helped the Flames respond. He provided the net-front presence on Dillon Dube’s power play goal just 2:56 into the third period, sneaking behind Adam Larsson and Darnell Nurse to get open while serving as a distraction for Koskinen.
Of course, Lucic’s biggest play in this game was his goal. The Oilers had scored two consecutive goals to close out the first period and the Flames entered the middle frame down by one. Early in the second, Lucic’s line, with Backlund and Mangiapane, cycled the puck effectively in the Oilers’ zone and the Flames’ big man was the eventual beneficiary of a pass by Mangiapane into the slot.
From there… well, a picture is worth a thousand words.

The only thing that could make this picture better is if Mike Smith was the Oilers’ goaltender. Yes, Edmonton’s number four is ex-Flame Kris Russell.
For reference, the scoring race in the Milan Lucic-for-James Neal trade now stands as follows:
Neal still leads, but the race is getting much tighter. On Saturday, the Flames controlled 78.37% of the 5v5 expected goals created when Lucic was on the ice; when Neal was on the ice, the Oilers controlled just 24.81% of the 5v5 expected goals.

Can somebody explain the fourth line?

The Flames inexplicably decided to use a fourth line featuring Joakim Nordstrom, Byron Froese, and Zac Rinaldo on Saturday.
Actually, “use” is a strong word, considering that Nordstrom played just 5:00 at even strength, Froese skated for 4:01, and Rinaldo saw just 2:04.
When Rinaldo and Froese were on the ice, basically nothing happened. To be fair to Froese, he did play 48 seconds of penalty killing time—during which he completely lost track of McDavid, who proceeded to score easily while wide open.
Nordstrom, meanwhile, had four shifts in the final six minutes of the third period and was used for the entire last 2:18 of the game. He also saw time at 4v4. Why? Hard to say. He took two bad offensive zone penalties but was rewarded with a ton of ice time while the Flames defended a lead.
When Nordstrom was on the ice, the Flames’ expected goals percentage dropped to just 4.20%. The team fired just two shot attempts towards Koskinen while Nordstrom was on the ice. Sure, Nordstrom was hammered with defensive zone deployments but that’s still a weak excuse for not being able to drive transitional play.
Through nine games, Nordstrom has taken just six shots and has attempted only 10. For comparison’s sake, healthy scratch Josh Leivo has attempted 28 shots through 10 games.
As for Rinaldo—why? By dressing Rinaldo (and Froese, albeit to a lesser extent), the Flames effectively shorthanded themselves on Saturday. Perhaps that turned into a good thing, forcing them to rely on their top guns instead of returning to the practice of elevating ineffective depth players while playing from behind. Rinaldo had three shifts on Saturday.
Still, it feels very unsustainable for the Flames to find success while dressing a fourth line comprised entirely of borderline NHL-calibre players (to put it generously). They need to bring Leivo back into the lineup and explore Glenn Gawdin and Matthew Phillips call-ups.