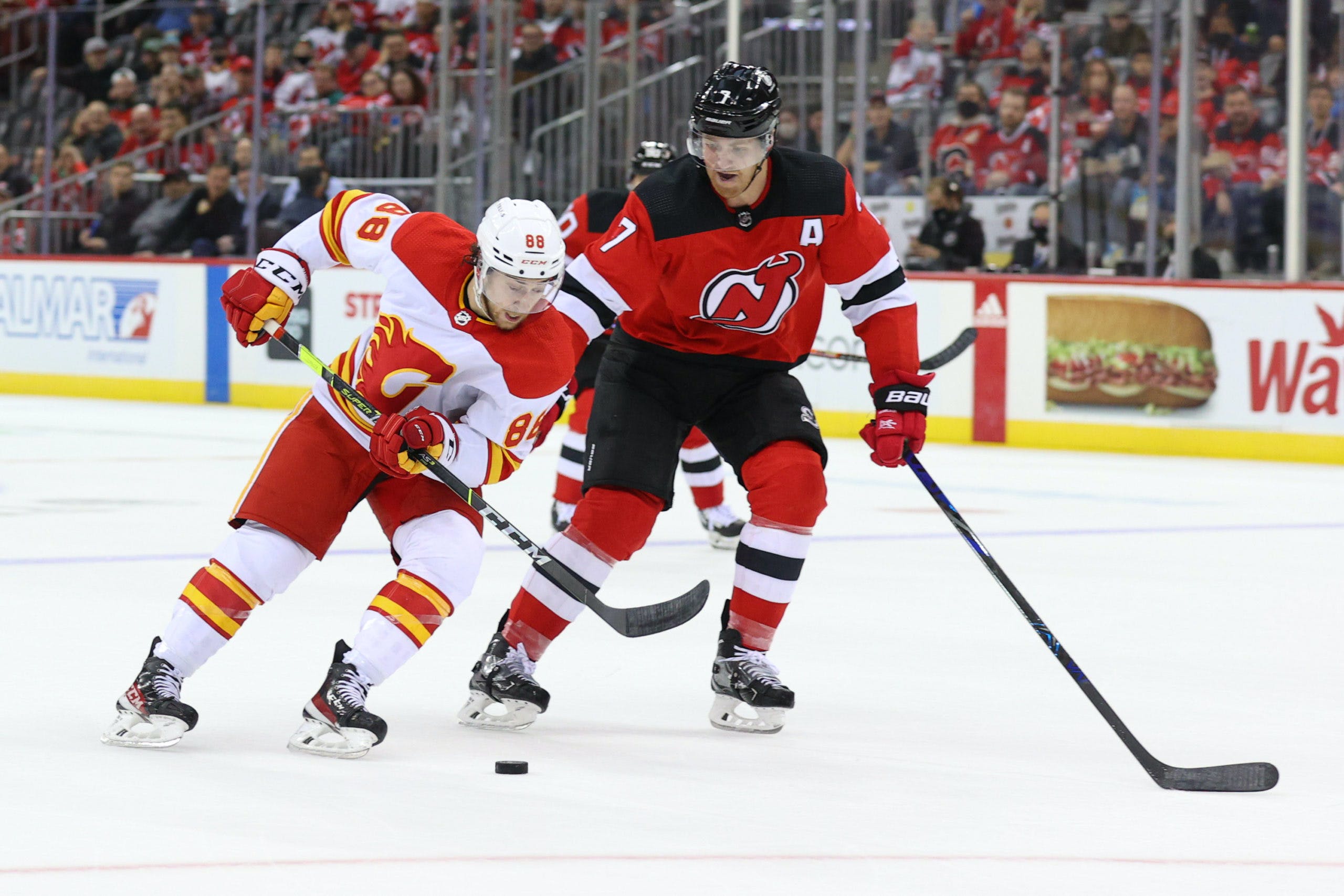 By Ryan Pike
2 months ago
Welcome to our game day content brought to you by NHL odds site Betway!
The Calgary Flames (5-4-0, 10 points) have lost three in a row, all at home. They’ll need to be at their best on Saturday night when they host the New Jersey Devils (8-3-0, 16 points), an unexpected powerhouse early in the season. The Devils’ promising young forwards are living up to their promise, and they’re one of the top teams in the Eastern Conference.
The battle begins at 8 p.m. MT on Sportsnet One, City TV and Sportsnet 960 The Fan!

Projected lines courtesy Daily Faceoff:
Huberdeau – Lindholm – Toffoli
Dube – Kadri – Mangiapane
Lewis – Backlund – Coleman
Lucic – Rooney – Ritchie
Hanifin – Andersson
Zadorov – Weegar
Mackey – Stone
Jacob Markstrom starts for the Flames, backed up by Dan Vladar. The extra healthy body appears to be Adam Ruzicka. Chris Tanev missed Thursday’s game with an upper body injury (and per Pat Steinberg, didn’t skate at Wednesday’s practice or morning skate on Thursday or Saturday). Since he’s not on the injury reserve, he is in theory an option for Saturday’s game but probably won’t play. We’ll see what we learn from warm-ups.
It appears that the Flames have gone back to their original lines that they used for the first six games of the regular season.
The Flames have lost three in a row. In the first two of those losses, the Flames largely played good games but unfortunately had third period lapses that saw their leads evaporate. In the third game, on Thursday, they were decidedly the second-best team on the ice against Nashville. Several players termed their showing “unacceptable.”
Expect the Flames to be playing a little bit pissed off, and quite a bit motivated to our-work a very strong New Jersey club. They’ll need to be at their best against the Devils.

Projected lines courtesy Daily Faceoff:
Tatar – Hischier – Zetterlund
Haula – Hughes – Bratt
Sharangovich – Mercer – Boqvist
Wood – McLeod – Bastian
Siegenthaler – Hamilton
Graves – Marino
Smith – Severson
Vitek Vanecek likely starts for the Devils, backed up by Akira Schmid, recalled from AHL Utica this morning. Mackenzie Blackwood left Thursday’s game against Edmonton and he’s not on the injury reserve (yet) but seemingly not an option for Saturday night. As of Saturday morning, Jonathan Bernier is (a) skating again but (b) still on the injury reserve. Hence: Schmid had been summoned from the AHL. The projected extra skaters for the Devils are Kevin Bahl and Alexander Holtz.
There are a lot of exciting, positive stories for the gents from Newark:
Despite the injury to Blackwood, the Devils are a fun, up-tempo, confident hockey club right now.

The Flames are without Oliver Kylington and Chris Tanev.
The Devils are without Ondrej Palat, Jonathan Bernier and Mackenzie Blackwood.

This is the first of two games between these teams this season. The Flames won both of their meetings with the Devils last season.