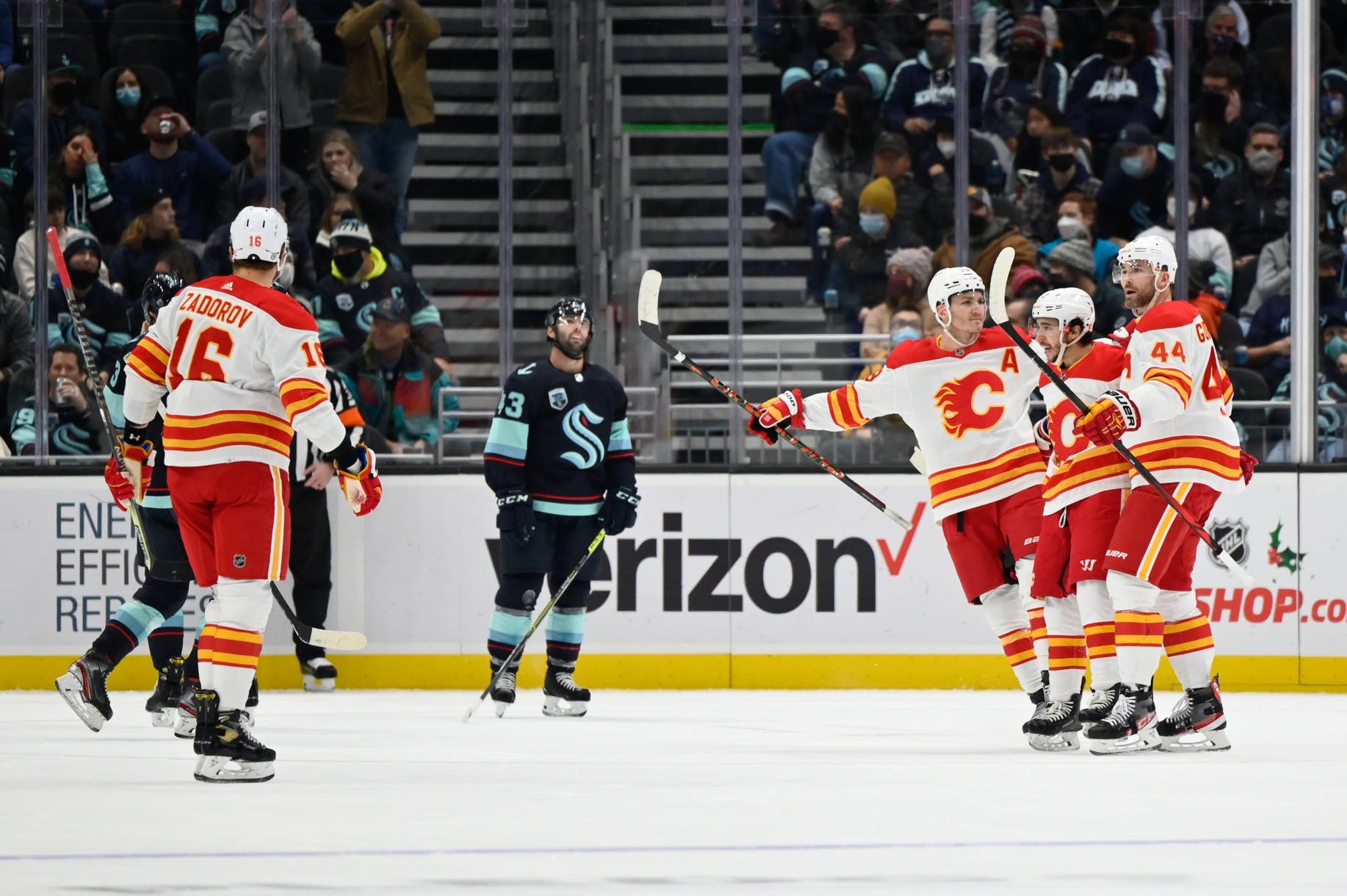 By Ryan Pike
9 months ago
Seven months after leaving the club, Mark Giordano returns to Calgary on Saturday night! His former club, the Pacific-leading Calgary Flames (28-13-6, 62 points), faces his new club, the last-place Seattle Kraken (13-30-4, 36 points) in what’s sure to be an eventful and emotional evening. If you’re one of the 9,600 in attendance, make sure you’re loud.
The puck drop is just after 8 p.m. MT! The game will be on Sportsnet West (and One and City TV) and Sportsnet 960 The Fan. The Flames will honour Giordano prior to puck drop, so get there early!

Projected lines via Daily Faceoff:
Gaudreau – Lindholm – Tkachuk
Coleman – Backlund – Mangiapane
Dube – Monahan – Toffoli
Lucic – Ruzicka – Lewis
Hanifin – Andersson
Kylington – Tanev
Zadorov – Gudbranson
@Jacob Markstrom starts for the Flames, backed up by @Daniel Vladar. Calgary’s active extras are @Brett Ritchie, @Michael Stone and @Brad Richardson. It looks like there won’t be any changes from a Flames group that’s been playing quite well lately (and has recently added @Tyler Toffoli).
What’s left to say about the Flames? They’re one of the better teams at generating chances in the NHL, one of the better teams at suppressing chances in the NHL, and they’re one of the NHL’s most consistently potent offenses this season. If you’re looking to criticize, their power play hasn’t been amazing at scoring lately (though it’s been generating chances).
As usual, keep your eye out for the top line of @Elias Lindholm, @Matthew Tkachuk and @Johnny Gaudreau tonight, as they’re likely to be difference-makers if the Flames are going to pick up points.

Projected lines via Daily Faceoff:
Johansson – Wennberg – Eberle
Donato – McCann – Donskoi
Jarnkrok – Gourde – Appleton
Sheahan – Czarnik – Blackwell
Giordano – Larsson
Dunn – Lauzon
Fleury – Oleksiak
We’re expecting @Philipp Grubauer to start, backed up by @Chris Driedger. The Kraken’s extras are @Will Borgen, @Carson Soucy and former Flames forward @Morgan Geekie.
It’s been a challenging inaugural season in the Emerald City. The Kraken have battled injuries, COVID, more injuries and more COVID, and as a result they haven’t had the lineup consistency you would hope for. They’ve won twice in six outings in February, and they’re a likely seller when the trade deadline arrives.
But they have enough exciting young pieces that you can be assured they won’t be bad for very long, and they have the ability to steal games, too.

The Flames are healthy.
The Kraken are without Karson Kuhlman, Brandon Tanev and Jaden Schwartz.

The Flames returned from their COVID Christmas break and beat Seattle by a 6-4 score back at the end of December.