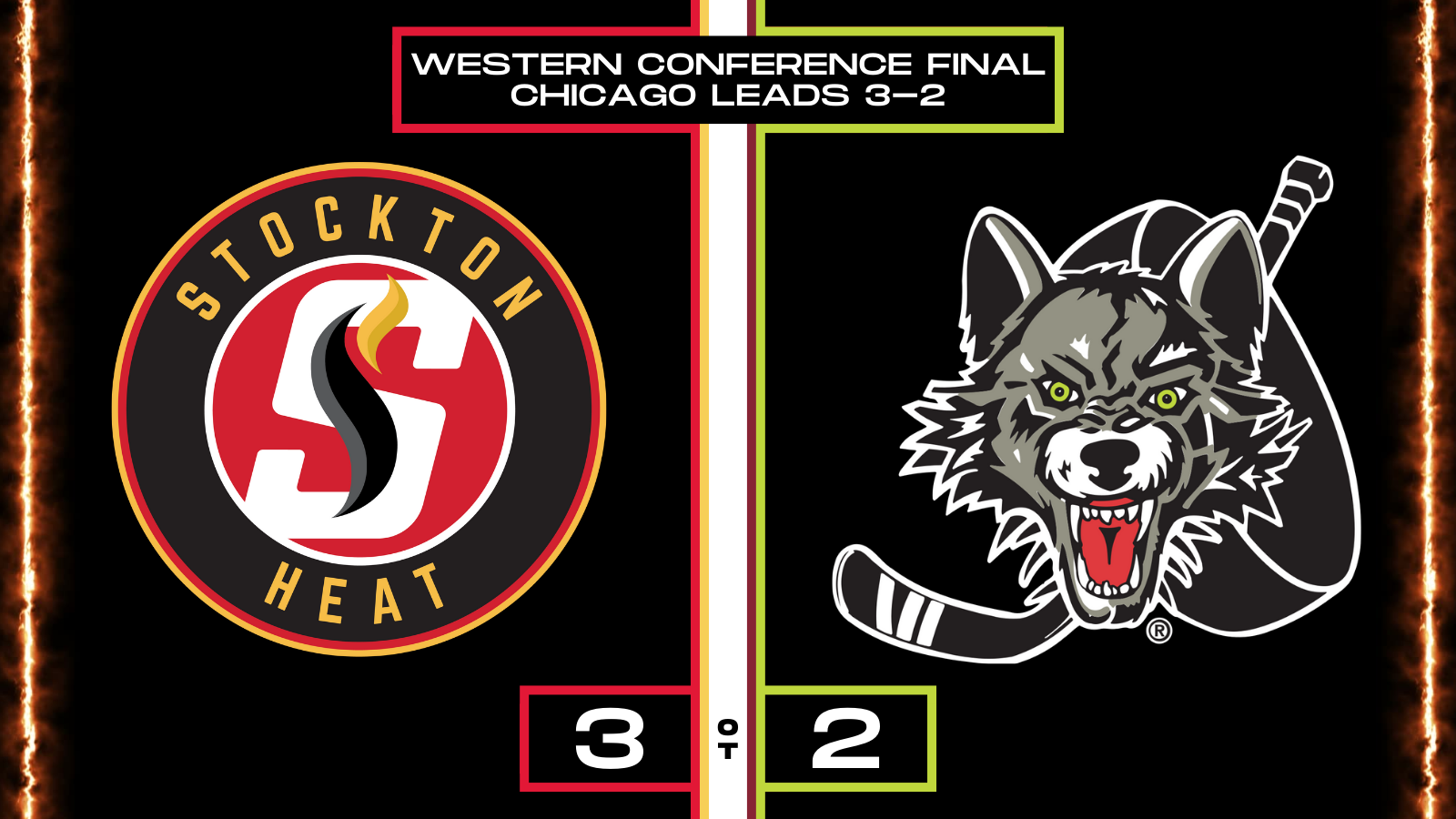 By Paige Siewert
5 months ago
The Stockton Heat despite taking an early 3-0 series deficit against the Chicago Wolves, have come back to a 3-2 record with overtime wins on back-to-back nights. On Saturday night, they went goal for goal with Chicago to carry them through regulation and in overtime, it was Connor Mackey that was the hero to lead the Heat to game six and hopefully beyond.

It was a night with Josh Leivo kept quiet on the goal side of things so that’s a good night for the Heat. Every game for the rest of the series has a lot at stake, especially for the Heat. They played through 20 minutes to start the game and neither team was able to find the back of the net.
In the second, the Wolves scored the type of goal that cuts a little deeper when you’re this far into the postseason with an early shorthanded goal. 3:28 into the second period, the Wolves took a 1-0 lead over the Heat.
Quite a bit later into the period, Walker Duehr got one back for the Heat with a deflection goal front and center to the Wolves net. Nick DeSimone and Connor Mackey picked up assists.
They finished up 40 minutes, tied at one and the Wolves ahead 25-16 in shots on goal.
In the third, Jakob Pelletier scored his first goal of the series and fourth goal of the playoffs 3:27 into the period. Pelletier parked himself right in the slot and waited for a timely rebound to put the Heat up 2-1 in this game. Martin Pospisil and Byron Froese were given helpers for this go-ahead goal.
Just shy of the midway mark of the third, the Wolves scored their second of the night on the power play. This carried them through regulation and once again into overtime for the second night in a row. Not very good for the heart rate when you are still on the edge of elimination.
In overtime, a certain play could have ended this game about two game minutes earlier than it actually came to a close. Chicago goaltender, Alex Lyon hugely misplayed the puck and coughed up a turnover for Justin Kirkland to pick up and bury the game-winner in a wide-open net. So what happened? Instead, Lyon threw his stick at Kirkland to break up the play. The worst part of this? There wasn’t even a penalty called on the play.
Thankfully, that was not a turning point for the Heat and their playoff run as they know it. They were able to overcome obvious frustrations from this awful miscall and scored about two minutes later with a blocker-side wrist shot off the stick of Connor Mackey. Byron Froese and Justin Kirkland picked up assists on the game-winner.
The Heat held on to win 3-2 in overtime with Dustin Wolf stopping 37/39 Chicago shots.

The mystery of a certain missing player

There is a noticeable absence from the lineup. That being, Adam Ruzicka. Ruzicka came down from his Flames call-up when the Flames’ season came to an end and was expected to be a series regular for the remainder of the Heat’s postseason run. As long as that ends up being. However, he has not been seen in a Stockton uniform since game one of this Wolves series.
There have not been any announcements or confirmations from the Heat as to what the reason is for Ruzicka’s absence. Considering the time of year and the nature of playoffs, the logical explanation is he is battling some sort of existing or newly emerged injury that happened in one of the Heat’s two playoff games he was able to skate in.
With a player like Ruzicka getting off on such a hot start for this team in the regular season to the point where he practically spent the rest of the year up with the NHL parent team, it doesn’t make a lot of sense for him to be healthy scratched when this team needs production the most. Teams across the NHL and AHL are usually hush hush when it comes to postseason injuries and don’t usually provide updates until their season comes to an end. Usually, the reason is there may be an opportunity for that player to get into a few games even if they’re not fully healed. All signs point to that being the case for Adam Ruzicka.

The Heat have concluded the Stockton side of this series and hit the road to play games six and seven in Chicago for a pair of midweek games on Tuesday and Wednesday evenings. They have yet to win a game in Chicago in this series and they can’t lose sight of the fact they are still in a possible elimination position. They have two more games to put forth their best effort to make it to the finals and battle it out for the Calder Cup.
They sit behind one game in this series down 3-2 after five games. Their next game on Tuesday night will get started at 6:00 pm (MT).