Heat Post-Game: Abbotsford gets their revenge 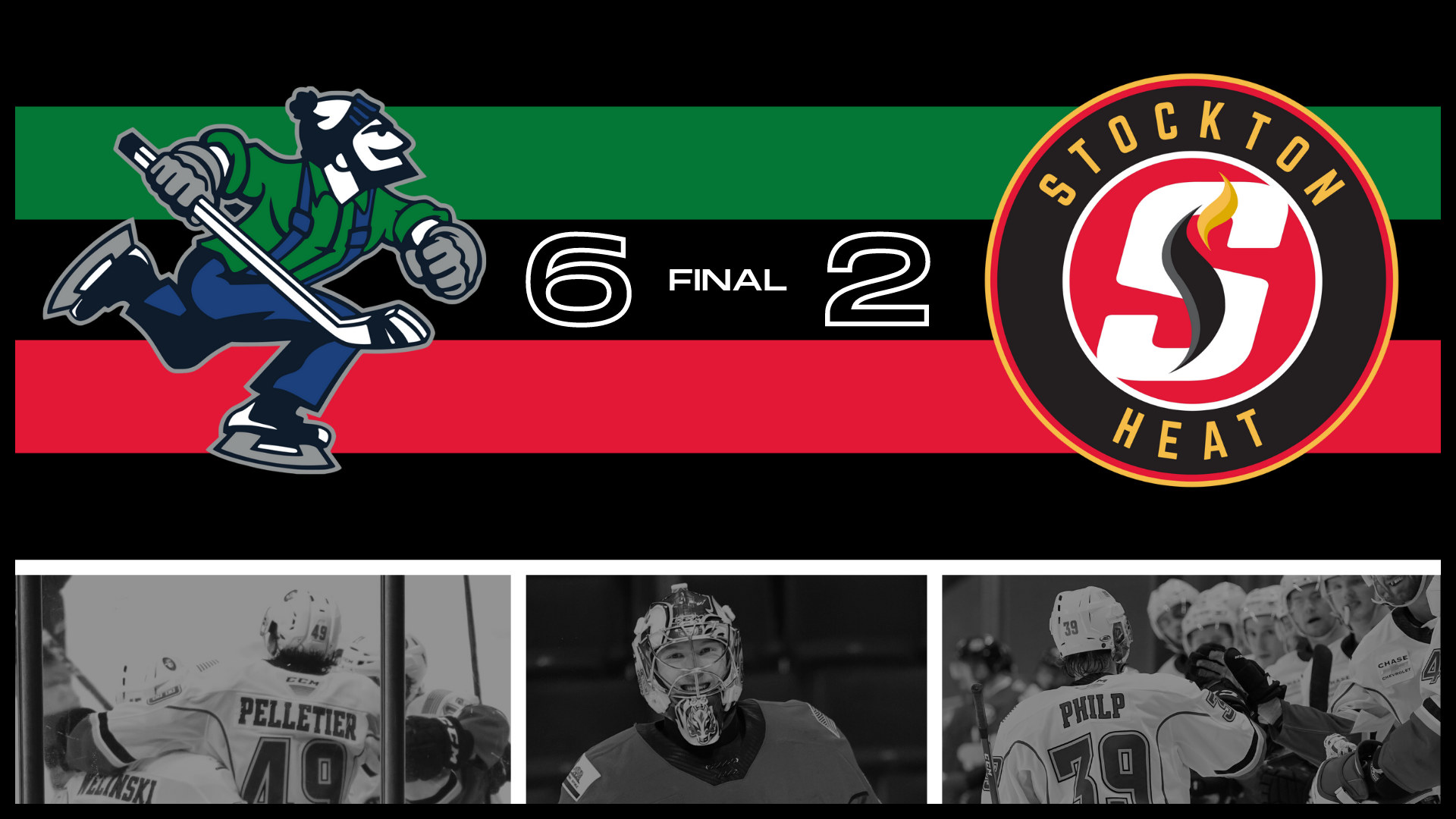 By Paige Siewert
10 months ago
All good winning streaks must come to an end and the Abbotsford Canucks are the latest culprits. Up until Sunday evening, the Stockton Heat had yet to lose to the Canucks ever since they joined the league this season. They had won a perfect five games in a row and were looking to make it six with a weekend sweep. That was not the case as the Canucks came out with a spark and more high-danger scoring chances than they’ve brought in previous match-ups. It paid off for them as they held a comfortable lead for most of the game and won by a final score of 6-2.

It took the Heat two full periods to finally get on the board. By the beginning of the third, they were already down three goals but not completely out of the game. Dustin Wolf was back in net for back-to-back nights but was bested by some tough bounces and shots he didn’t quite see all the way in.
The first Abbotsford goal was shorthanded so that quickly took away any momentum the Heat were working with. Then in the second period, the Canucks were on a 5-on-3 that the Heat were about 22 seconds away from killing off. Bryon Froese and Glenn Gawdin were the two guys in the penalty box, so that did not exactly make things easier for them.
The Canucks got one more in the final two minutes and were up 3-0. Shots, however, Stockton doubled them up 27-13 with no goals on any of them. Of note, this was not the same goaltender the Heat saw on Friday night, with Michael DiPietro in net rather than Spencer Martin.
To start off the third, the Heat came out of the gates with a little more spark and a little more luck. Nick DeSimone buried a puck that rebounded off his teammates about four times before finding the back of the net. Glenn Gawdin and Matthew Phillips were credited with the assists.
Less than two minutes later, Luke Philp scored and closed the gap on the scoreboard. Connor Zary and Justin Kirkland picked up the assists.
This was it for the Heat’s production and even if the Canucks did not score another goal all night, it would not have been enough to win the game or even extend it to overtime. At the 9:55 mark in the third, the Canucks scored their fourth goal, making it a 4-2 game. Time wound down and Wolf was pulled to try and drum up some scoring. This backfired in this game and Abbotsford scored twice on the empty net.
The final score was 6-2 despite Stockton’s 36-18 shot advantage.

The Heat played eight games in the month of February and finished off with a 6-2 record. Two of those went to a shootout, but the rest were regulation wins and losses. They finish the month on top of the league with the Utica Comets and Ontario Reign behind them in the standings.

The Heat don’t play again until next Friday, Mar. 4 when they host the Bakersfield Condors at 8:00 p.m. MT then the San Jose Barracuda the next night at 7:00 p.m. MT. They will start getting back into the mid-week games again come the second week of March and will approach crunch time as playoffs approach. One loss does not harm their exceptional standings. For now, it is best to enjoy the Stockton Heat as the best team in the league and enjoy the depth of success this organization is displaying right now.