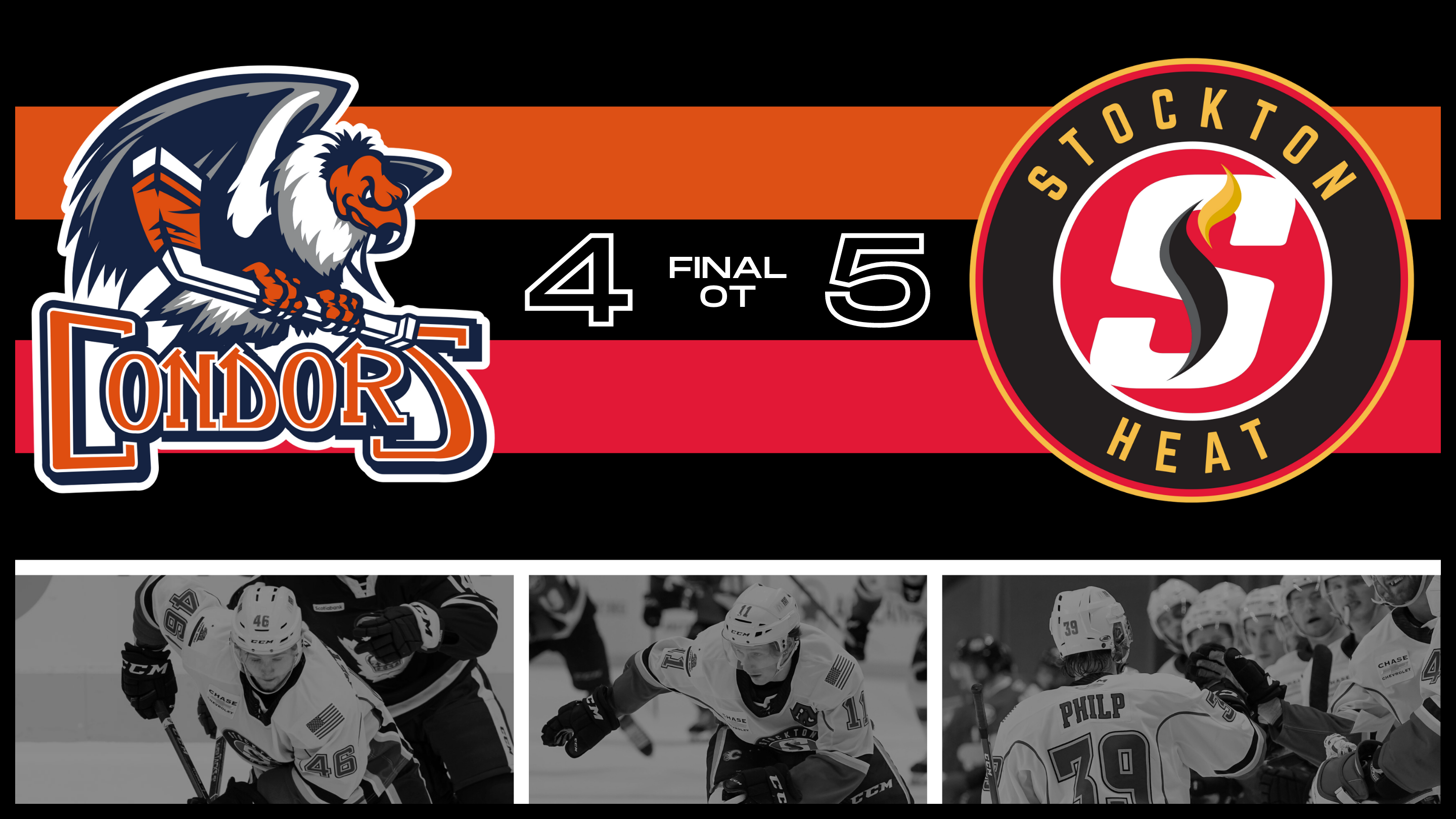 By Mike Gould
1 year ago
Make it eight straight wins for the Stockton Heat.
@Jakob Pelletier scored twice, including the overtime winner, while @Matthew Phillips and @Byron Froese each added a goal and an assist in Stockton’s 5-4 win over the Bakersfield Condors on Wednesday.
@Eetu Tuulola also scored for Stockton, which improved to 8-0-1 with the victory. Condors captain @Brad Malone recorded two goals and four points in the loss.
@Connor Zary made his season debut for Stockton in Wednesday’s game after missing the first eight games with a lower-body injury he suffered in Calgary Flames training camp.
He looked a little rusty, posting a team-worst minus-three rating (meaning he was on the ice for all three Bakersfield goals at 5-on-5) and failing to record a single shot on net. Zary scored three goals and seven points in nine games with Stockton last season.
Bakersfield outshot Stockton 45-26 in the game, including a 14-5 gap in the first period. @Dustin Wolf held the fort admirably in net for the Heat, making 41 of 45 saves to improve to 5-0-1 on the season. His .940 save percentage ranks second in the AHL among goaltenders with at least five starts.

Stockton got things started early in the first period, with @Jakob Pelletier converting on his team’s first shot of the hockey game.
After a botched clearing attempt by the Condors found its way onto @Matthew Phillips’ stick, Pelletier received a pass from Stockton’s No. 11 and quickly fired a shot past goaltender @Olivier Rodrigue.
Phillips picked up the lone assist on Pelletier’s third goal of the season, which came just 1:49 into the opening frame.
Heat forward @Luke Philp took a slashing penalty at the 2:03 mark of the period, giving Bakersfield the game’s first power play.
Despite playing down a man, Stockton was able to extend its lead just 23 seconds into Philp’s penalty when @Byron Froese broke in uncontested and beat Rodrigue between his legs with a quick wrister.
@Connor Mackey assisted on Froese’s second goal of the year, Stockton’s first shorthanded marker of the 2021–22 season.
Moments after Stockton’s captain gave his team a 2-0 lead, Bakersfield’s “C”-bearer answered right back.
After being left all alone at the foot of Stockton’s crease, @Brad Malone beat a helpless @Dustin Wolf on his backhand to bring the Condors to within a goal. @Vincent Desharnais and @James Hamblin picked up the assists on Malone’s third of the year, which came at the 6:19 mark of the period — less than four minutes after Froese’s tally.
Bakersfield outshot Stockton 14-5 in the first period. Nevertheless, the Heat were able to escape with their 2-1 advantage intact.
With Condors defenceman @Michael Kesselring in the box midway through the middle frame, Stockton was able to extend its lead to 3-1. @Matthew Phillips drove to the paint and impressively batted home a rebound before joining the puck in the net as a result of a nasty cross-check by Condors forward @Luke Esposito.
Phillips’ fourth goal of the season — and his second power-play marker in as many games — was assisted by Froese and @Adam Ruzicka and came at the 11:13 mark of the second period.
From there, all hell broke loose. Phillips’ goal kicked off a stretch where four goals were scored in exactly five-and-a-half minutes.
First, Condors forward @James Hamblin brought his team back within a goal at the 12:51 mark of the period. Malone and @Cooper Marody freed up the puck behind the Stockton net before it found its way to the slot, where Hamblin made no mistake in roofing it past Wolf for his third goal of the season.
Stockton answered back just 36 seconds later, with @Eetu Tuulola tipping a long-range @Glenn Gawdin shot past Rodrigue for his second goal in as many games.
Finally, at the 16:43 mark of the second, Kesselring scored after jumping up to join the Condors rush as a trailing attacker. Surprise, surprise: Marody and Malone picked up the assists on Kesselring’s first goal of the season.
Stockton exited the second period up 4-3 despite being outshot 17-10 by Bakersfield in the frame.
Bakersfield pressed hard for the tying goal early in the third period. Already sitting on two assists, Condors forward @Cooper Marody nearly added a goal on an impressive wraparound attempt less than five minutes into the final 20.
Always agile in the crease, Wolf managed to slide over and make a nice save.
The Condors finally managed to draw even just a few seconds later. With Froese in the penalty box for elbowing, Bakersfield won the ensuing faceoff in the offensive zone and almost immediately scored to tie the game at 4-4.
Malone picked up his second goal of the game off a nice move in tight, with @Seth Griffith and @Philip Broberg registering the helpers.
Stockton received its fourth power play of the game with just 1:26 remaining in regulation time, with Esposito heading off for high-sticking. The Heat were unable to capitalize in 62 seconds of 5-on-4 action before Phillips was called for cross-checking, negating the final 58 seconds of the power play and causing Stockton to spend over a minute down a man in overtime.
Moments after the Heat killed Phillips’ infraction, the recently-penalized forward pounced on the puck and raced in all alone against Rodrigue. With Broberg in hot pursuit, Phillips managed to protect the puck and get a shot off that Rodrigue was able to smother.
With overtime reset back to 3-on-3 action, Heat forward @Justin Kirkland turned the puck over the Marody at the worst possible time. The Condors forward broke in all alone against Wolf but failed to beat the 20-year-old goaltender.
The play quickly went back the other way, with @Connor Mackey immediately spotting Pelletier with a hard pass up the ice. Pelletier broke in on a 2-on-1 with @Luke Philp and fired a pass to his right that bounced off Condors defenceman @William Lagesson and past Rodrigue.
Game, set, match.
Stockton outshot Bakersfield by a 3-1 count in overtime.

Stockton’s top line came to play and its goaltender was on his game. Some nights, that’s all it takes to get the W.
Phillips, Ruzicka, and Pelletier combined for 10 of Stockton’s 26 shots in the game (with Ruzicka also barely missing the net on a couple of chances).
Wolf was somehow not named one of the game’s three stars despite stopping 41 of the 45 shots he faced, good for a .911 save percentage.

@Matthew Phillips was outstanding on Thursday, scoring a ludicrously impressive goal and deftly setting up @Jakob Pelletier’s third professional tally. He was named the game’s first star for his efforts.
Phillips very easily could have had three or four points in the game. He was buzzing all night long and kept trying to set up @Adam Ruzicka, who had a bit of trouble hitting the net in Thursday’s contest.
Phillips now has four goals and nine points in nine games with the Heat this season.

The Heat will play their first-ever game against the Henderson Silver Knights on Nov. 12 at 8:00 p.m. MT. You can catch that game on AHL TV; FlamesNation contributors Mike Gould and Paige Siewert will be posting updates on Twitter at @miketgould and @flames_update.
Uncategorized
Recent articles from Mike Gould