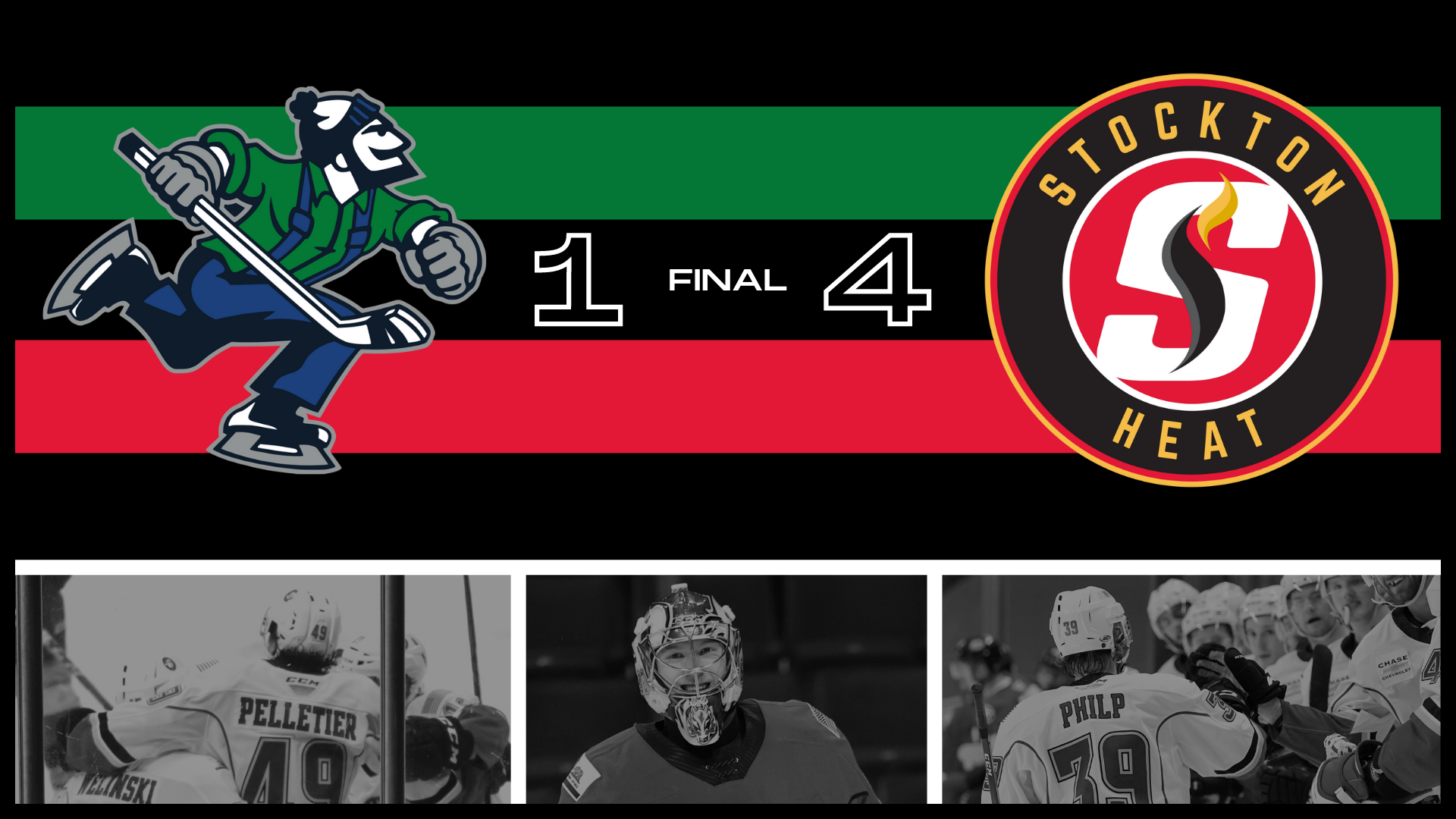 By Paige Siewert
11 months ago
The Abbotsford Canucks are the latest victims of the Stockton Heat’s reign as they once again come up short against their fellow Pacific Division opponent. They have yet to beat the Heat this season and as they just joined the AHL this year, they have actually yet to beat them in franchise history. Going into this weekend match-up the Heat were ahead 4-0 in their season record and have now extended things to 5-0 with a 4-1 victory on Friday night.

Being one of the best teams in the league requires some serious success on the road. The Heat have done an exceptional job, extending their road record to 14-5-0-1. In this Abbotsford game, their recipe for success showed itself early. Three out of the four Heat goals came in the first period. The scoring started very quick with Jakob Pelletier coming up on a rush alongside Matthew Phillips and Glenn Gawdin.
The Canucks gave the wrong guy a breakaway opportunity and that guy was Matthew Phillips. Phillips kept the ball rolling and scored his 20th goal of the season unassisted.
That wasn’t even the last of it through the first 20 minutes. The Heat found themselves on a power play opportunity late in the first and it was Byron Froese that would score on the man advantage. Froese scored at 18:35 with assists going to Jakob Pelletier and Connor Mackey.
Phillips almost made it four with seven seconds to go in the period. The puck looked as if it popped in and out of the net but just deflected off the crossbar. Despite the one-sided effort in the first, the Heat actually didn’t pepper in the shots as much as you may think. They finished the first ahead 10-9 in shots.
In the second period, scoring cooled off and the Heat enjoyed a comfortable lead. The Canucks did get one back at 11:08 on the power play. This was the only successful power play for Abbotsford out of their six opportunities. The Heat did not answer back in the second but tacked on one more goal in the third.
Alex Gallant scored his second goal of the season at 12:57 and ensured the Heat would finish the game with a three goal lead. When the time on the scoreboard ran out, the Heat led by a score of 4-1 and just narrowly behind in shots 26-25. Dustin Wolf was in net for the Heat and earned his 22nd win of the season.

After this win, the Heat are the top team in the league and the second team to reach the 30 win mark. The Utica Comets have been a roadblock for the Heat in the standings but that has not prevented them from owning the Pacific Division for the majority of the season.
Also in the top three is one of their Pacific Division rivals, the Ontario Reign. The Reign are two wins behind the Heat and will need to do most of their work on their standings outside of their series against each other. The Heat will only play the Reign for one more series in early April.

One more to go

This road trip will be a little less demanding as the Heat get Saturday night off before they face the Canucks again on Sunday evening. You’ve got to think after five straight losses to the Heat, the Canucks are starting to get antsy and will want to pull out all the stops to try and at least keep things close if not, pull out a win. The streak watch will continue and puck drop on Sunday will be at 5:00 p.m. MT.