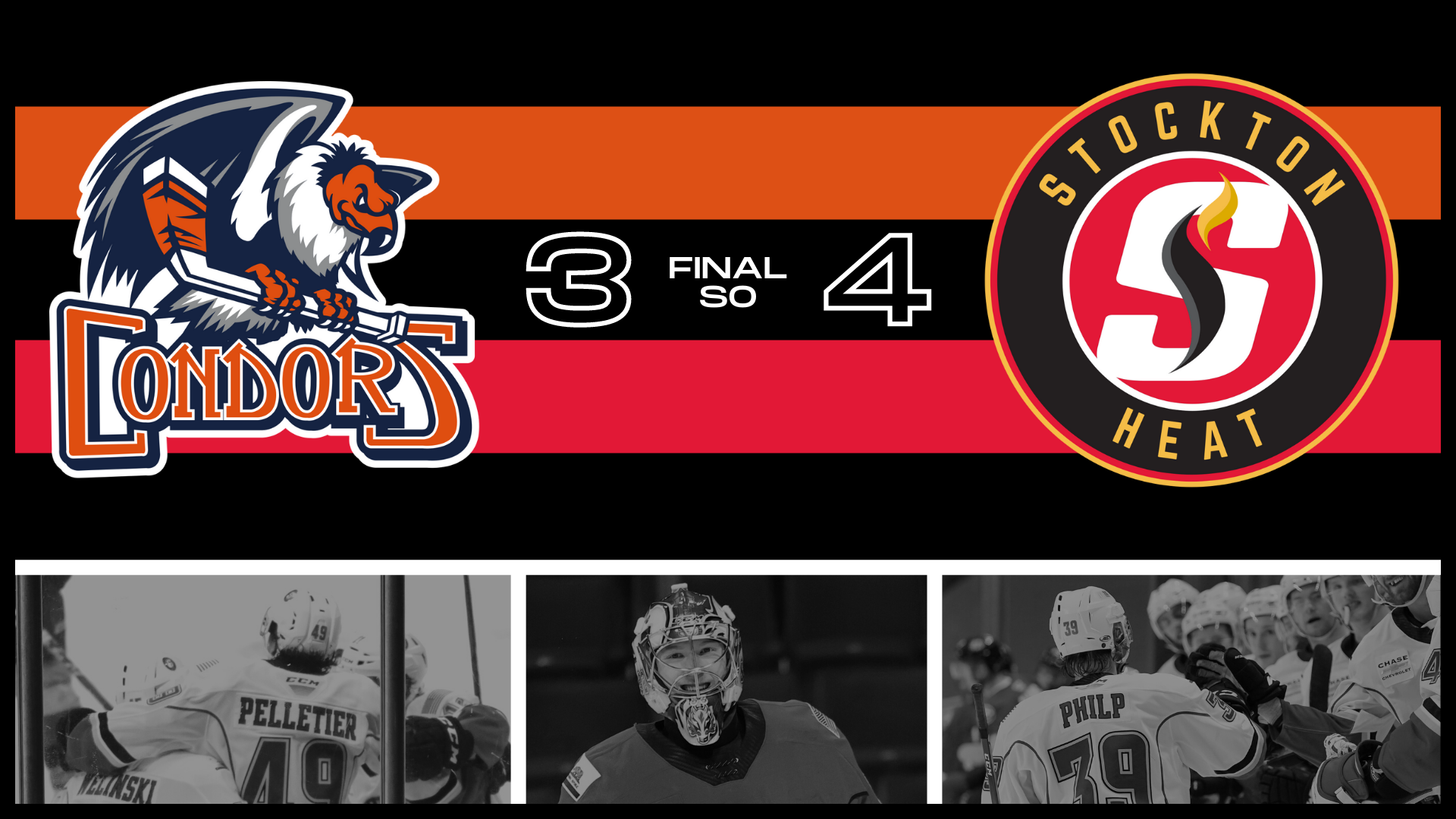 By Paige Siewert
11 months ago
The Heat faced off against the Bakersfield Condors for their first game in a week and their first game against the Edmonton Oilers affiliate since Dec. 15. Stockton has had a perfect season series against the Condors with the last two games being decided in a shootout and in overtime. Their game on Saturday night continued the trend as the Heat were victorious in a five-round shootout.

It was a big night for special teams scoring as both sides picked up a pair of goals on the man advantage. Stockton piled on the shots through the first period but it was ultimately the Condors that would find the back of the net first. The first power play goal would go to Stockton at 12:58 when Jakob Pelletier chipped in a puck on a scrambling play in front of the net. Matthew Phillips and Connor Mackey got the helpers.
With just over two and a half minutes to go in the period, Luke Philp also scored to break the tie and earn the Heat their first lead of the night. His goal happened when he was up on the rush with Connor Zary and Zary made some room for him deep in the Condors zone. Naturally, Zary picked up the assist on Philp’s goal alongside Justin Kirkland.
Stockton really made Bakersfield goaltender, Stuart Skinner work for it as they finished the opening period with 18 registered shots to the Condors six.
Very early in the second period, the Condors had their first successful power play and tied things up at 1:20. It was a perfect shot off the crossbar that Adam Werner did not have much of a chance on at all.
The second period finished up 2-2. In the third, it was the Heat that would pull ahead first. Justin Kirkland scored even earlier into the period. Just a mere 22 seconds in. This was also on a power play that the Heat had less than 40 seconds to work with after it carried over from the previous period. Connor Mackey and Matthew Phillips picked up their second assists of the night off of Kirkland’s 12th goal on the season.
The early scoring was not enough to hold a lead through the final 20 minutes of regulation as Bakersfield tied things up at three at 7:29. There was not a whole lot of discipline in this game as both sides were summoned to the box seven times a side.
Around the midway mark of the period, the Heat appeared to have a huge power play opportunity to take back their lead but they were called for tripping off the following face-off. The constant calls made it difficult to find some consistency and while the power play goals were good for the Heat, their opponents were also keeping pace.
The third period came to a close without either team breaking the tie and the same story carried out through overtime and three rounds of the shootout. The crowd finally saw the lamp light up when Bakersfield’s fourth shooter beat Adam Werner. It was up to Connor Zary to keep the Heat alive in this game and he delivered. In the fifth round, Bakersfield missed and the game was on Juuso Valimaki’s stick. This was his first shootout attempt this year and he was very successful. Valimaki was the hero in this game and with his game-winner he was also awarded the first star of the night.

This weekend series is a bit of an odd split series as the Heat hit the road to Bakersfield on Saturday but will host the same team on Sunday at home ice. Even though the Heat have been very successful up until this point, Bakersfield is not an opponent to step off the gas for. Last season, they finished second in the Pacific Division and went on to win the Division Title against the Henderson Silver Knights in replacement of the cancelled Calder Cup run.
At this point, the Condors are third in the Pacific Divison and it is in the Heat’s best interest to keep them at bay. Their fifth match-up of the season will take place on Sunday night at 6:00 p.m. MT.