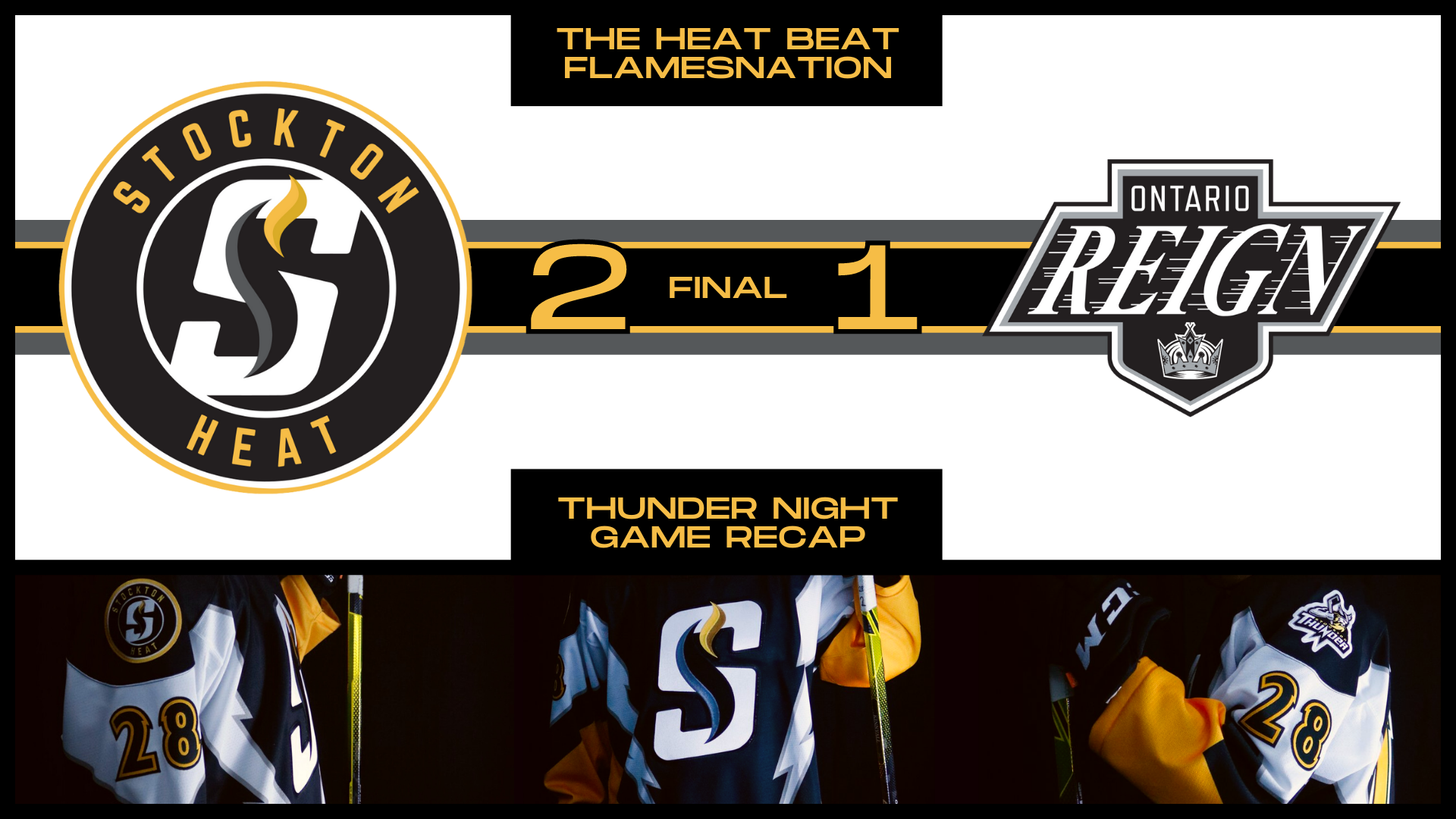 By Mike Gould
1 year ago
A pair of recent Calgary Flames first-round draft picks returned to the lineup for the Stockton Heat in Saturday’s 2–1 win over the Ontario Reign.
The Heat added forward @Connor Zary to their lineup after he missed Stockton’s previous four games with an upper-body injury. Furthermore, defenceman @Juuso Valimaki returned from his five-game absence with a lower-body injury.
While Zary managed to come back mostly without incident, Valimaki’s return ended prematurely after he was assessed a game misconduct for physical abuse of officials early in the third period. As a result of this penalty, Valimaki will automatically receive a three-game suspension (pending a review by American Hockey League president Scott Howson).
Saturday’s game was “Turn Back the Clock” night for the Heat.
From 2005 to 2015, the ECHL’s Stockton Thunder played out of Stockton Arena and grew a large fanbase in the community. In recognition of this, the Heat skated onto the ice against the Reign on Saturday wearing jerseys of yellow, black, silver, and white.
Oh, and did we mention the lightning bolts running down the front of the jerseys? Because there were these really cool lightning bolts … well, just take a look at these pictures to get a better idea of the overall look.
While it took some time to get used to Stockton wearing uniforms completely devoid of any red, @Matthew Phillips still looked as good as ever on Saturday.
The 23-year-old forward added to his cushion atop the team’s goal-scoring leaderboard with the eventual game-winning marker late in the first period. With the Heat killing a @Reid Perepeluk interference minor, Phillips took advantage of a Reign turnover in the neutral zone and skated in on a shorthanded breakaway against goaltender @Matthew Villalta.
Phillips roofed a wrister over Villalta’s glove for his team-leading 14th goal in just 32 games this season. The 2016 sixth-round pick also reached a couple of career milestones on the play:
Phillips recorded four shots on goal on Saturday and was ultimately named the game’s first star. He and @Jakob Pelletier both have 33 points this season, but Phillips has appeared in just 32 games — two fewer than Pelletier’s 34.
@Luke Philp scored Stockton’s other goal in the game, with @Ilya Solovyov and @Johannes Kinnvall picking up the helpers.
Heat goaltender @Dustin Wolf stopped 32 of the 33 shots he faced for his AHL-leading 18th win of the 2021–22 season. Wolf, 20, now has an 18–2–3 record and also leads all qualified AHL goaltenders (min. 660:00 TOI) with a .932 save percentage in his 23 games this year.
Stockton went with this lineup against Ontario on Saturday:
@Jakob Pelletier – @Glenn Gawdin – @Matthew Phillips
@Emilio Pettersen – @Luke Philp – @Walker Duehr
@Justin Kirkland – @Martin Pospisil – @Eetu Tuulola
@Mark Simpson – @Connor Zary – @Reid Perepeluk
@Juuso Valimaki – @Nick DeSimone
@Kevin Gravel – @Colton Poolman
@Ilya Solovyov – @Johannes Kinnvall
@Dustin Wolf (starter) – @Adam Werner
The Heat will have the next three days available to them for rest and practice. After that, they’ll return to action on the road for a back-to-back set against the Abbotsford Canucks on Feb. 3 and 4.

Looking to up your fantasy hockey game? DailyFaceoff has the tools you need for both daily and season-long fantasy leagues, including a lineup optimizer, daily projections, and a whole lot more. Sign up for the DailyFaceoff tools here.
More from Flames Nation
Uncategorized
Recent articles from Mike Gould