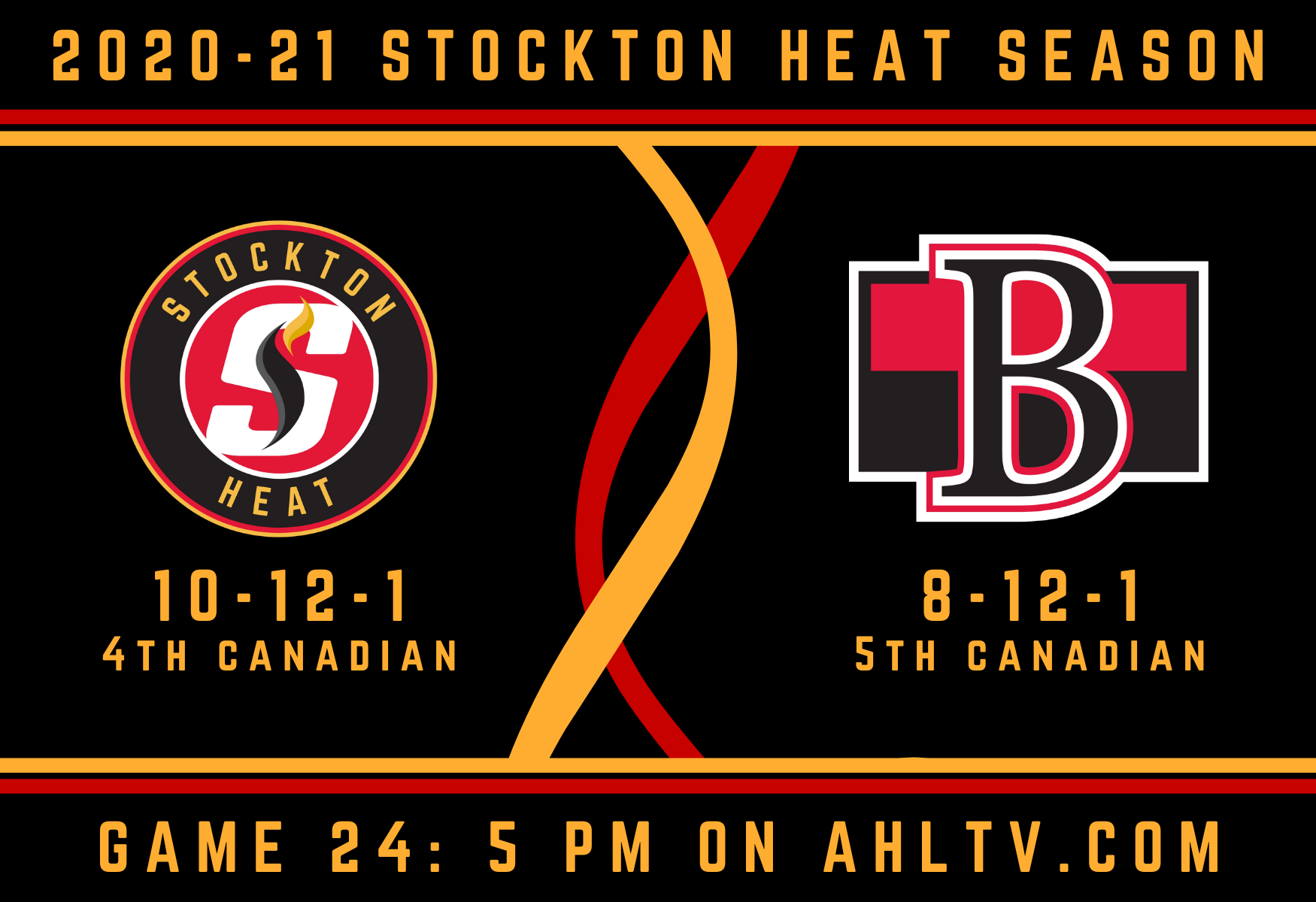 By Mike Gould
1 year ago
There’s no getting around it: The Stockton Heat are in a rut.
The Heat have won just two of their last 13 games, dropping decisions to each of their four Canadian Division rivals during that stretch.
Most recently, they lost to the last-place Belleville Senators on Wednesday. The Heat battled hard and pushed for a game-tying goal while down 3-2 in the third period, firing 14 consecutive shots but failing to get that all-important third goal.
Stockton and Belleville will meet again on Thursday afternoon for the second half of a back-to-back. With Tyler Parsons still unavailable, it remains to be seen whether the Heat will stick with Garret Sparks in goal—he made 28 saves on Wednesday—or give Andrew Shortridge his first start with the team.
Shortridge, 25, spent the last two seasons in the San Jose Sharks organization and played 15 games for the AHL’s San Jose Barracuda, going 3-8-0. He played four games for the Kansas City Mavericks, the Calgary Flames’ ECHL affiliate, earlier this season and went 2-1-0 with a .943 save percentage.
Zac Leslie and Matthew Phillips scored Stockton’s two goals on Wednesday. Phillips also recorded an assist and moved one point behind the recently recalled Adam Ruzicka for the Heat team lead in scoring.

Stockton — Glenn Gawdin. After leading the 2019-20 Heat with 47 points (16 goals, 31 assists) in 54 games, Gawdin has just two goals and nine assists in 19 games this season and has struggled to generate offense in any situation.
Gawdin finding his groove would likely be a massive boon for linemate Emilio Pettersen, who has just two points (one goal and one assist) in his last 13 games.
Matthew Phillips spent the first part of Wednesday’s game with Giorgio Estephan as his centre but was eventually moved to a line with Gawdin. That combination started to click in the third period and it remains to be seen whether it will stay intact on Thursday. Phillips and Gawdin played much of the 2019-20 season together.
Belleville — Egor Sokolov. Sokolov offers a tantalizing combination of size and skill. He somehow went undrafted twice before being selected by Ottawa in the second round of the 2020 NHL Entry Draft.
Standing 6’3″ and weighing in at 222 pounds, Sokolov is already a beast at the AHL level despite not turning 21 until June. He has 10 goals in his first 21 professional games and beat Sparks with a beautiful shot on Wednesday.
Sokolov is coming off a 2019-20 QMJHL season where he scored 92 goals (46 goals and 46 assists) in just 52 games. It’s safe to say he’s carrying some of that momentum with him into Ottawa’s professional system.