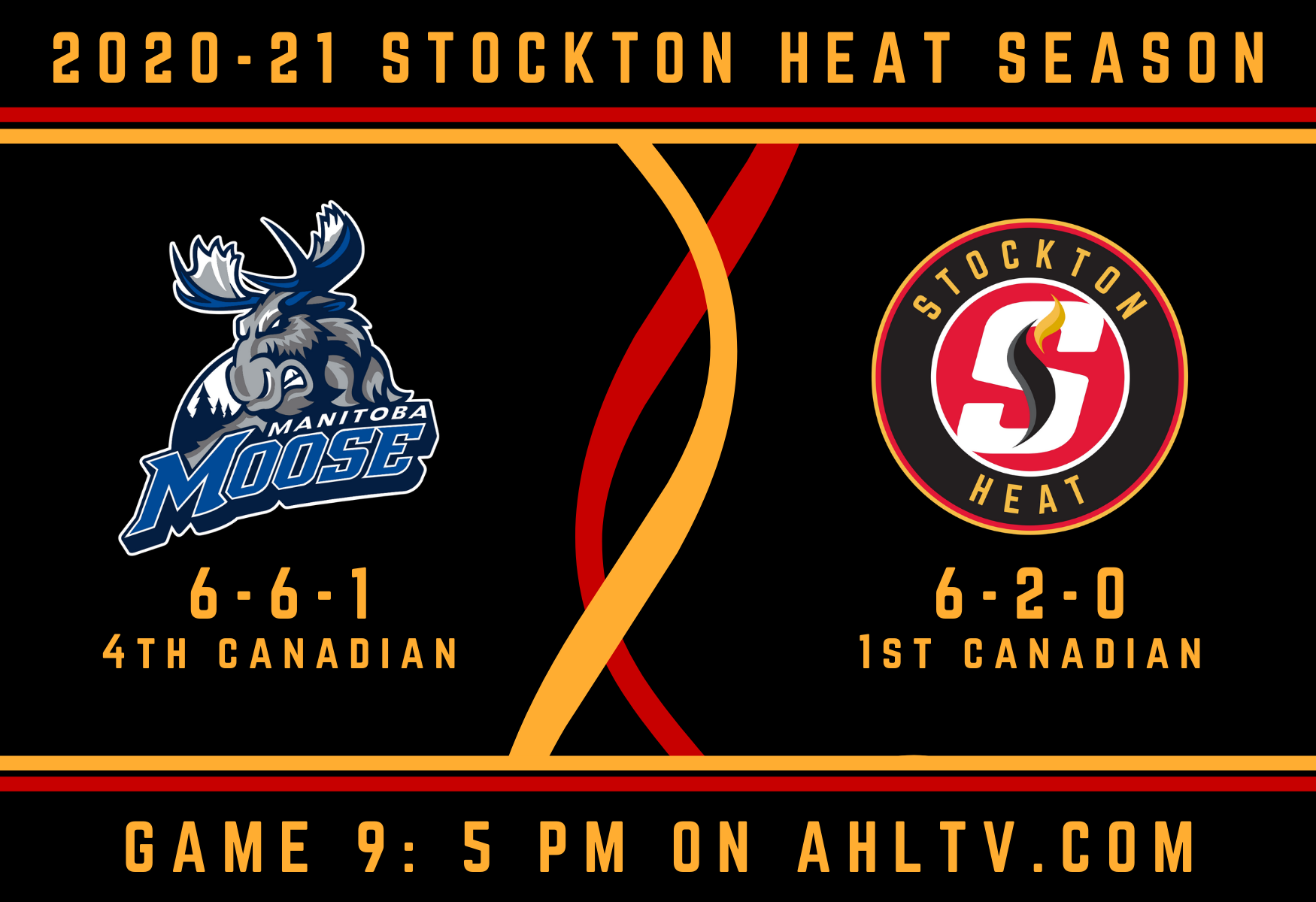 By Mike Gould
1 year ago
After winning each of their last six games, the 6-2-0 Stockton Heat currently boast a one-point lead over the Laval Rocket for first place in the AHL’s Canadian Division. The Rocket and Heat have yet to meet this season, with Laval currently sitting at 5-3-1 after its first nine games.
Stockton will look to add to that cushion in its own ninth game tonight, the second of four consecutive meetings against the Manitoba Moose. With a 6-6-1 record, Manitoba currently sits in fourth place in the division but has points in its last three contests (2-0-1).
On Monday evening, the Heat and Moose met at Winnipeg’s BellMTS Iceplex and played a tight, back-and-forth game featuring three game-tying goals for the home side. Manitoba battled back from 2-0, 3-1, 4-3, and 5-4 deficits but ultimately fell in overtime by a 6-5 score.
Glenn Gawdin sealed that win for the Heat with his first goal of the season in any league. After one game with Switzerland’s EHC Visp, five games in the NHL with the Flames, and three contests after being re-assigned to the Heat, Gawdin still remained at the zero-goal plateau in 2020-21. In his fourth AHL game of the year, Gawdin posted his second assist before tallying just 34 seconds into overtime off a nice feed from Luke Philp.
Heat captain Alex Petrovic and rookie Emilio Pettersen led the way for the team on Monday. Petrovic contributed four assists, including the second helper on Gawdin’s overtime goal. Pettersen recorded his first three-point game as a professional, scoring a power play goal early in the second period and setting up two other markers.
Winger Nathan Todd had a huge night for the Moose on Monday. He scored consecutive goals to tie the game at 3-3 in the second period and picked up the primary helper on CJ Suess’s late game-tying goal to send the game to overtime. Skating on Manitoba’s top line, Todd is in the midst of an impressive AHL breakout season at the age of 25.
Artyom Zagidulin picked up the win for Stockton in the last game, making 34 saves compared to 25 for Moose goaltender Mikhail Berdin.

Stockton — Martin Pospisil. The Slovakian forward tipped two goals past Berdin on Monday and now sits alone in fourth place on Stockton’s scoring leaderboard with eight points (four goals, four assists) in eight games. This season has already represented a big step forward for Pospisil, who recorded 10 points (three goals, seven assists) in 26 games last season. He has skated on a relatively consistent line with Emilio Pettersen and Dmitry Zavgorodniy, the latter of whom is still looking for his first AHL point. Pospisil has been a fixture on the top power play unit for the Heat and already has two goals on the man-advantage this season.
Manitoba — Jeff Malott. The 24-year-old winger spent the last four seasons at Cornell University, recording six goals every year before turning professional and signing an AHL deal with the Moose in advance of the 2020-21 campaign. Malott already has six goals in the first 11 games of his AHL debut season, having found a niche on Manitoba’s top line with David Gustafsson and Nathan Todd. He has three goals and four points in his last two outings.

This game will be broadcast on AHLTV.com (subscription required), with the opening puck-drop set to happen at 5:00 p.m. MT. Live game updates can be found on Twitter at @miketgould and @theheatbeat, or online at TheAHL.com.
Uncategorized
Recent articles from Mike Gould