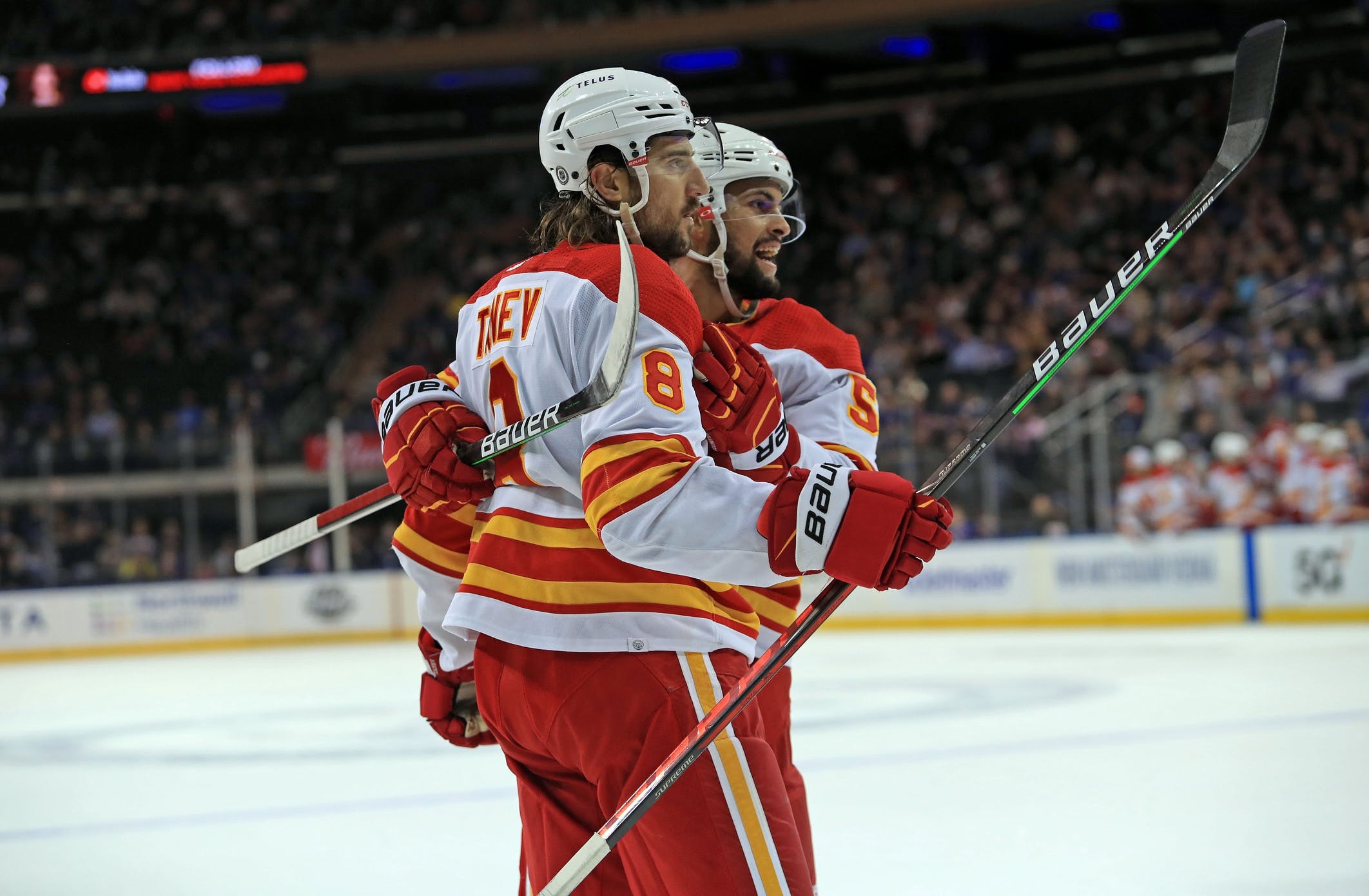 By Ryan Pike
9 months ago
At the 2021 expansion draft, the Calgary Flames lost their best defender to the Seattle Kraken. Mark Giordano, the club’s captain and a former Norris Trophy winner, was left exposed and was claimed by the National Hockey League’s 32nd franchise.
At the time, it was mentioned that the Flames couldn’t just “replace” Giordano. No one player ended up taking his role, but through 47 games it appears that the club has managed to replace him in the aggregate.
In the last 30 games of 2020-21, Darryl Sutter coached the Flames. In the back half of that season, the club used basically seven blueliners in six spots:
Obviously, this season’s defensive group is much different. Giordano is gone to Seattle and Nesterov went back to Russia. Stone has primarily been in the press box and Valimaki has spent most of his season in the AHL. Added to the defensive group this season were Oliver Kylington, Erik Gudbranson and Nikita Zadorov.

Last season, the Flames had a pretty clear subordination of pairings at five-on-five.
When the going got tough, the Flames leaned heavily on their top two pairings because it seemed like they couldn’t really rely too much on the other pairing.
The big difference with the pairings now compared to last season is the time on ice balance at five-on-five.
Kylington/Tanev play about 16:40 per game and Hanifin/Andersson clock in at about 16:35. Their deployments are pretty much even, meaning that the coaching staff is focusing more on tactical matching rather than trying to give either pairing specific zone starts. Zadorov/Gudbranson are skewed markedly towards offensive zone starts, but they’re also playing about 15:00 per game (over a minute more than their predecessors).
Tanev and Hanifin are both playing a full minute less per game at five-on-five and Andersson is playing about the same as when Giordano was a Flame. Kylington is brand-new and playing a legitimate top four role while essentially taking on Giordano’s five-on-five minutes, while the new third pairing is eating up over a minute more than they did last season.

On the power play, the Flames were using Andersson as the point man on the top unit (four forwards plus Andersson) and Giordano as the point man on the second unit (four forwards plus Giordano). Andersson has maintained his role, but Hanifin and Kylington have made the second unit a more traditional three forwards, two defenders grouping. The coaching staff have also opted to often put out regular five-on-five pairings late in power plays, which has reduced the wear and tear on the three PP blueliners.
Giordano was a top unit penalty killer, paired with Tanev. Usually the other pairing featured Valimaki and Stone or Nesterov, essentially the usual third pairing. Because the third pairing was limited, the “usual” scenario saw Giordano and Tanev stay out for the first two forward rotations – the Flames deploy their penalty kill forwards in three pairs – while the bottom pair only came on at the tail end of the PK. It led to a lot of PK time for Giordano and Tanev per game.
Now, Tanev is paired with Gudbranson and playing 10-20 seconds less per game on the PK, which adds up. Hanifin and Andersson are the other PK pairing, usually coming on earlier than before – typically with the second forward pairing – and it’s made the PK more balanced and less taxing on key players.

Giordano played nearly 23 minutes per night for the Flames. He was very much replaced in the aggregate:
When you have a Mark Giordano, you use the heck out of your Mark Giordano. When you don’t have one, you need to figure out a way for the whole defensive group to be more balanced. And that’s what the Flames have done: they have a more balanced, versatile defensive group now than when they had Giordano in their lineup.