Maple Leafs 4, Flames 2: Teams in the mirror are closer than they appear 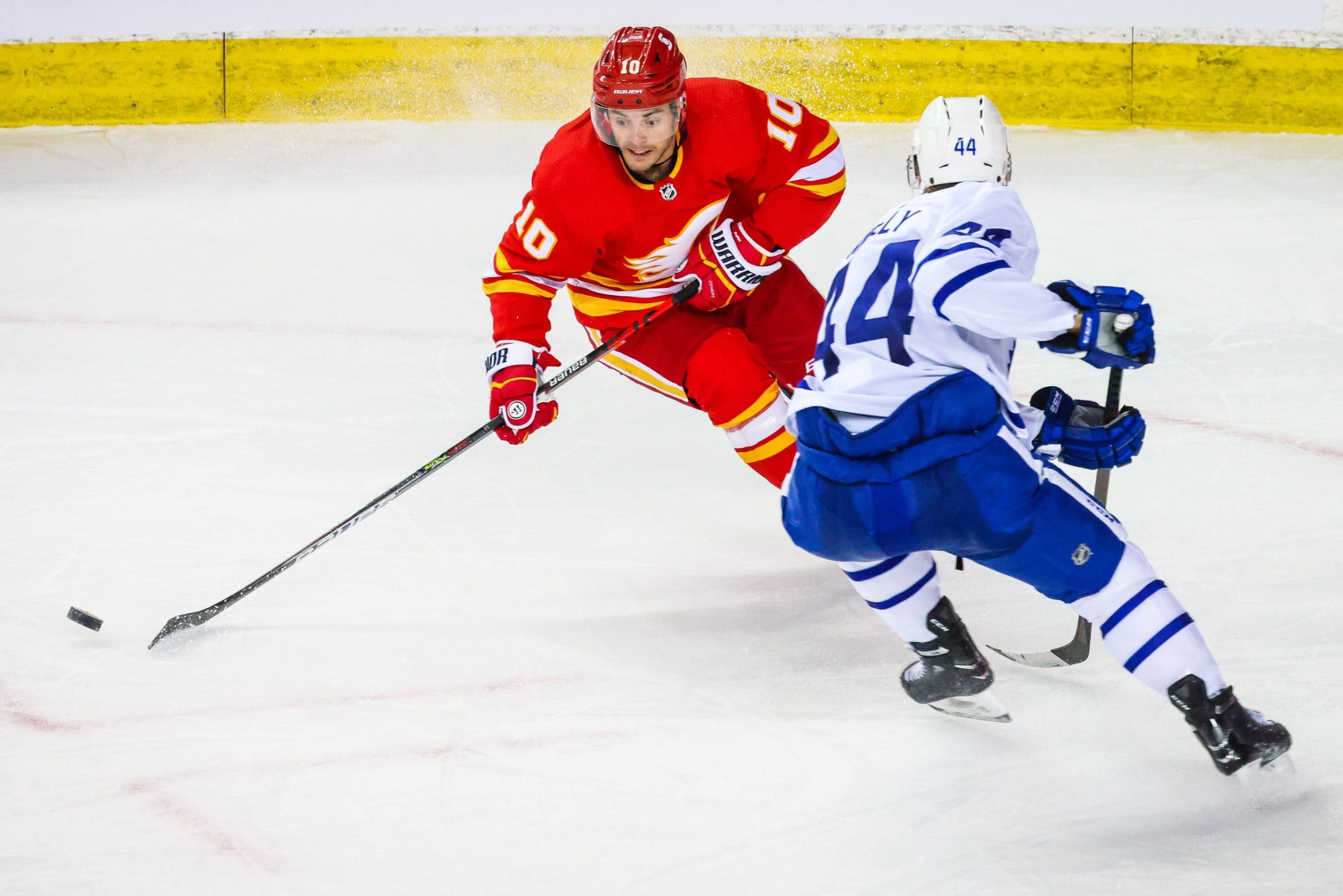 By Mike Gould
1 year ago
The 2020–21 Calgary Flames are not very good. They lost 4-2 on Sunday at the hands of the playoff-bound Toronto Maple Leafs, further cementing their position in the NHL’s cellar.
After going a league-worst 2-8-0 in their last ten games, the Flames sit just five points ahead of Ottawa Senators in the North Division standings. Calgary possesses a bottom-10 goals differential (minus-19) and only three Western Conference teams have won fewer games.
If the NHL were to end its season today—which would probably be sensible, given the reality of the Vancouver Canucks’ horrifying COVID-19 situation—the Flames would finish 26th in the NHL with just 35 points in 39 games. With another Flames loss (and a New Jersey Devils win), Calgary would fall into the bottom five in the entire league.
On St. Patrick’s Day, TSN’s Frank Seravalli referred to the Flames as “soft buyers” in advance of the April 12 trade deadline. On Sunday’s Flames telecast, Sportsnet’s Eric Francis cast doubt on whether the Flames need to be “sellers” this season.
The Flames’ future is difficult to assess. Even still, with the team nowhere near the playoffs, it’s clear that most of Calgary’s pending unrestricted free agents would be better served playing on a team with higher aspirations.
The Flames have Derek Ryan, Josh Leivo, Joakim Nordstrom, and David Rittich to offer to teams looking to stock up in advance of the post-season. After spending numerous draft picks at previous deadlines to acquire depth pieces, it’s time for the Flames to do a 180-degree turn and start recouping some of those losses.
Rittich’s situation is particularly interesting. The 28-year-old goaltender has been a good soldier over the years in Calgary but has yet to emerge as the bonafide starter some hoped he would become. Will his .904 save percentage this year be enough to earn him a raise from some other team?
Even if Calgary moves Rittich at the deadline, could they circle back on him with a new deal in the off-season? It might be worth consideration. Either way, Calgary should explore moving Rittich before the deadline to one of the many teams in search of another competent option in net.
As for the likes of Nikita Nesterov, Michael Stone, and Brett Ritchie: If they can be traded, they should be. It is particularly heinous that Juuso Valimaki has now thrice been a scratch behind the likes of Nesterov and Stone.
After missing nearly two full years of developmental time, it simply seems wasteful to not let a healthy Valimaki play and develop through his ups and downs. He’s had plenty of time to observe.
What will become of Sam Bennett? The playoff success of the Flames’ number 93 is well-known, as is his perennial underachievement in the regular season.
Calgary’s highest-ever draft pick, Bennett’s trade value is set to plummet in the off-season as he becomes a restricted free agent with a $2.55 million qualifying offer. Worse, still, Bennett will be eligible for salary arbitration for the first time in his career.
Bennett reportedly requested a trade earlier this season. His qualifying offer is off-putting, to say the least. In all likelihood, Bennett is a rental who will not be tendered his expensive QO in the summer. (Calgary probably can’t afford to pay him, either way). In that case, the Flames should probably look at trading Bennett to a team eager to pay for “playoff performers.”
It’s time for the Flames to embrace a youth movement. Under general manager Brad Treliving, they’ve made some good draft picks but have stepped up to the podium very infrequently (particularly in the first round).
Only Pittsburgh and Tampa Bay have made fewer first-round draft picks than Treliving’s Flames. Those two teams have combined for three out of the last five Stanley Cups. The Flames have won three playoff games since Pittsburgh won in 2016.
Suffice to say, Pittsburgh and Tampa Bay have earned the right to spend picks. The Penguins have Sidney Crosby and Evgeni Malkin to build around. Tampa has Steven Stamkos, Victor Hedman, and Nikita Kucherov. Despite missing the playoffs 50% of the time since 2013-14, Calgary has spent draft capital like a team in the midst of a dynasty.
Calgary is currently ahead of only New Jersey, Buffalo, Ottawa, Anaheim, and Detroit in the league-wide standings. Those five teams have combined to make 44 first round picks over the last seven drafts. That’s equivalent to 8.8, each. Calgary has made five first round selections: Sam Bennett, Matthew Tkachuk, Juuso Valimaki, Jakob Pelletier, and Connor Zary.
More concerning, still: the Flames have made just one second round pick in the last four years. That was the recently-signed Yan Kuznetsov, selected 50th overall in 2020. In 2019, 2018, and 2017, the Flames did not make a single second round pick; from 2015 to 2018, they made just one pick in the third round (Adam Fox, in 2016).
In short: if you think trading Sam Bennett or David Rittich for a couple of third-round picks isn’t worth it, you might want to reconsider. It’s time for the Flames to start assembling a crop of young talent through the draft. Their scouts are clearly capable of identifying good players in any round—just look at Fox, Andrew Mangiapane, Dillon Dube, and Johnny Gaudreau as examples—but they need to put more bullets in the chamber.
Sunday’s performance against the Leafs changed very little for the Flames in the grand scheme of things. It further solidified their position near the bottom of the league and made it even clearer that selling is the only viable path forward for the Flames.
At this point, the question isn’t about who goes. It should be, “who stays?”
Uncategorized
Recent articles from Mike Gould