Maple Leafs 5, Flames 3: Who are the cornerstones?

By Mike Gould
1 year ago
In case you missed it, the Calgary Flames lost again.
The Toronto Maple Leafs defeated them by a 5-3 score on Monday night, driving another nail into the proverbial coffin in which the Flames’ 2020-21 season now resides.
Monday’s game was, in many respects, fine. The Flames managed to score three goals, including one shorthanded, for just the fourth time in 14 games under head coach Darryl Sutter. It was the first time Calgary had reached that scoring output since Mar. 19.
Then, there were the negatives. Jacob Markstrom allowed five goals on 30 shots. After a good first period, the Flames lost the expected goals battle in the second and third and ultimately got outscored 2-1 at even strength in both frames.
The Flames entered the third period down 2-1. Mikael Backlund tied the game at 2-2 at the 4:17 mark; Wayne Simmonds restored the Leafs’ one-goal lead less than three minutes later. Backlund knotted it up again at 10:05; by the time the clock hit 12:10, the Leafs had scored two more goals and possessed the 5-3 lead they’d carry to the final buzzer.
Not great. With the loss, the Flames fell below the New Jersey Devils in the league-wide standings and now own the NHL’s fifth-worst record.
As a result of the Seattle Kraken joining the league (and automatically receiving the third-best lottery odds), the Flames would have the sixth-highest chance at earning the first overall selection in the 2021 Draft if the season were to conclude today.
One of the more interesting parts of Monday’s game actually occurred during the second intermission, when Sportsnet panellists Ryan Leslie, Eric Francis, and Matt Stajan discussed the Flames’ “cornerstones” (read: untouchables) in a potential retool or rebuild.
Francis presented the following list of eight players from the Flames’ current roster. 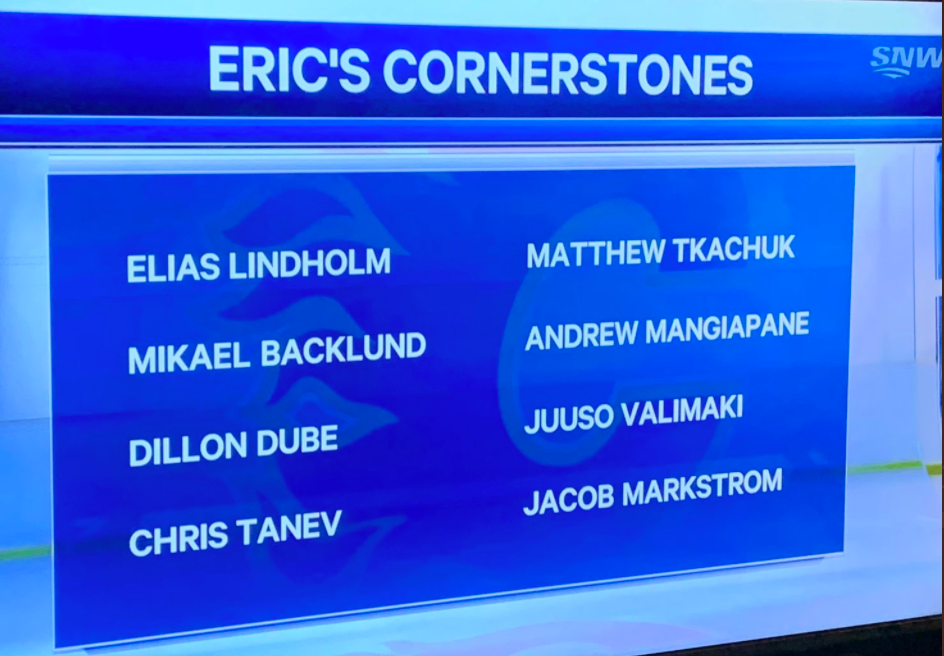 Photo provided by Nate Thomas. Graphic by Sportsnet.
First and foremost, let’s tackle the obvious: This list doesn’t include Johnny Gaudreau or Sean Monahan. Given these players’ respective contract situations, this probably makes sense. Gaudreau has just one year remaining after this one on his deal; Monahan has two.
Those two players were undeniably the cornerstone of Calgary’s previous attempt at a major directional change. Now, with Monahan appearing to have regressed and Gaudreau nearing unrestricted free agency, neither player should be off the table in any potential trade.
However, what are Mikael Backlund and Chris Tanev doing on that list over the likes of Noah Hanifin and Rasmus Andersson? Backlund just turned 32, is on an expensive contract for three more years, and has seen his defensive results begin to regress over the last three years.
According to Evolving-Hockey, Backlund’s defensive play at even strength since the 2016-17 season has been worth 3.6 goals below replacement level. He has remained a proficient offensive play-driver in those years but looks to have taken a big step back this season, in that regard. At his age, Backlund has likely already given the Flames his best years and likely won’t be around by the time the team is ready to return to contention.
Tanev, meanwhile, has been fantastic in Calgary following a subpar 2019-20 campaign with the Vancouver Canucks. The 31-year-old rearguard has long ranked among the league’s top defensive play-drivers but took a step back last year, with his even-strength defense being worth 0.2 goals below replacement over 69 games.
This season, Tanev has rebounded in spectacular fashion. He’s contributed 6.2 defensive goals above replacement with his play at even strength, leading the NHL by a mile in that category. His shorthanded defense has also been elite and his $4.5 million cap hit is suddenly looking like an incredible bargain.
But, again, Tanev is over 30 and his value will likely never be higher than it is right now. He’s signed for the next three years after this one and will be 34, soon to be 35, when his contract expires. Once again, if the right offer comes along, the Flames would be smart to at least consider it.
Hanifin just turned 24 and is the second-youngest defenseman on the Flames’ roster, behind only Juuso Valimaki. He has posted the 13th-best even-strength defensive results in the NHL this year and is signed for the next three years.
Rasmus Andersson, also 24, is locked up for the next five campaigns and was on a very encouraging two-way trajectory before taking a step back this year. Both these defensemen should be considered much more valuable to the Flames’ future than Backlund or Tanev.
What about Markstrom? The 31-year-old goaltender has five more years remaining on his $6 million-AAV deal and has a no-movement clause. His .898 save percentage this year is disappointing, to say the least, but he’s also dealt with an injury and is toiling on one of the league’s worst teams. At this point, Markstrom’s value is likely at an all-time low and, given his track record, there’s a good chance he has more to give this Flames team in the coming years.
Going off the Flames’ current roster, what would your list of “cornerstones” look like? Would it feature eight players or some other number? Would Johnny Gaudreau or Sean Monahan make your lists? Sound off below.
Uncategorized
Recent articles from Mike Gould