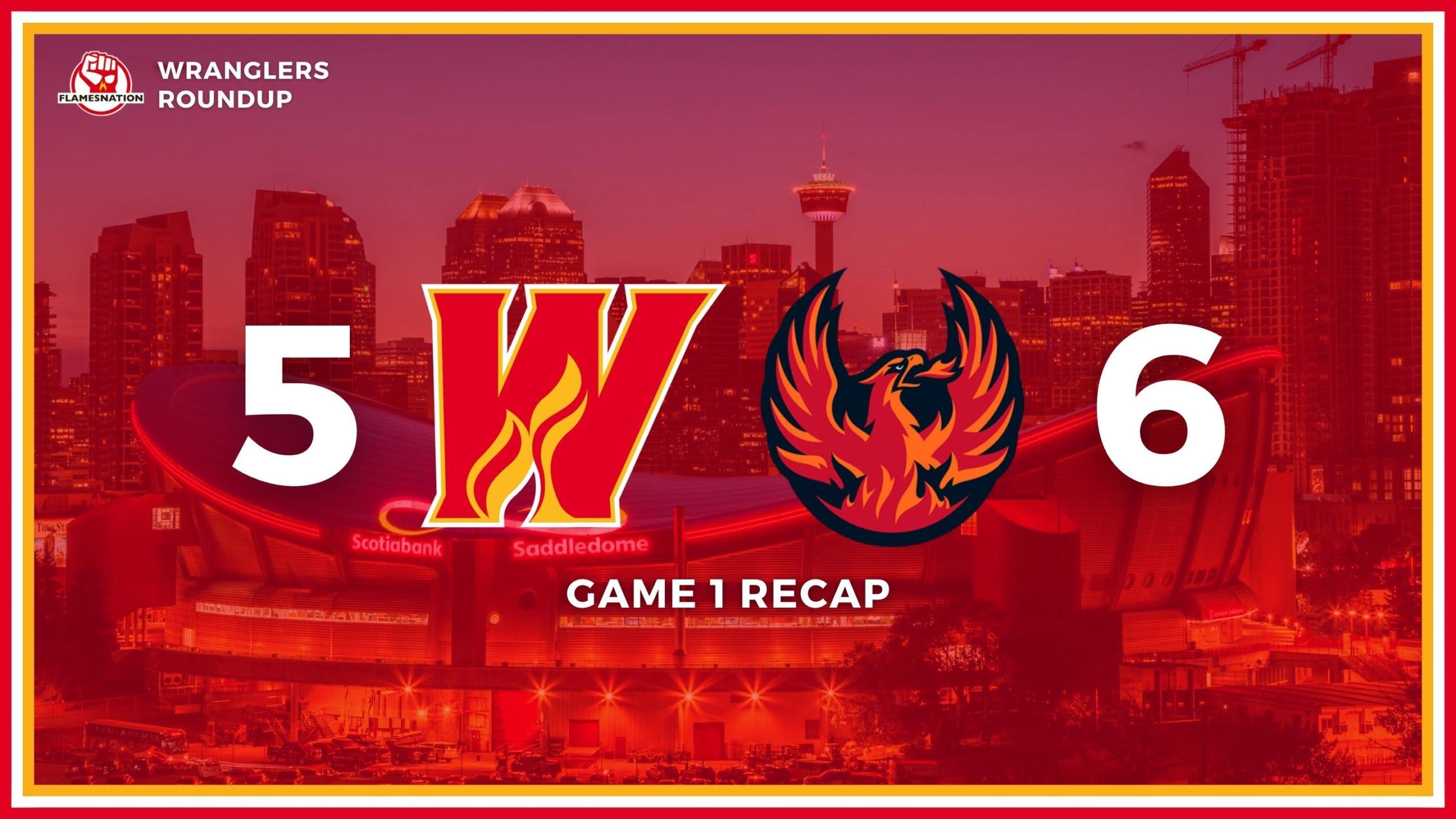 By Mike Gould
3 months ago
Sunday’s Calgary Wranglers game against the Coachella Valley Firebirds had a little bit of everything.
Tons of goals? Check. A thrilling comeback attempt? Double check. Some spectacular saves? You betcha.
Above all, the atmosphere was truly fantastic. With a reported 5,663 people in attendance at the Scotiabank Saddledome and “Happy Hour” prices in effect all game long, it was a raucous and truly memorable experience.
Kudos to the home team for limiting the spectators to the Saddledome’s lower bowl. Calgary Hitmen games sometimes take on a deserted vibe with fans scattered throughout the bottom two levels, but Saturday’s game couldn’t have been any more different.
The lower bowl was packed and, as a result, the event took on a very intimate feel.
“Great experience. Good hockey. Family friendly. Will be back,” one attendee wrote on Twitter.
“It was fun! Good atmosphere and reasonable prices. I’d definitely go again,” said another.
The Wranglers looked great in their brand-new uniforms. Plenty of fans at the Saddledome wore modern and vintage Wranglers merchandise, with new replica uniforms expected to be available for purchase in early November.
But how about the actual hockey? Let’s get into it.
Dustin Wolf is a superstar goaltender, and he looked the part for much of the first period against the Thunderbirds. He allowed just one goal on 14 shots and single-handedly kept the home squad within a goal even after Kole Lind opened the scoring at the 6:59 mark.
The 2021–22 AHL goaltender of the year made his best stop of the afternoon on Andrew Poturalski, the AHL’s reigning back-to-back scoring champion, who had a sure goal taken away by the teeny tender (with a little help from Dennis Gilbert).
But Wolf didn’t get much help from the guys in front of him and he started to struggle in the second period. The Firebirds scored four more times by the 10:31 mark of the middle frame, with Jesper Froden’s 5–1 goal spelling the end of Wolf’s afternoon.
It’s hard to blame Wolf for many of those Firebirds goals, and it wouldn’t be at all surprising to see Wranglers head coach Mitch Love go right back to the Gilroy, CA product for the rematch on Monday. Not too long ago, Wolf allowed five fluke goals on just 11 shots in his very first AHL game. He turned it around pretty quickly after that.
With Wolf still between the pipes, Jeremie Poirier scored the first-ever AHL Wranglers goal at the 7:03 mark of the second period. Cole Schwindt and Martin Pospisil picked up the helpers on the historic tally. (Poirier was fantastic in Sunday’s game).
The Wranglers went to work after Dansk relieved Wolf, scoring twice in quick succession to cut the Firebirds’ lead to 5–3 before the end of the second period.
First, veteran defenceman Nick DeSimone wired a wrister from up top past Firebirds starter Joey Daccord to make it a three-goal game with 2:21 to go in the middle frame; then, after drawing a penalty, Calgary’s own Matthew Phillips scored off a crafty backhander with just one-tenth of a second remaining.
Lind scored his second of the game to make it 6–3 Firebirds early in the third, but — even after a disallowed goal — the Wranglers remained on the attack.
Phillips scored his second power-play goal of the afternoon off a slick wraparound play to make it 6–4 with just 5:56 to go in the third period. Only 46 seconds later, Walker Duehr netted his first of the year off a long-range knuckler that completely fooled Daccord.
But the Wranglers were unable to muster as much as one shot on goal in the final four minutes of regulation, even with Dansk on the bench for the extra attacker. The Firebirds played excellent trap defence to keep it a one-goal game and they ultimately walked away with a hard-fought 6–5 win to spoil the party at the Saddledome.
Even so, it was wonderful to watch the Flames’ top prospects play in front of an energetic hometown crowd. Especially after the pandemic-shortened 2020–21 Stockton Heat season in which the only people in attendance were a couple credentialed media members and the rink staff, Sunday’s atmosphere was a breath of fresh air.
Bring on Monday’s rematch!

The Wranglers will return to action at the Saddledome for a rematch against Coachella Valley on Monday evening at 7:00 p.m. MT. Tickets are still available at calgarywranglers.com; you can also watch the game on AHL TV.
News
Recent articles from Mike Gould