By Mike Gould
8 months ago
Mitch Love will tell you that the Louis A.R. Pieri Memorial Award, given annually to the American Hockey League’s most outstanding head coach, is a team distinction.
Said team erupted on Wednesday afternoon after being informed that the first-year Stockton Heat bench boss was named the 2022 recipient of the award.
Both on and off the ice, the newly-minted AHL Coach of the Year was quick to give all the credit right back to his team. Stockton finished with an extremely impressive 45–16–7 record in the 2021–22 regular season.
“It’s all the hard work that you guys, this group right here, along with [the other coaches] that work each and every day for you, the support staff — that’s the award. That’s the regular-season award.” Love told his team at the end of Wednesday’s skate.
“Thank you very much, I appreciate it. But this is a team award,” Love continued. “And we all f****n’ know that it doesn’t mean diddly-squat unless we’re hoisting a trophy here in two months.”
Love touched on many of the same points while holding court with reporters during Wednesday’s media availability.
“This is a team and staff award,” Love told FlamesNation. “You can’t win hockey games without good players that put a lot of work in, and you can’t be a good team without good staff. That’s right from your equipment staff, your athletic staff, your strength and conditioning staff, to your coaching staff.
“The hours that we’ve put in here to have success and try to allow our players to be in a position of success for themselves in their progression through this league and our organization — that’s what today is all about,” Love continued. “It’s a recognition and an honour of a good regular season, and now it’s time to park that and get ready here for the best time of the year, which is the playoffs.”
Despite being a rookie head coach in the professional ranks, Love is very familiar with the ins and outs of the AHL. The 37-year-old Quesnel, BC product played parts of five seasons in the league from 2005 to 2010 — each with a different team. 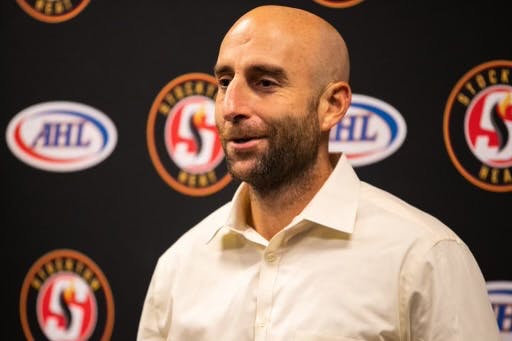 Stockton Heat head coach Mitch Love. Photo provided by Heat PR.
Love topped out at two goals and seven points in 59 games with the Lake Erie Monsters in 2007–08, although his 213 penalty minutes from that season stand out just a little bit more. The following year, he recorded one less assist … but made up for it by logging one additional penalty minute.
To put it mildly, Stockton’s head coach was a real scrapper in his playing days. You’d hardly know it seeing how well he connects with his team’s uber-skilled forwards.
“He’s been great for us this year,” said fourth-year pro Matthew Phillips, both Stockton’s shortest player (5’8″, 165 lbs.) and its leading scorer (68 points in 65 games). “He’s kind of a good mix of a player’s coach but also, he’s very firm and demands a lot out of us.”
“I think he’s had a good balance of teaching and showing us the way and showing us the systems and then also being able to push us when we need to be pushed,” agreed Connor Zary, the Calgary Flames’ 2020 first-round pick who thrived under Love’s tutelage down the stretch.
“Just because we win a game doesn’t mean we did things right, and just because we lost a game doesn’t mean we did everything wrong,” Zary continued. “I think there’s a lot of times where mistakes were fixed, and he kept pushing us to be better all year. We were never content with where we were, even when we were the top seed.”
Indeed, the Heat finished the season as the best team in the AHL Pacific Division and earned a bye to the second round of the 2022 Calder Cup Playoffs. Their first postseason opponent still has yet to be determined.
Love became the first head coach of the Flames’ AHL affiliate to win the Louis A.R. Pieri Memorial Award since Bill Stewart of the 1997–98 Saint John Flames.
In recent seasons, the Stockton organization has become as much a development system for coaching talent as it is a maturing environment for young players. Past Heat coaches Ryan Huska and Cail MacLean have both graduated to become assistants in Calgary and currently serve on Darryl Sutter’s staff.
Love is the third-youngest head coach in the AHL, older than only Neil Graham (Texas Stars) and Ryan Warsofsky (Chicago Wolves). Despite his relative youth, Love already has nearly a decade of coaching experience.
After serving as an assistant with the Western Hockey League’s Everett Silvertips from 2012 to 2018 (coaching @Dustin Wolf in his WHL rookie season), Love moved on to lead the Saskatoon Blades for three years before advancing to the AHL with the Heat.
Less than a year later, Love has his players ready to do battle in Stockton’s first playoff appearance since 2017.
“It’s been probably a little different, you would say, coming from junior to pro, but he’s done a great job adjusting,” Phillips said. “I think the fact we were able to bounce back from losses early in the season laid that standard, that foundation, to kind of follow suit for the rest of the season, and Mitch, along with our whole staff, has constantly pushed us.
“We haven’t really been satisfied, no matter where we’re at.”