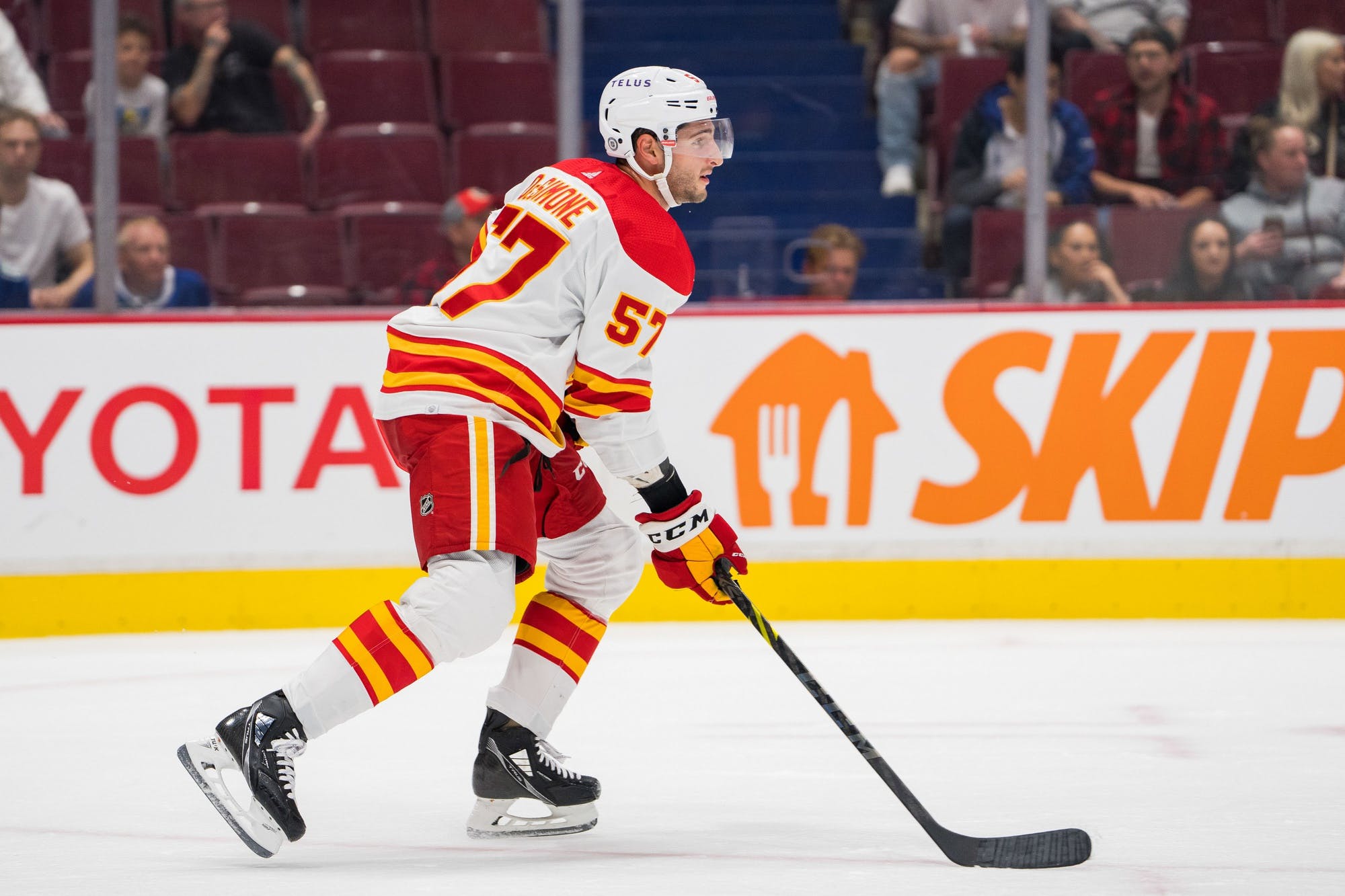 By Mike Gould
2 months ago
The Calgary Flames have made a series of roster moves as they prepare to hit the road for the next three games.
Defenceman Michael Stone left Saturday’s game against the New Jersey Devils in the first period and did not return. The Flames announced Sunday that Stone has been placed on injured reserve with an undisclosed injury.
In corresponding transactions, the Flames recalled defencemen Nick DeSimone and Dennis Gilbert from the Calgary Wranglers of the American Hockey League.
With both Stone and Chris Tanev currently injured, the Flames were set to depart for their road trip with just five healthy defencemen. They’ve rectified that situation for the time being.
The Flames are also currently without defenceman Oliver Kylington, who has yet to join the team this year while dealing with undisclosed family issues.
DeSimone, 27, has never played a National Hockey League game. He’s a 6’2″, 185-pound right-handed defender who has one goal and six points while typically quarterbacking a power play unit in eight games with the Wranglers this season.
Gilbert, 26, has appeared in 25 NHL games with the Chicago Blackhawks and Colorado Avalanche during his career. The 6’2″, 216-pound lefty does not have a point in eight AHL games with Calgary this year, although he’s primarily been used in a shutdown role (frequently on a pairing with DeSimone at five-on-five).
The Flames signed both DeSimone and Gilbert to two-year, two-way contracts this past summer. Gilbert joined the Flames from the Avalanche organization, while DeSimone previously spent the 2021–22 campaign with the Flames’ previous AHL affiliate club in Stockton, CA.
DeSimone scored four goals and 25 points in 68 games with the Stockton Heat during the 2021–22 AHL regular season. He added two goals and five points in 13 playoff contests as the Heat made it all the way to the 2022 AHL West Final.
Given Connor Mackey’s struggles against the New Jersey Devils on Saturday, the Flames’ projected defensive group heading into Monday’s game against the New York Islanders might look something like this:
MacKenzie Weegar – Nikita Zadorov
Noah Hanifin – Rasmus Andersson
Dennis Gilbert – Nick DeSimone
Connor Mackey
The Flames (5–4–1) will take on the Islanders (7–5–0) at UBS Arena on Monday evening at 5:00 p.m. MT.
News
Recent articles from Mike Gould