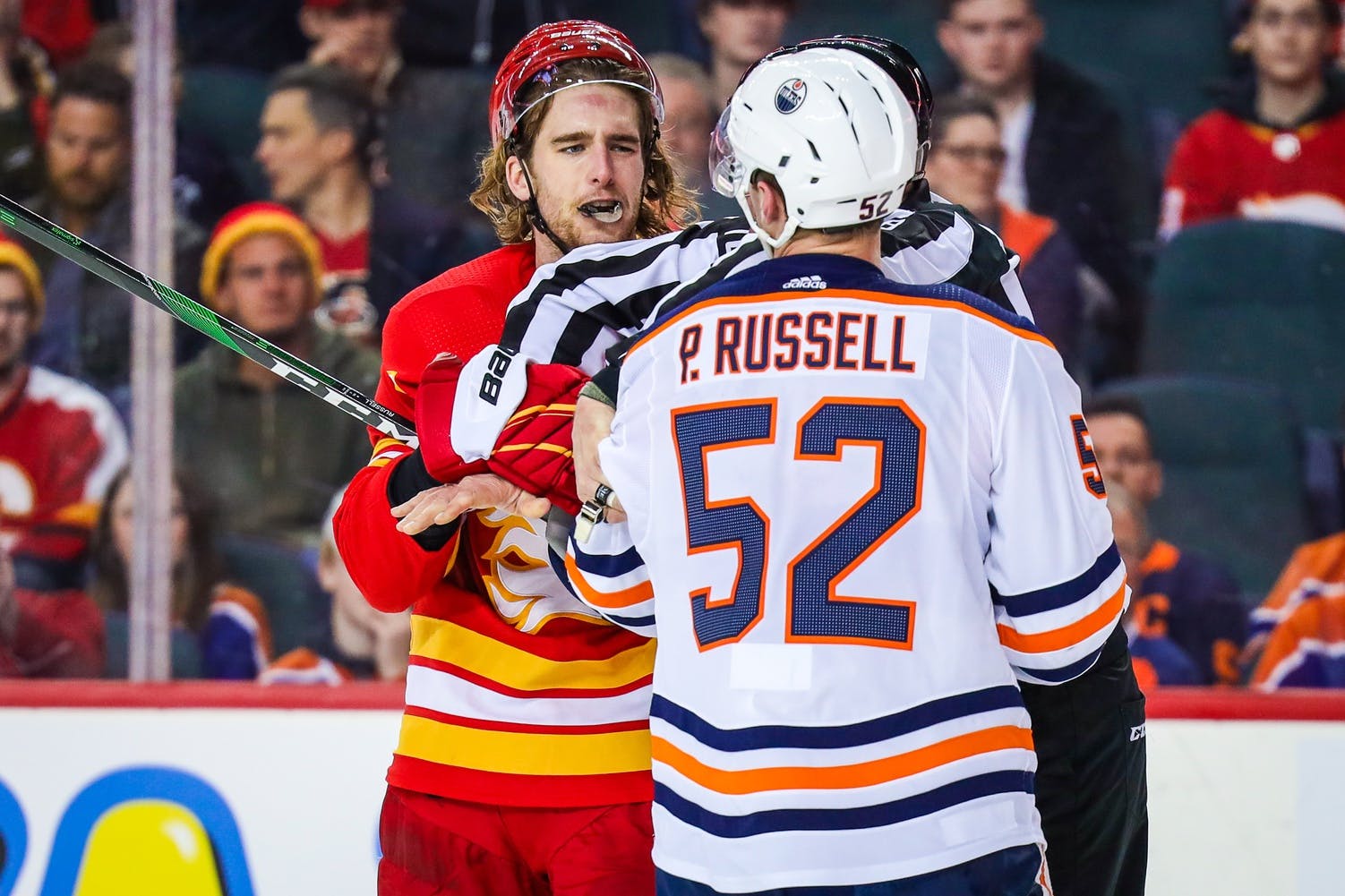 By Craig Petter
1 year ago
After 47 games of strong and steady play, only a scalpel could stifle Noah Hanifin’s best year to date in a Calgary Flames sweater.
The 24-year-old excelled alongside the gruff and gritty shutdown defenceman Chris Tanev, with whom he barricaded the blueline for most of the season. As a composed and reliable defensive presence, Tanev let Hanifin hone his breakouts, rushes and pinching by routinely hovering behind him as the last line of protection. The veteran kept them dependable, the youngster made them dynamic, and as a result the two fused into one of the most effective defensive pairings in the entire league.
Mentored and monitored by someone so tidy, Hanifin thus succeeded at dusting and mopping up the hazardous habits that occasionally stained his game in previous years. His gaps shrank. His giveaways slackened. His game matured.
And so even his thorniest, stubbornest critics must have sighed in chagrin when Hanifin slipped after a clumsy collision with Corey Perry and injured his shoulder in the last week of April. Lacking the chance to complete the first season that ever witnessed him even begin to bridge the canyon between top-four and top-two calibre defencemen in the NHL, Hanifin will skid onto the ice for his first game in the fall hungry to prove that his improvements this year were no fluke. After all, defencemen are notoriously late bloomers—so if Hanifin can build on this past robust season, he might flaunt himself worthy of flirting with first-pairing fame as he enters the latter half of his ‘20s.

Plucked by the Carolina Hurricanes at fifth overall in the 2015 NHL draft, Hanifin forewent a sophomore season at Boston College to plunge directly into hockey’s highest level as an 18-year-old. Coupled with his durability, the immediacy of his dive into the pros has actually made him the leader of his entire draft class in NHL games played with 436 contests notched (29 more than Connor McDavid, for the curious).
Hanifin played three seasons for the club that drafted him before hopping a boxcar and chugging northwest to Calgary alongside Elias Lindholm via trade in the summer of 2018. The Flames acquired both of those fifth overall selections in exchange for Micheal Ferland, Dougie Hamilton, and (Norris Trophy winner) Adam Fox.
Hanifin largely lined up alongside fellow Three-Syllable-Last-Name-Starting-With-H-Club member Travis Hamonic in his first two seasons with Calgary, the former witnessing him finish 48th in Lady Byng voting (no, seriously, peep his page on Hockey Reference) with only 12 PIM. When Hamonic withdrew from the 2020 bubble playoffs, Hanifin found himself flanking Rasmus Andersson on the blueline. The two were lethal together against the Winnipeg Jets—Hanifin led the Flames in even-strength CF% that series (according to archives on Natural Stat Trick)—but leaky against the Dallas Stars—Hanifin had the lowest CF% among all Flames defencemen that series (according to same). Luckily, by the opening puck drop of this past season in January, Hanifin had ironed out some of those inconsistencies.

It was this past year that Hanifin began to enact the transformation from scapegoat to stalwart on the defensive side of things. First, to address the eye-test elephant lurking and huffing in the room for as long as Hanifin has donned a Flames uniform—he posted the lowest rate of giveaways/60 of his career north of the border so far (according to Natural Stat Trick). So at the very least he fed the fewest handfuls of crumbs to his trolls, withheld some ammunition from those poised to take aim and fire at him on Twitter.
Thanks to the magic he conjured with Tanev, Hanifin also supplied some of the steadiest possession and expected-goals numbers of his first six seasons. He respectively notched the second-highest on-ice 5-on-5 CF% of his career (according to Natural Stat Trick) and the very highest xG% and percentage of high-danger chances for (HDCF%—only spelling it out because the author muddles the acronym sometimes) of his NHL tenure to date, too.
Notably, however, he was unspectacular by the offensive-zone components of those metrics. His on-ice CF/60 was the lowest since his rookie season, his xGF/60 was the lowest of his ongoing foray with the Flames and his HDCF/60 festered at the very bottom of his career outputs in that category. So, how does one manage to muster their best overall analytical season while offering their least effective offensive season by those very same metrics? Well, they dominate in the defensive end.
Tightened defence triggered Hanifin’s broader success this past season. He was a fizzing and flickering wick of dynamite alongside Chris Tanev. The duo topped all NHL defensive pairs who logged 400 minutes together or more with the lowest xGA/60, and they invariably finished somewhere among the league’s top four within those same parameters for CF% and xG% and HDCF% (all according to Natural Stat Trick, you guessed it!).
Not only did their tandem tower over most of the regular pairings in the league in these realms, but they were the most crucial chess pieces on the Flames’ board. The following graphic (courtesy of Moneypuck) compares the impact of every Flames defenceman’s presence and absence on the xG% fortunes of the team: 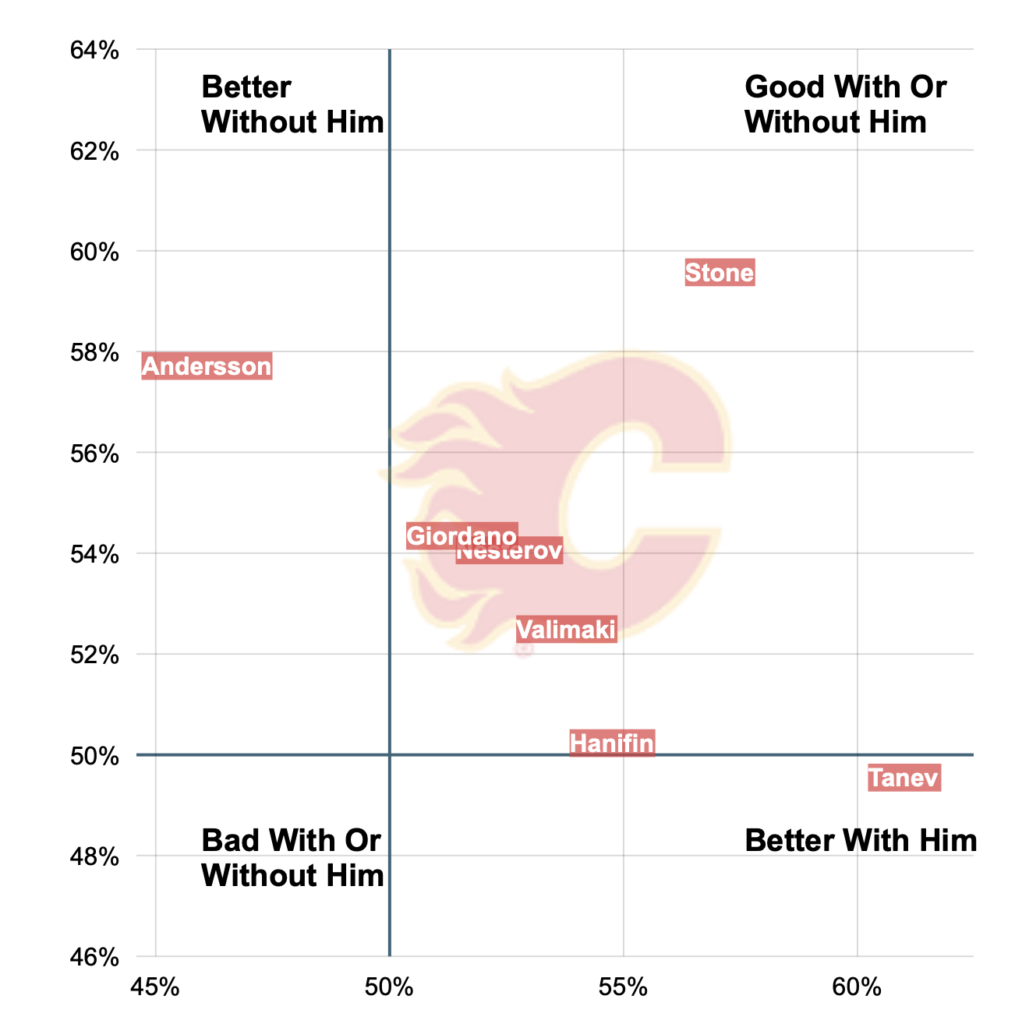 So, Tanev rules the roster. But Hanifin complements him as the next most positive pair of skates scraping the blueline, and as a 24-year-old trying to prune his game before wading into his prime, that’s about all one can request.
Offensively, Hanifin produced at an unremarkable but passable clip. He scored 4 goals and 15 points in 47 games, a pace that translates to 7 goals and 26 points in a full 82-game season. That output would have net him the second-highest goal and fourth-highest point totals of his career. It must be addressed, though, that his production spiked once the Flames replaced Geoff Ward with Darryl Sutter. While Ward was helming the bench for the first half of the season, Hanifin only managed to put up 3 assists; he failed to score a single goal. After they fired Ward, Hanifin scored 4 goals and 12 points in his remaining 23 games. So, under a coach who upped his power play usage and invigorated his scoring touch, Hanifin actually produced at a half-point-per-game rate that would obliterate his career highs if maintained for an entire season. And so he continues to climb.

Though his name once graced trade talks with teams like the New Jersey Devils and the Boston Bruins while the Flames shopped for wingers, it seems that Hanifin has colleagues closer to skipping town than he is. Hanifin is essentially a lock to be protected for the Seattle Kraken expansion draft. He has three years left on a $4.95 million AAV that causes nobody in Calgary any indigestion. And he is only 24 dang years old.
After a season hitched to one of the most reliable shutdown rearguards in hockey, it looks like Noah Hanifin is not only blossoming as a valuable defenceman, but it also appears likely he will do so in Calgary.