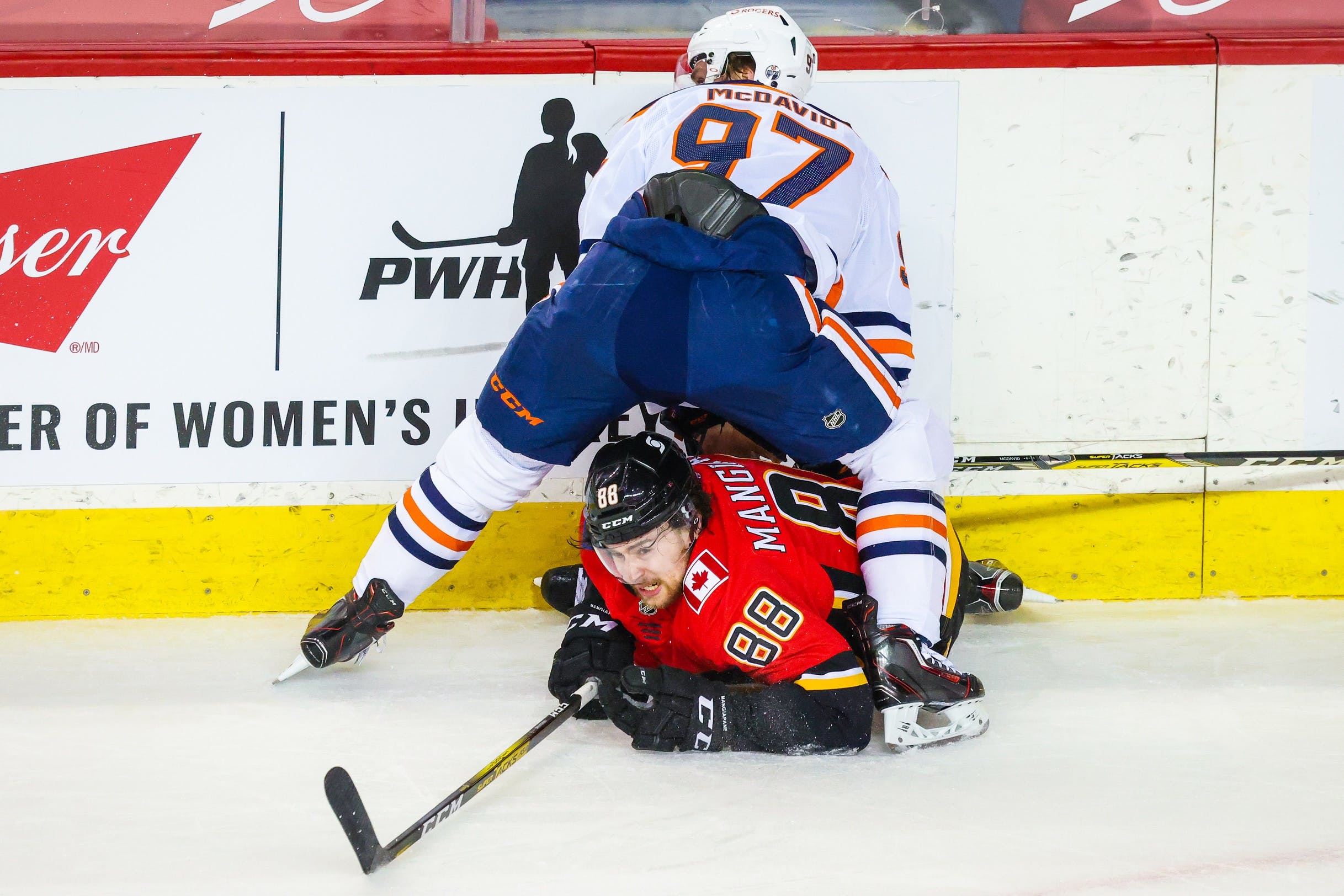 By Mike Gould
1 year ago
If you watched the Calgary Flames’ 2009 playoff series against the Chicago Blackhawks, you likely remember Nikolai Khabibulin being unbeatable and Martin Havlat dominating with three goals and six points in Chicago’s six-game victory.
By the time the sixth game of that series came along, the Flames looked frustrated beyond belief. Despite outshooting Chicago by a 44-16 margin in the deciding game, the Flames fell into a 3-0 hole in the second period and—trailing 3-1—ultimately pulled Miikka Kiprusoff with less than two minutes remaining in regulation time.
At that point, everybody knew it was over. Even the Flames did.
Still, at least the 2008-09 Flames made the playoffs. The 2020-21 edition of the Flames has been on the outside looking in for months, with Saturday’s 4-1 loss to the Edmonton Oilers pushing them a full eight points back of the Montreal Canadiens for the final North Division playoff spot.
The Flames have made marginal improvements since Darryl Sutter’s return as head coach in March. Even on Saturday, the Flames did a reasonably good job of pushing the pace in the second and third periods.
Even so, expected goals require finishing ability to consistently translate to actual goals. The 2020-21 Flames’ 52.76% 5v5 expected goals rate ranks ninth in the NHL; however, the Flames have been outscored 94-92 at even strength this season and 144-132, overall.
Only Los Angeles, Buffalo, Columbus, Vancouver, Detroit, and Anaheim have scored fewer goals than the Flames have this season. All five of those clubs rank below Calgary in the standings and, as a result, have better draft lottery odds.
If the season were to end today, the Flames would have the 11th-best chances of receiving the first pick in the 2021 NHL Entry Draft. They are one of only two active teams—the other being the brand-new Vegas Golden Knights—to have never selected in the top-three of a draft.
The Flames’ “tragic number” is now down to 2.5. When it hits zero, the Flames will be mathematically eliminated from playoff contention. With each Flames regulation loss and Canadiens win, the number drops by one. With each Flames or Canadiens loss in extra time, the number drops by 0.5.
Montreal plays again on May 3, 5, 6, 8, 10, and 12. As soon as the Habs win three of those games, Calgary is automatically eliminated. It doesn’t matter how well the Flames play, or even if they win every single one of their remaining games. If the Canadiens win three more times, the Flames are done.
If Calgary loses even one more game in any fashion, the Canadiens will only have to win two of their next six games to guarantee a long summer for the Flames.
The Flames’ odds are astronomical. Moneypuck currently gives them a 5% chance of making the playoffs this season. Even if Calgary won outright, the Canadiens could go 3-3-0 and still stroll into the postseason.
As Ryan Pike would say, the Flames need a time machine.
It seems unlikely Sutter will deviate from his existing lineup until the Flames’ aspirations are completely quashed. Even so, it might be prudent to start bringing more players up from the now-inactive Stockton Heat to give them a head-start on getting acclimated with the NHL club.
Which members of the Heat are the most likely to earn a call-up before the end of the season? Let’s take a quick look.
Matthew Phillips — Having just turned 23 last month, Phillips has played three full seasons at the AHL level and tied for the team scoring lead in 2020-21. The highly-skilled right wing is eligible to be selected by the Seattle Kraken in this summer’s expansion draft and it would sting for the Flames to lose him without getting a chance to see what he can do in the NHL. Perhaps keeping Phillips in the minors could shield him from Seattle GM Ron Francis’ view?
Adam Ruzicka — Unlike Phillips, Ruzicka is exempt from the expansion draft. He’s also pretty big (6’4″, 220 lbs.), meaning he could be slotted on the fourth line—if necessary—where a small, skilled guy like Phillips might not be as easily trusted. Ruzicka tied with Phillips for the Heat lead with 21 points this season, but the Slovak centre did it in two fewer games and scored three more goals. However, Ruzicka’s acceleration leaves a little to be desired and he has a tendency to disappear for stretches.
Luke Philp — Philp ranked third on the Heat this season with 17 points (eight goals, nine assists) in 30 games and earned plum deployments on both the power play and the penalty kill. The 25-year-old right-handed forward played both down the middle and on the wing and possesses a wicked shot. Since the start of the 2019-20 season, Philp leads all Heat players with 27 goals in 82 games.
Connor Mackey — Mackey is already on the Flames’ taxi squad and should be in line to earn some more NHL games before the end of the season. He played his first three professional games with the Flames in February before being demoted to the Heat in time for their opening game on Feb. 21. Mackey was a fixture on Stockton’s top pairing all season long, scoring 16 points in 27 games and ranking among the team’s leaders with a +4.68 relative even-strength goals-for percentage.
Artyom Zagidulin — “Zagi” played his first 28 NHL minutes in relief of David Rittich during the Flames’ 6-1 loss to the Ottawa Senators back on Feb. 25. He allowed two goals on 11 shots in his debut with Calgary. Like Mackey, Zagidulin is also on the Flames’ taxi squad and is a pending restricted free agent with arbitration rights. In six games with the Heat this season, Zagidulin posted a 3-3-0 record to accompany a .911 save percentage.
The Flames will return to action on May 5 for a 7:30 pm MT clash with the Winnipeg Jets. If the Flames lose that game and the Canadiens win both of their next two, Calgary will be eliminated from playoff contention.
Uncategorized
Recent articles from Mike Gould