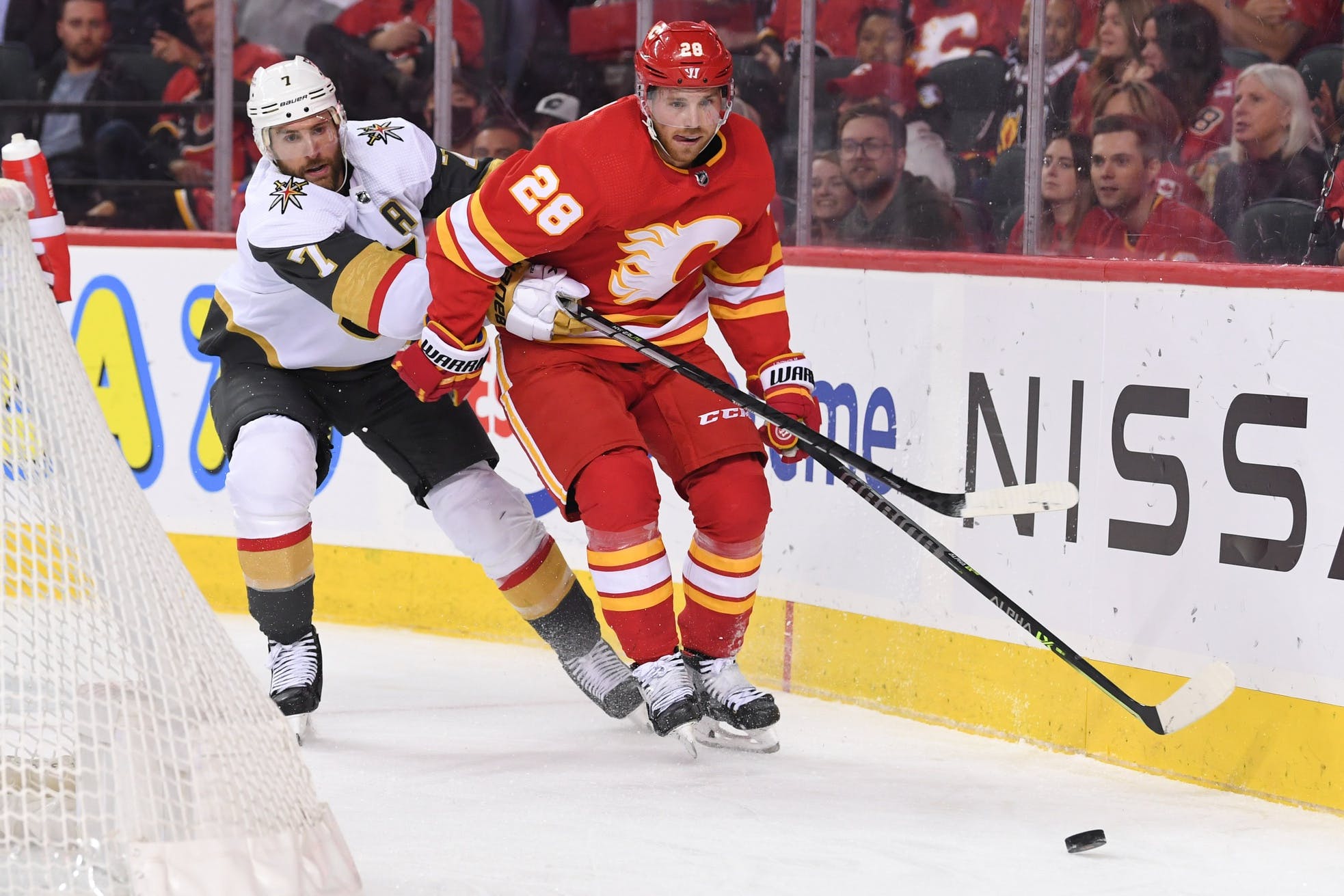 By Mike Gould
1 month ago
Happy Tuesday, everybody.
The Calgary Flames will play their sixth game of the 2022–23 regular season tonight when they host the Pittsburgh Penguins at the Scotiabank Saddledome.
Pike will have plenty of game day coverage for you in the coming hours, don’t you worry. But, until then, it’s time for something a little different:
The Pacific Power Rankings !!!!!!
We’re excited to debut this new feature this morning. With any luck, it might become a regular thing on this here site (as long as I can remember to do it).
A lot of our content is heavily based on stats. Shane doesn’t call himself “Flashalytics” for nothing (by the way, Shane, if you ever come up with your own analytics visualizations, you gotta call ’em Flash Cards).
Like the rest of our contributors, I always keep a close eye on various trends around the league. Nobody can watch all the games for every single team, but the numbers at least give you a significant piece of that picture.
But the numbers aren’t going to be the main focus of these power rankings. In case you couldn’t tell by the relatively casual nature of this lede section, I’m not approaching this assignment like it’s the LSAT (which I assume is hard — I have no idea).
We’re not going to be ignoring the stats. After all, wins and losses are just numbers in a table. But I’m not here to read off which teams have the best Corsi and expected goals percentages. You can find all that for free on Natural Stat Trick.
This is an opportunity for me to share the most interesting developments from the past week about each Pacific Division team — and, ultimately, how it relates to the Flames. Hopefully, this turns out to be interesting, somewhat educational, and fun.
Here goes.

Good lord, where to start!?
The 2022–23 Canucks are the hockey equivalent of ordering a coffee at Starbucks and being handed a dead cat. “Disappointing” isn’t a strong enough word. They’re a complete mess, and the blame for their awful start lies squarely at the feet of owner Francesco Aquilini.
Despite making the playoffs just twice since 2013, the Canucks have flat-out refused to embark on a legitimate rebuild. Fans want one. Much of the media wants one. Trevor Linden reportedly wanted one, which is partially why he’s not with the team anymore. But not the owner (or his team’s new management group).
The Canucks received that dead cat at Starbucks at the beginning of last season, too. They threw it at the ground (replaced Travis Green with Bruce Boudreau), watched it bounce (they finished the season on a huge winning streak, narrowly missing the playoffs and ruining their draft position), and ultimately decided to order another coffee. But this time, that cat is hitting the floor and sticking there.
Fans are already throwing jerseys onto the ice at Rogers Arena. Thatcher Demko is struggling. J.T. Miller is in the middle of the worst stretch of his career and is throwing out, er, eyebrow-raising quotes.
Only one team in the National Hockey League remains winless as we approach Halloween. That team is the 0–5–2 Vancouver Canucks.
They’re last on this list, and they’d still be last if we included the other three divisions.

First of all — just want to say a belated congratulations to Brandon Weiss, who was named the Sharks’ media relations coordinator this past summer after spending the previous few seasons doing PR for the Stockton Heat. Brandon is awesome and the Sharks are lucky to have him.
Unfortunately, I don’t think Brandon is going to watch his new team win many games this season. The 2–6–0 Sharks aren’t really in a contention window right now and I suspect GM Mike Grier is fully aware of that.
James Reimer has been fantastic to start the year, but Tomas Hertl and Timo Meier have combined for just one goal in eight games. Not great! Meier would make a lot of sense as a potential trade target for the Flames at some point down the line — we’ll take a closer look in the near future.
On the plus side, the Sharks’ new Reverse Retro jerseys are incredible. Full marks for that one.

There’s a chance the Ducks could be last on this list within a few weeks. They’ve been drastically outplayed through their first six games of the season, with only the Arizona Coyotes trailing them in NST’s expected goals percentage leaderboard. The Coyotes!
With all due respect to Clayton Keller, who is delightful, the Ducks are way more talented than the Coyotes on paper. But man, oh man, this team just cannot defend. On average, they’re giving up more than 40 shots per game. That’s next-level bad.
Poor Jamie Drysdale is still looking for his first point of the season, but he’s hardly been the problem on defence. Dmitri Kulikov has already been on the ice for 16 goals against in just six games, which — to borrow a phrase from a classic Leafs blog post — is what we call “economical suckage.” Kulikov is a solid defender most of the time, but … wow.
The good news: Troy Terry is excellent, Trevor Zegras will continue to be Trevor Zegras, and John Gibson should return a princely sum from the Buffalo Sabres leading up to the trade deadline. Otherwise, bleh.

Gabe Vilardi has finally arrived on the scene in Los Angeles. While Quinton Byfield, Arthur Kaliyev, and Alex Turcotte haven’t developed exactly as the Kings have hoped, Vilardi is off to a great start this season as a key weapon in all offensive situations.
The Kings are absolutely better than the Ducks. They’ll probably end up being better than the Seattle Kraken, too (more on them in a second). But for now, they look like your classic middle-of-the-road team with average forwards, average defencemen, and below-average goaltending. They certainly aren’t a lock to make the playoffs.
On another note: L.A.’s Reverse Retros are outstanding, but they really need to ditch the chrome helmets with their alternate uniforms. That’s one fad that really needs to go away. Awful, awful, awful. I can imagine them being pretty distracting on the ice, too.

I don’t want to spend too long on this section, mainly because I still think the Kraken are the most anonymous team in the National Hockey League. I’m not sure if it’s possible to have any kind of strong opinion about them.
It’s worth noting that the Kraken have actually been outplaying their opponents by a wide margin to start the season. But they’re sort of like the Western Conference equivalent of the New Jersey Devils. It doesn’t matter how many shots you take if your goaltender can’t make any saves.
Phillipp Grubauer and Martin Jones are sporting matching .860 save percentages through the first seven games of the season. As a reminder, Grubauer is in the second season of a six-year contract annually worth $5.9 million. How much longer will the Kraken keep giving him starts?
The Kraken have a ton of effective forwards (Matty Beniers, Jared McCann, and Andre Burakovsky the best of the bunch). But there’s no top defenceman on that team, nor is there one in the pipeline. And, frankly, their goaltending situation is a bit of a mess.

Jack Campbell’s Oilers career is off to an interesting start. He’s posted a .900 save percentage or better in four of his first five appearances, but his first Battle of Alberta outing was an absolute disaster. Four goals on 11 shots against!
Connor McDavid and Leon Draisaitl are scoring more than ever. But even with those two cheat codes in the lineup, the Oilers entered Monday’s action with a 2–3–0 record. They rallied to defeat the Pittsburgh Penguins last night to improve to .500, but they certainly haven’t looked like world-beaters.
Big miss by the NHL’s schedule-makers to pit the Oilers and Flames against each other only three times this season, with two of those meetings coming in October. The Flames already have the leg up in the season series and can clinch the win when they host the Oilers at the Saddledome on Saturday.
Maybe Twitter will verify the OilersNation account if Edmonton wins that game. Probably not, though.

The Knights won again on Monday, taking a 3–1 victory over the mercurial Toronto Maple Leafs at T-Mobile Arena as ex-Leaf Phil Kessel tied the NHL’s all-time “iron man” record.
Vegas missed the playoffs last season. Frankly, I’d be shocked if that happened this year. The Pacific really doesn’t look very strong — Seattle is fourth on this list — and Vegas is (mostly) healthy again.
Jack Eichel looks pretty good. Mark Stone, William Karlsson, and Reilly Smith are all back. And even with Robin Lehner on the shelf, the Logan Thompson/Adin Hill tandem has been nothing short of outstanding. Thompson, in particular, looks to be on the verge of becoming a legit NHL starter. It’s early, but he might get Calder Trophy votes if he keeps this up.
Of course, Vegas can’t be No. 1 on this list — it’s only been a week since they lost to the Flames while being badly outplayed in all situations. But, right now, they’re easily the Flames’ closest competition in the Pacific.

Beating Colorado, Edmonton, Vegas, and Carolina in the first five games of the season? Just Flames things.
Sure, they lost to the upstart Buffalo Sabres, but they still had a fighting chance in that one. More importantly, those Sabres look legit. Those fans deserve a good team and it looks like they’re finally getting one. Rasmus Dahlin might end up in the Norris conversation.
Back to Calgary. Nazem Kadri has been a revelation in his first five games as a Flame, producing at a strong clip and (more important) absolutely crushing it at both ends of the ice. Right now, he’s the Flames’ best player (and it isn’t close).
Jonathan Huberdeau is clearly very talented. So is Elias Lindholm, but, for whatever reason, he doesn’t look 100%. Those two are still chipping in offensively — almost exclusively on the power play — but their line with Tyler Toffoli hasn’t really clicked yet. When it does, hoo boy.
Jacob Markstrom looked like a $6 million goaltender for the first time this season in the Flames’ tense 3–2 win over the Hurricanes on Saturday. Good goalies help their teams find ways to win games they shouldn’t. It’s been a bit of a rough go at times for Markstrom to start the year but Saturday’s game was a step in the right direction.
Oh, and the Pedestal jersey rocks. Enough said.
Editorials
Recent articles from Mike Gould