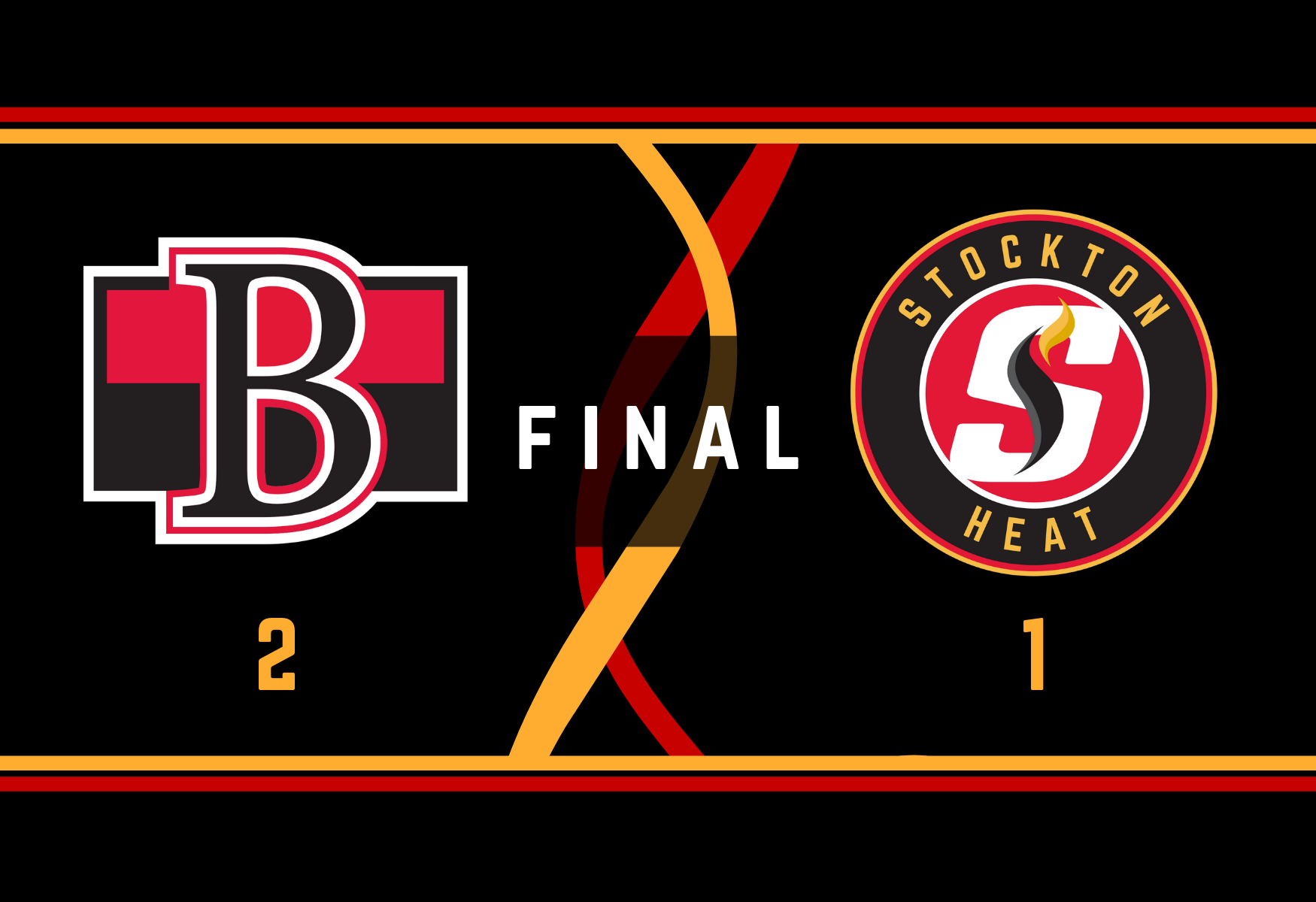 By Mike Gould
1 year ago
The Stockton Heat: not so hot right now.
The Calgary Flames’ temporarily-relocated farm team has followed up an impressive eight-game winning streak by losing six consecutive contests, most recently at the hands of the last-place Belleville Senators.
Luke Philp scored the lone goal for Stockton, which falls to 8-7-1 on the season. Logan Shaw and Vitaly Abramov answered back for Belleville, which improves to 5-9-1.
Garret Sparks made 32 saves for Stockton but allowed two goals late in the third period. B-Sens goaltender Marcus Hogberg allowed just one goal on 31 shots by the Heat.
Stockton and Belleville will battle once again tomorrow afternoon at 2:00 p.m. MT.

This game looked like a goaltenders’ duel from its opening moments. Sparks and Hogberg have been around the North American pro hockey circuit for a long time and both netminders showed confidence in the crease from the start of the first period.
One early save from Sparks allowed the Heat to quickly re-gain possession and draw the game’s first penalty.
Hogberg got his biggest test of the opening period with just over six minutes remaining. The Heat sped down the ice on a three-on-two rush, with the puck eventually finding its way to a trailing Connor Mackey in the slot.
The big defenseman sent a hard wrister towards Hogberg’s five-hole, but the Swedish goaltender managed to shut it down.
Belleville outshot Stockton by a 12-9 margin in the first period. The Heat got two good chances to close that gap (and get on the board) early in the middle frame, with Senators forwards Joseph LaBate and Cole Reinhardt being called on back-to-back infractions.
After failing to convert on either of those chances, Stockton started to see the tide of the play turn against them. Senators forward Vitaly Abramov had an excellent opportunity to solve Sparks after following up on a broken rush just shy of the 14-minute mark of the second period.
Heat forward Eetu Tuulola took a high-sticking penalty with 2:27 remaining in the middle stanza, but it was Stockton captain Byron Froese who had the best chance of the Belleville man-advantage.
After forcing a turnover by blue-chip defensive prospect Erik Brannstrom, Froese skated in against Hogberg on a partial breakaway. Brannstrom managed to recover and stop Froese temporarily but the wily veteran still managed to fire a shot towards the Belleville net.
The Heat finally broke the deadlock early in the first period. Just moments after Phillips hit the post with a wrister, Luke Philp tucked in a rebound of a Connor Mackey shot for his sixth goal of the season.
CJ Lerby picked up the second assist on Philp’s team-leading 25th goal since the start of the 2019-20 season.
Ultimately, Stockton sabotaged its chances at winning by getting into penalty trouble. Giorgio Estephan took a hooking infraction with 9:57 remaining in regulation time; just six seconds later, B-Sens captain Logan Shaw scored to tie the game at 1-1.
Philp did his best to restore his team’s one-goal lead just over two minutes after Shaw’s goal. He had two chances to beat Hogberg: the goaltender stopped Philp’s first opportunity, with the crossbar denying the second one.
Rookie AHL blueliner Greg Moro was called for interference with exactly four minutes to play in the third period. Belleville made him pay for his penalty, with Abramov taking an Erik Brannstrom pass behind Stockton’s defense and slipping the puck through Sparks’ five-hole.
Abramov’s third goal of the season gave Belleville a 2-1 lead with just 2:40 to play in regulation.
The Heat had no response, generating just one shot after Abramov’s go-ahead goal (Belleville, in comparison, managed two). Belleville took the win and outshot the Heat 34-31 in the game.

Stockton is ice-cold right now, but Luke Philp is red-hot. The 25-year-old AHL sophomore now ranks second on the team with 14 points in 16 games this season.
Despite the team’s recent losing ways, Philp has remained a consistent offensive presence for the Heat. He has points in 10 of his last 13 games, scoring 13 points in that span. During the current six-game losing streak, Philp has three goals and seven points.

The Heat will return to action at 2:00 p.m. MT tomorrow afternoon to close out this back-to-back series against Belleville. You can catch those games on AHL TV; I’ll be posting updates on Twitter at @miketgould.
Uncategorized
Recent articles from Mike Gould