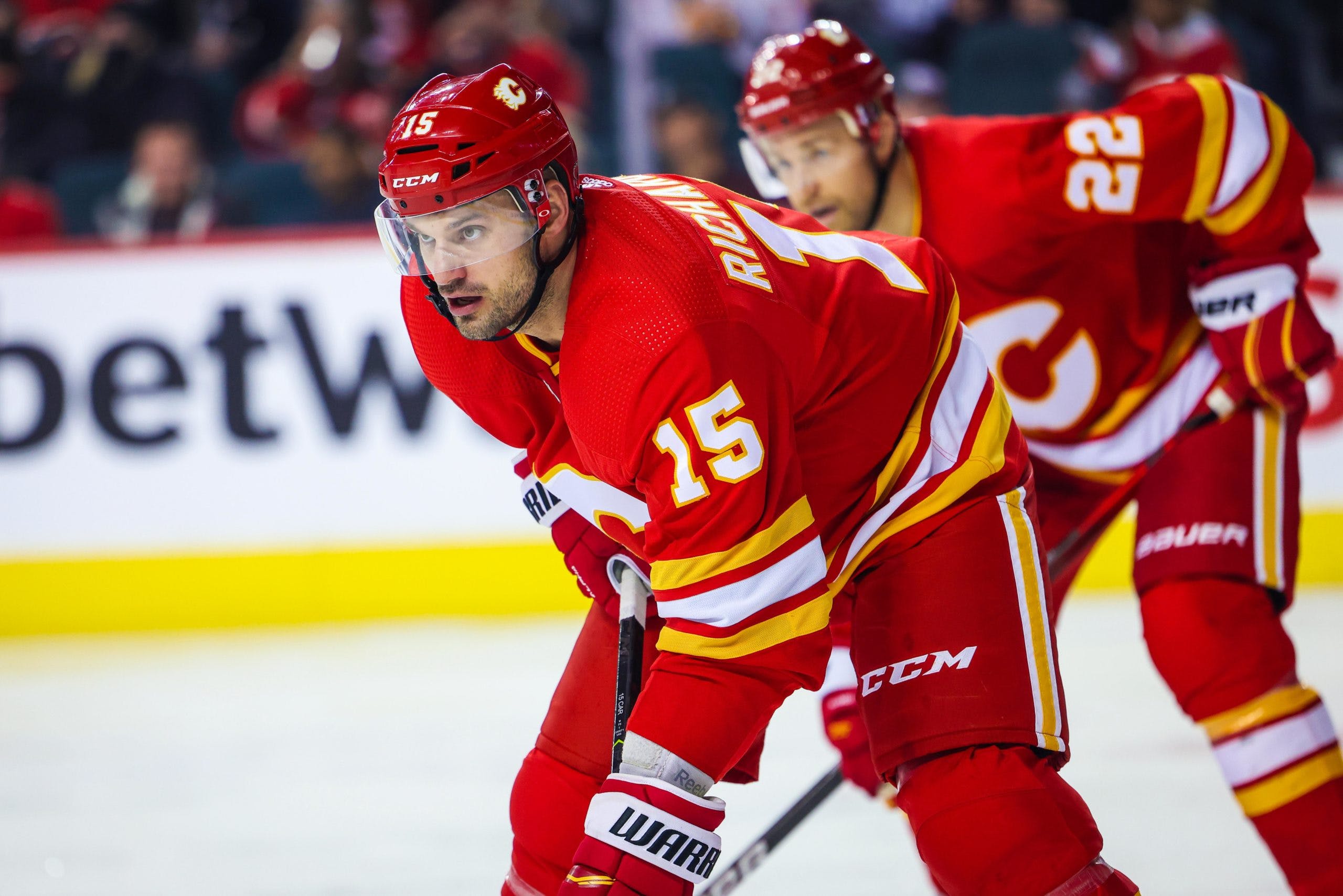 By Robert Munnich
3 months ago
We are inching closer to the start of hockey season. The Penticton Young Stars tournament begins on Sept. 16, with training camp following soon after that.
Between now and Penticton, the Calgary Flames are likely going to announce a few players being brought into training camp on a professional try-out, commonly known as a “PTO”. One of the missing parts of the Flames roster right now is an inexpensive, veteran 13th/14th forward, like what Brad Richardson and Brett Ritchie were for the team last season.
The Flames need this type of player because it would be less than ideal to have a young player like Adam Ruzicka, Cole Schwindt, or Matthew Phillips being healthy scratched when they should be playing big minutes for the AHL Wranglers. Having them as a 13th forward option could potentially stunt their growth and development as hockey players. A veteran forward is better suited for this role.
There are two ways the Flames could go about acquiring this type of player. First is a professional tryout (PTO). Or they could see who becomes available on the waiver wire around the league as teams cut down their rosters.
Let’s look at some PTO options for the Flames to fill that 13th forward role.
Here are some qualities the Flames will be looking for in a 13th forward:

Brian Boyle played some good hockey with the Pittsburgh Penguins in 2021-22. The 37-year-old centre scored 11 goals and 10 assists in only 66 games for the Pens last season, 10 of those goals coming at 5 on 5. Boyle is 6’6, and 245 pounds. He would add some size and physicality to the bottom of the Flames lineup. Boyle has played in 124 playoff games and brings a wealth of playoff experience and character to the Flames which is needed in a 13th forward role.
The only issue with Boyle is that he might be looking for a bigger role than being a 13th forward. He was a relatively productive bottom six player on a good team last season. He’ll have some good competition for ice time going up against Kevin Rooney, Trevor Lewis, and some young prospects.

Richardson played in 27 games for the Flames last season in this exact role the Flames are looking to fill. Richardson played well when he was inserted into the lineup by Darryl Sutter. On the ice he scored a couple of goals, won 58.82% of his draws, played on the PK, and was a physical presence. And off the ice he was a well-liked player in the organization, never complained about his role, and was a great teammate. Brad Richardson is everything you’re looking for in a 13th forward. He has a relationship with Darryl Sutter and Brad Treliving. You have to wonder if he’ll be a PTO option for the Flames come training camp.

Cody Eakin has had a drop off in offensive production over the last number of seasons. He is no longer the third line center putting up 30+ points like he did in his prime.  But he is still someone who can play NHL minutes in a limited role. Eakin could bring size and a veteran presence to the Flames. Eakin has played in 50 playoff games over the course of his career including a trip to the Stanley Cup Finals with the Vegas Golden Knights in 2018. Eakin can also play some penalty killing minutes if needed. He was second on the Sabres in penalty killing ice time among forward’s last season.

Riley Nash has struggled to find a consistent NHL home over the last few seasons. He has spent time in Columbus, Toronto, Winnipeg, Tampa Bay, and Arizona just two seasons. The offensive numbers are not pretty for Nash as he hasn’t scored a goal in his last 49 NHL games.
But Nash can still be an effective 13th forward on an NHL team. He can be relied upon for some defensive minutes and winning faceoffs.
If Nash were to be signed, it would likely be a two-way contract giving that team a little bit of roster flexibility. Nash could split time between the Flames and Wranglers and be a good mentor for some of the young pros in the AHL.