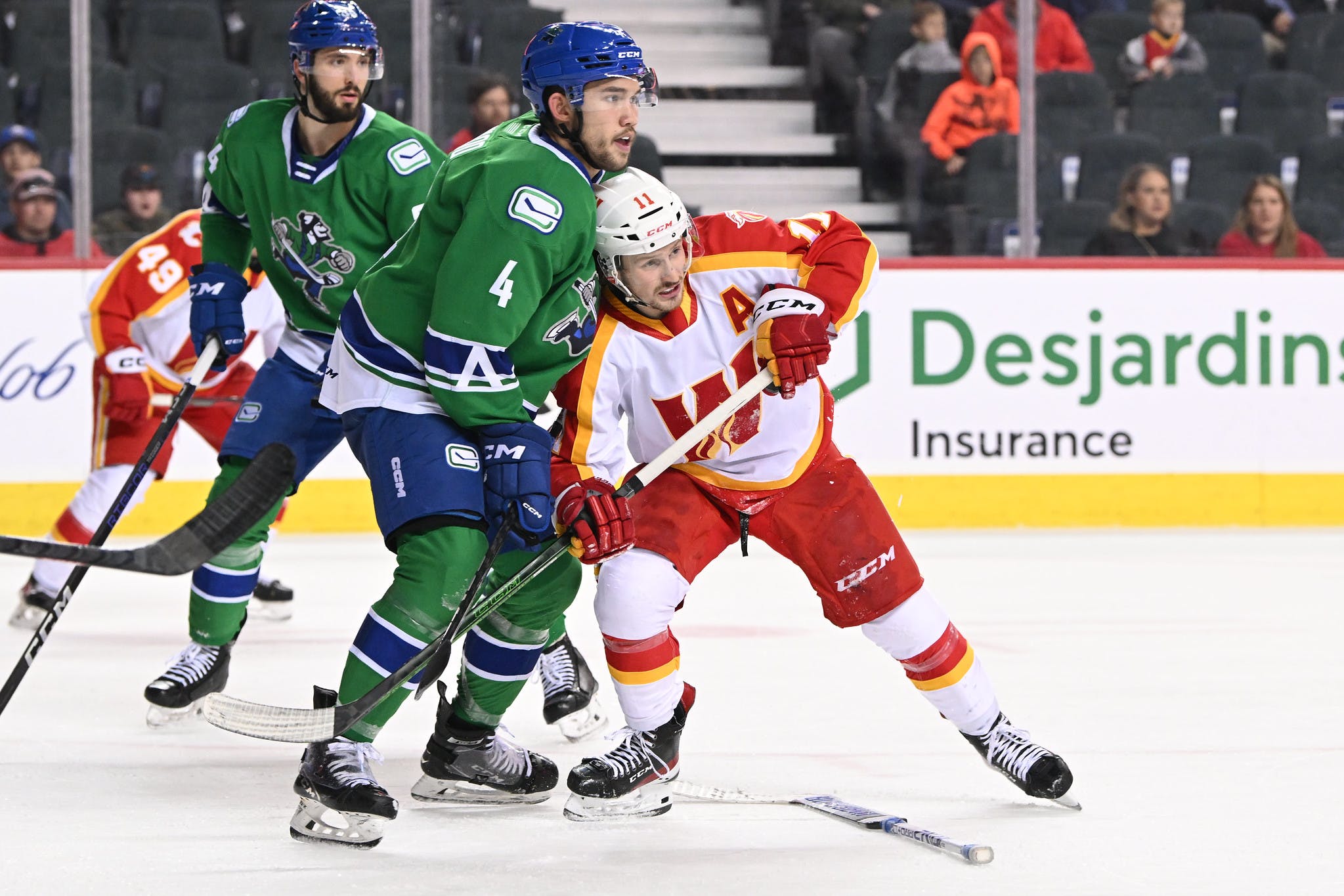 By Mike Gould
2 months ago
Calgary Flames prospect Matthew Phillips had another game to remember as the Calgary Wranglers steamrolled the Abbotsford Canucks by a 5–1 score on Friday afternoon.
Phillips scored twice and added an assist to bring his point total on the year to 23 in just 17 games, one point back of Tampa Bay Lightning prospect Alex Barré-Boulet for the league lead.
But while 20 of Barré-Boulet’s 24 points are assists, Phillips ranks atop the entire AHL with 13 goals this season. The 5’8″, 160-lb winger beat Canucks goaltender Collin Delia twice on four shots in Friday’s game and finished with a plus-three rating.
Walker Duehr also scored twice for Calgary, which improved to 10–6–1 on the season with the victory. Jakob Pelletier added the other Wranglers goal, converting off a slick feed from Phillips to make it a 4–1 hockey game midway through the third period.
Wranglers goaltender Oscar Dansk picked up his first win of the season, making 28 saves on 29 shots to improve to 1–3–1 with an .871 save percentage. The 6’3″ Swede made his first appearance since Nov. 13 with the Wranglers less than 24 hours removed from a dispiriting 4–3 loss to the Coachella Valley Firebirds.
By and large, Phillips and Duehr scored in similar fashions on Friday. Phillips netted his first of the afternoon by driving to the net and redirecting a long-range shot by Jeremie Poirier with his skate; Duehr picked up his second tally by banging home a rebound after a quality shorthanded chance for Ben Jones.
On the flip side of that coin, Phillips and Duehr scored their other goals on breakaways. They’re two of the Wranglers’ fastest players (and they’re both willing to go to the dirty areas to produce).
Even with Phillips and Duehr recording multi-goal games, 10 different Wranglers players found their way onto the score sheet on Friday. Pelletier extended his point-scoring streak to nine games with his goal in the third period.
Jones, Poirier, Connor Zary, Emilio Pettersen, Ilya Solovyov, Colton Poolman, and Josh Brook also picked up points in the win. Christian Wolanin scored the lone goal for Abbotsford late in the second period, with Justin Dowling and Will Lockwood assisting.
The Wranglers outshot the Canucks 39-29 and went a perfect 5-for-5 on the penalty kill. Their power play struggled, going 0-for-6, but they managed to score four even-strength goals and added another while down a man late in the game.
Now just two points back of the Colorado Eagles for the Pacific Division lead, the Wranglers will look to replicate Friday’s success when they return to action against Abbotsford at the Scotiabank Saddledome on Sunday evening.
News
Recent articles from Mike Gould