Recap: Wranglers get Wright to the point in 5-3 win against Firebirds 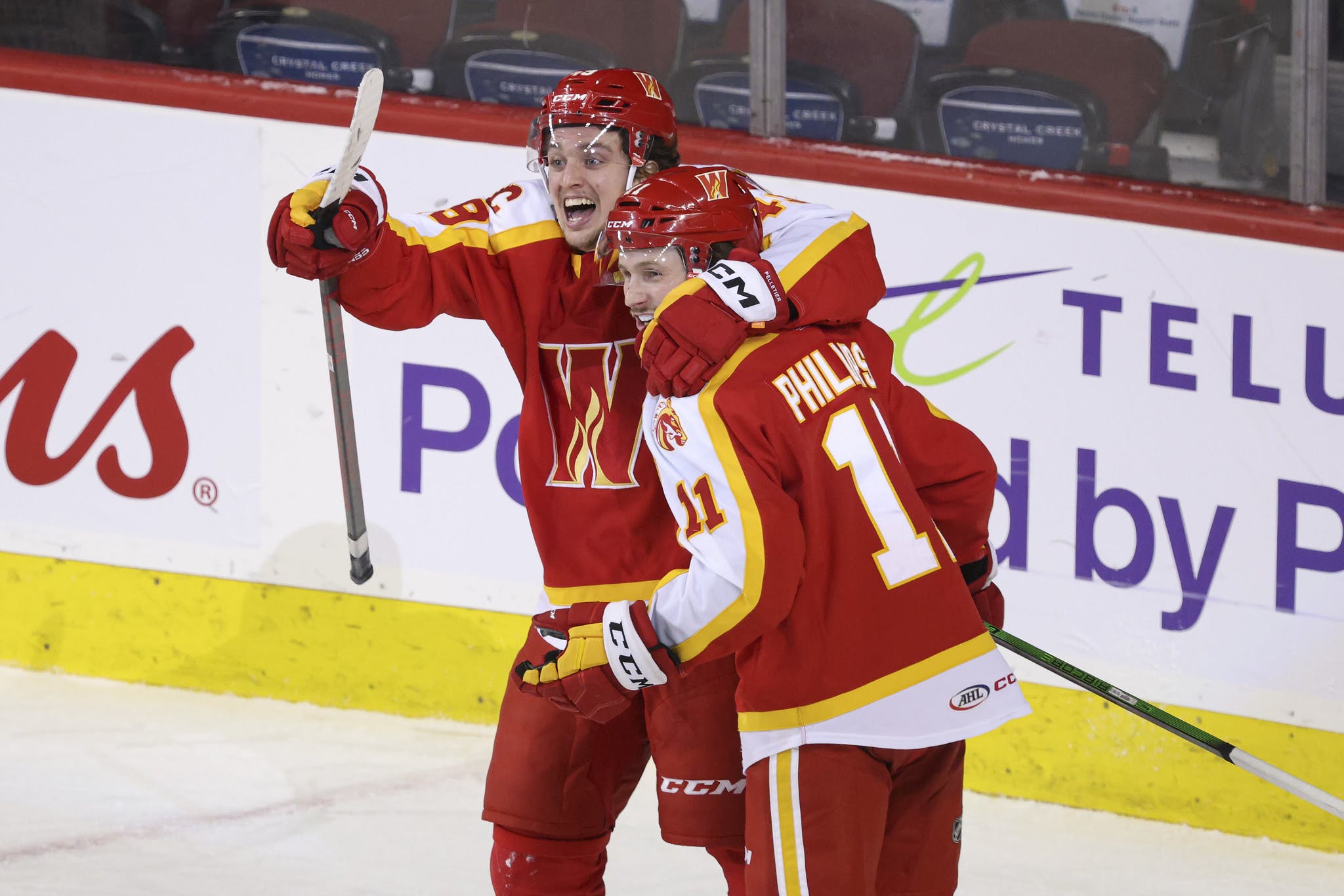 By Paige Siewert
2 months ago
The Calgary Wranglers hosted the Coachella Valley Firebirds on Tuesday in their return home from their four game road trip. This was their fifth game against each other this season already and the AHL debut for highly ranked Seattle Kraken prospect and 2022 first-round draft pick, Shane Wright. Wright was recently assigned to the Firebirds on a conditioning assignment of a maximum of five games or two weeks. This game was kept pretty close but it was ultimately the Wranglers who picked up a 5-3 win.

The Wranglers’ red jerseys made their debut at home Tuesday for their first of four games on the week. This jersey has hit the fan attic shelves and is their take on the Flames’ reverse retros.
The Wranglers drew first blood 4:39 into the period when Walker Duehr and Yan Kuznetsov set up Brett Sutter for his second goal of the season and the first since the season-opening weekend. Talk about playing the bounce.
There wasn’t any other scoring action through the first period but the second period brought an expected event quite early into the frame. That was Shane Wright’s first AHL goal. On his first shot nonetheless. Wright tied things up just 1:42 into the second.
The Wranglers didn’t take that one to hear and regained the lead shortly before hitting the midway mark of the second. Jakob Pelletier was the next scorer, answering back exactly 7:00 into the period with a feed from Matthew Phillips.
This extended Pelletier’s active point streak to seven games. The scoring continued just under a minute and a half later with a power play goal by the Firebirds and this game was evened up once again. Less than a minute later, Coachella Valley scored again and earned their first lead of the night.
Matthew Phillips didn’t let that one slide for long by scoring the equalizer 11:58 into the period for his 11th goal of the season and Pelletier’s 11th assist of the season. Coincidence? Not when they’re linemates.
This kept fans on their toes for the remainder of the period and down to the last five minutes of the third period. The Wranglers were tied at three looking for some revenge against the Firebirds among their struggles earlier in the season.
Yan Kuznetsov was the hero in this game scoring his first goal of the season at the perfect time. He would find the back of the net with 3:47 to go in regulation. He played his best game of the season by far with the game-winner and an additional two assists on top of that.
Among his positive feelings around getting that first on the season, Kuznetsov said post-game,

“We wanted to prove we weren’t the same team we were a month ago. So I think we did a good job.”

Cole Schwindt snuck one more goal in the last minute when the Firebirds pulled their goalie. The empty net goal made this game not seem as close as it was with the 5-3 final score. Dustin Wolf stopped 23/26 and the Wranglers put up a total of 39 shots. It was also an extremely quiet night for special teams with the Wranglers only on the penalty kill once this game and on the power play a total of three times.
The three-star accolades were presented to Yan Kuznetsov for the third star, Brett Sutter for the second star and Jakob Pelletier for the first star. The Wranglers went into this game on a seven game point streak and made that eight with this win. Dustin Wolf got his third start in a row and tacked on his ninth win onto his league-leading win statistic.

The Wranglers could even up the season series on Thursday night as they trail 2-3 to Coachella Valley after this win. They will be back at the dome for a 7:00 p.m. MT puck drop. Catch this game live or streamed via AHL.tv.
News
Recent articles from Paige Siewert