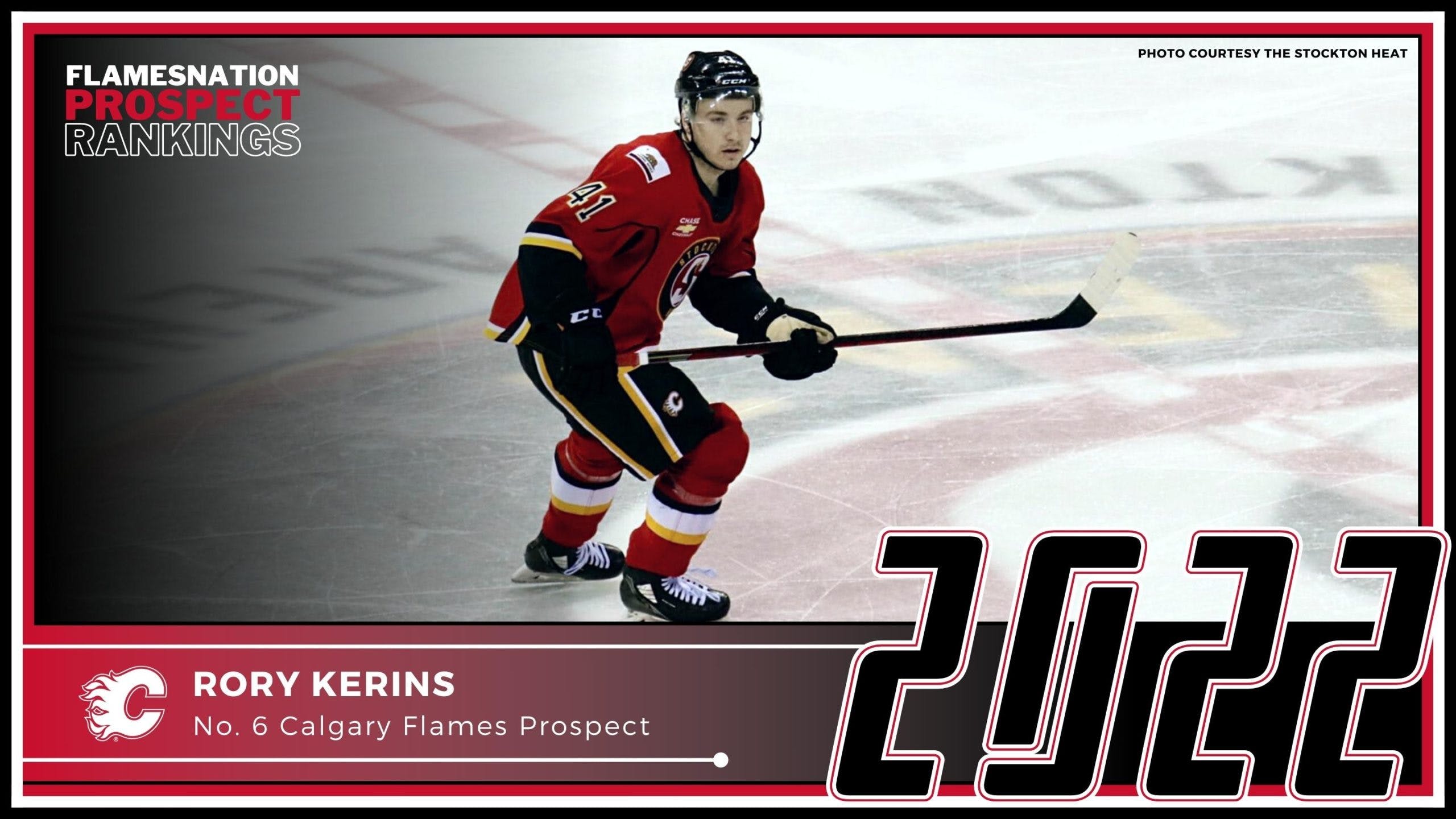 By Angus Hout
5 months ago
In October 2020, the NHL Draft would take place over Zoom. In the sixth round of the 2020 NHL draft the Calgary Flames would select centre Rory Kerins from the Soo Greyhounds. On Mar. 1, Kerins would sign his entry-level deal and is now the fifth member of the Flames’ 2020 draft class to sign with the club, following @Connor Zary, @Yan Kuznetsov, @Jeremie Poirier and @Ilya Solovyov.
Strap in and learn more about this late-round, diamond in the rough who is waiting to show off what he is made of in pro hockey. Kerins is the sixth-best prospect in the Flames system via our 2022 rankings.
Rory Kerins
Left-shooting forward
Born Apr 23, 2002 (Age 20) in Caledon, ON, CAN
5’10″, 174 pounds
Drafted in the sixth round (174th overall) by CGY in the 2020 NHL Draft
Kerins has had a rocky road to say the least when it came to his draft year with the Soo was cut short due to the COIVD-19 pandemic. The year after his draft was a total bust as the OHL was shut down for the entire 2020-21 season. That resulted in 18 months with no OHL hockey for the sixth-round pick. In that time Kerins would suit up for just four AHL games with the Stockton Heat and nothing on paper would come from those games: zero goals and zero assists in that time. But the few months that Kerins would spend with the Heat would impact his game in a very positive way.
With the long hiatus, Kerins would go from an average OHL player to an absolute stud. In his draft eligaible year he would score 64 points in 59 games, last season with the Soo he would score 43 goals and 118 points in 67 regular season games.  In April 2022, Kerins would be named the OHL Player of the Month, playing in six games and scoring four goals and 12 assists. During the playoff run for the Soo, the Ontario native would play in 10 games and score 10 points.
https://twitter.com/OHLHockey/status/1510057414871056387?s=20&t=NO5MbinWy3M1A9KVIeTicA
Once the Greyhounds fell to the Flint Firebirds in the second round of the OHL playoffs, Kerins would find himself with the Heat once again for their playoffs. There he would play another five games and add zero points.
Kerins is described as a great two-way forward and is not afraid to block shots. His vision on the ice allows him to disrupt plays on the ice, as well as being able to find his teammates to make beautiful plays that could explain his 75 assists with the Soo last year. Kerins would ultimately finish second in scoring in the OHL, six points behind @Wyatt Johnston who had 124 points.
Kerins is a Swiss Army knife kind of a player he can score for you on the power play, he can kill penalties for you and his pretty good during even strength play. 12 of Kerins’ 43 goals were during the power play. He’s also a bit of a clutch player in the regular season, scoring eight game-winning goals.
Brock Otten from OHL Prospects provided this rundown of Kerins’ season:

Hard to not be impressed with what Kerins did this year after the year long hiatus. He came back from the pandemic a different player. He was no slam dunk to receive a contract at the start of the year, but he forced Calgary’s hand with his offensive explosion. He’s still a strong two-way presence because of his IQ and tenaciousness; his off puck play has always been a standout quality. However, his on puck play was what really took a giant leap forward. He drove play like few did in the OHL this season. His hands looked quicker. He looked more confident. He was equally as dominant at five on five as he was on the powerplay. He still has that big shot and great scoring touch in tight, however his vision and poise with the puck was significantly better this year. In a nutshell, every part of his game progressed. The only one that didn’t? His skating. He’s still not quite as dynamic of a mover as you like to see in a player who is sub 6 foot. He will need to continue to upgrade his quickness to be a factor offensively at the pro level. I might even expect some growing pains this year as he adjusts to the speed of the pro game and the strength of pro defenders. But down the line (maybe after a few years in the AHL), I do think that he can be an NHL player in some capacity. There’s a versatility in his game and approach that you don’t often see from 100+ point junior players.

Only standing at 5’10”, Kerins has a bite to his game as many smaller players do too. One of the concerns with Kerins was his size he was drafted two years ago he has added 12 pounds going from 174 to 186. 12 pounds might not seem like a lot of weight to add on but to play with extra weight is tough, Kerins’ skating is lacking a little bit. If you’re going to Wranglers games this year you might watch him get beat by defenders from time to time.
Odds are we will find Kerins with the Wranglers. Although extremely unlikely, Kerins can go back to the Soo to play with Greyhounds as an overager. The logical place for him to be would be up in Calgary playing in the AHL. For this upcoming season, our Mike Gould has Kerins projected in the 3rd line centre spot which is a solid place for him to start.