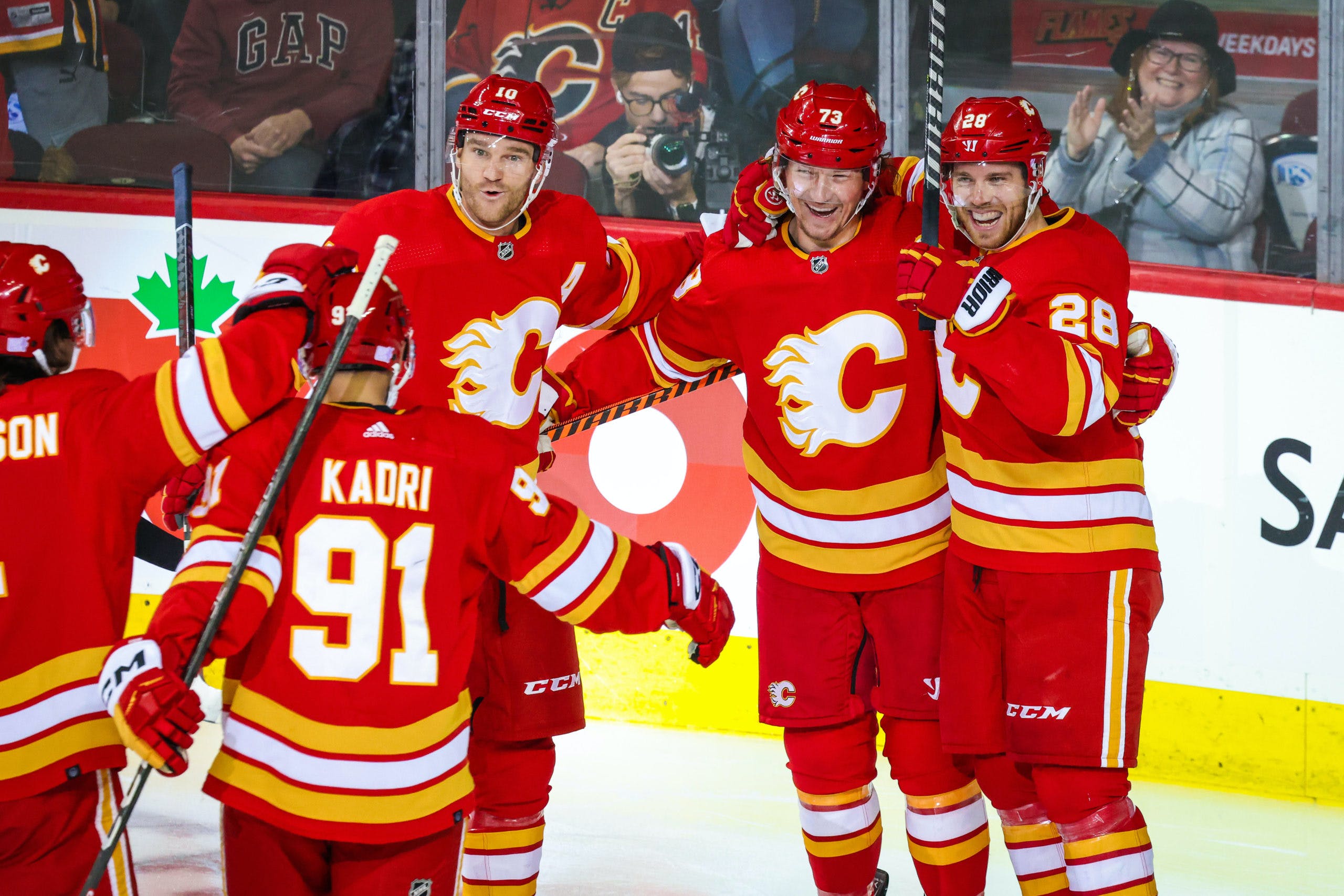 By Robert Munnich
26 days ago
The 2022 off-season was a turbulent one for the Calgary Flames to say the least. The organization was going through monumental change with the departures of Johnny Gaudreau and Matthew Tkachuk.
During that time, Murray Edwards, John Bean and Brad Treliving had to make a decision of what direction they wanted to take the team. Rebuild, or continue to attempt to build a Stanley Cup contender. That decision had yet to be made even after the Tkachuk trade when Calgary acquired Jonathan Huberdeau and MacKenzie Weegar. They could have moved Huberdeau and Weegar for assets.
We officially knew the direction the Flames were going when they signed Huberdeau, Weegar and Nazem Kadri to massive eight, eight and seven-year contracts respectively.
The organization pushed all their chips to the middle. The Flames are all in. Stanley Cup or bust.
The Flames should not stray from that direction before or at the March 3 trade deadline. The Flames have set the direction of the team and they should continue down that road over the next two months.
The main reason for this is because the team has 2-3 years to legitimately compete for a Stanley Cup. After that, who knows what this organization is going to look like?

A large portion of the Flames roster will have their contracts expire at the end of the 2023-24 season. Those players include Elias Lindholm (UFA), Noah Hanifin (UFA), Mikael Backlund (UFA), Tyler Toffoli (UFA), Chris Tanev (UFA), Nikita Zadorov (UFA), Oliver Kylington (UFA), Dillon Dube (RFA), and Adam Ruzicka (RFA).
Either those players will receive big raises like Lindholm and Hanifin, or they will be older players into their 30s whose best days have likely passed them by. That’s not an ideal situation to be in as an organization if you’re looking to sustain long term success.

The Flames have a core group of players who are close to being near the end of their prime performing years. They have to take advantage of this core group before some of them inevitably start to hit their decline in the near future.
There are not a lot of teams that don’t have a superstar who are Stanley Cup contenders with a core group of players all playing into their 30s. Especially in an NHL that continues to get younger and faster as each season passes by.
(**Assuming Elias Lindholm and Noah Hanifin sign 7-8 year contract extensions)

We all know that NHL head coaches have an expiry date. It is not very often you see a head coach last longer than five or six seasons in one place. That rule applies to Sutter.
It’s clear that his message starts to get old and stale with players after four or five seasons. We saw it in Chicago, San Jose, and most recently Los Angeles. The same will likely happen in Calgary.
He is the best coach the Flames have hired since the late 1980s and the organization should do everything they can to win with him behind the bench while his messaging still resonates with his players.

The Calgary Flames prospect group is not one that is filled with numerous potential game changing players. By game changing players I am talking about top six forwards, top four defensemen, and a starting goaltender.
I don’t see a world where the Flames are able to transition a major part of their core and roster over to young players in their development system over the next few seasons.
Dustin Wolf has proved that he can be a difference maker. Outside of him, there are a lot of questions to be answered with the Flames prospect group.
Jakob Pelletier and Connor Zary have had strong seasons in the AHL. But we don’t know if it’s going to translate to the NHL level yet. Matthew Coronato is having a great season in the NCAA with Harvard, but he is not a guarantee to be a top six forward in the NHL. Even if those players do make it to the NHL, it might take them 2-4 years to develop to their peak level of performance.
And on defence, it looks like the only guy who has a legitimate shot to play a long time in the NHL is Jeremie Poirier. And he is still a few years away from that happening.
As previously discussed, the Flames have a lot of expiring contracts coming up over the next two seasons. How many guys from the AHL can come up and take those minutes left behind by veteran NHLers? I don’t know there are as many as Flames fans think.
I present all this information to you to show you that the time is now for the Flames to win. This team is not set up for long term success.
That’s why it is critical for them to go big game hunting before or at the trade deadline. Swing for a Timo Meier. Bring in a high-end bottom pairing defenceman like Luke Schenn.
Continue the strategy of going all in. Do everything you can to win within the next year or two. That’s the direction this organization chose to go down in the off-season. The Flames look like they’re only going to have a couple kicks at the cup, so go for it while you have a chance.
Editorials
Recent articles from Robert Munnich