The Flames’ pricey Gudbranson signing is a head-scratcher 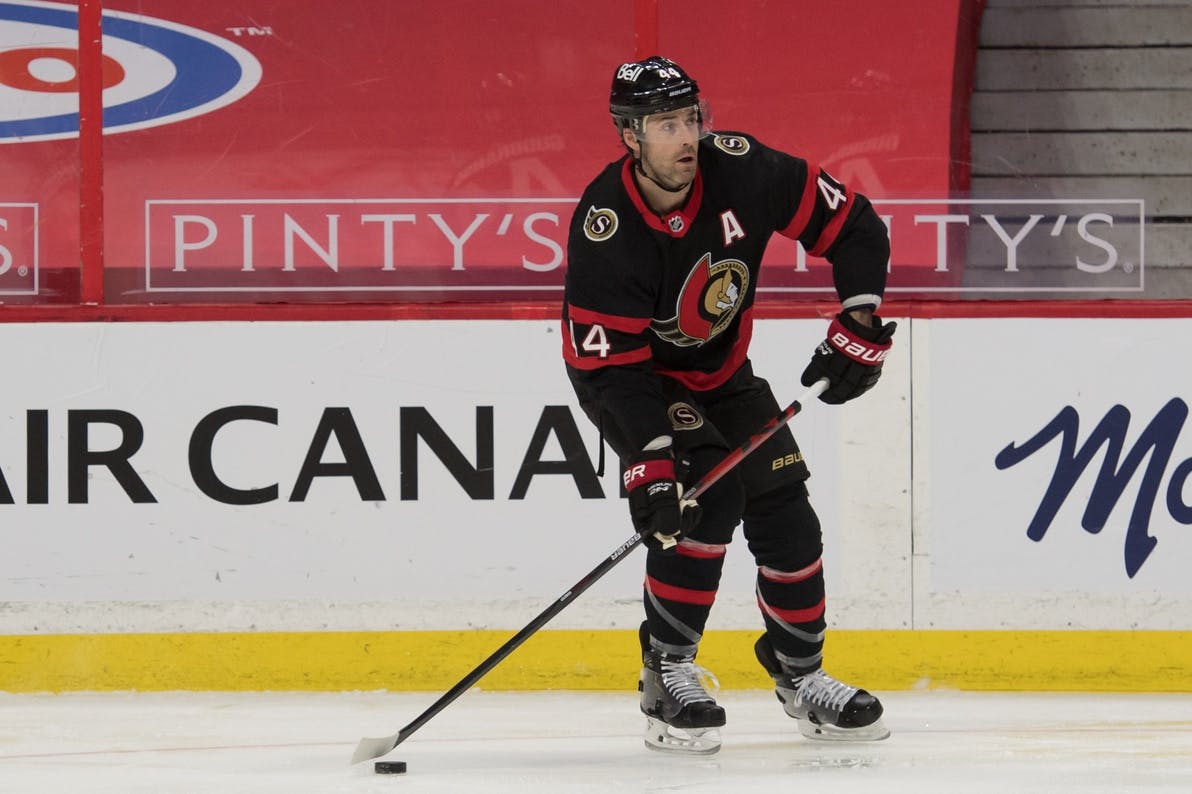 By Mike Gould
1 year ago
Was this always the plan?
The Calgary Flames lost Mark Giordano, their Norris-winning defenceman and captain, to the Seattle Kraken in July’s expansion draft.
Giordano’s departure created a massive hole on the Flames’ blue line. The 37-year-old veteran logged huge minutes right up until the end of his tenure in Calgary and continued playing excellent hockey, providing 12.9 goals above replacement and $11.1 million of value (according to Evolving-Hockey) during the 2020–21 season.
The Flames had to lose somebody to Seattle. Noah Hanifin and Rasmus Andersson project as top-four defencemen for the foreseeable future while Chris Tanev was arguably the NHL’s best pure shutdown defender in 2020–21.
Maybe Flames general manager Brad Treliving could’ve paid to keep Giordano away from Seattle. Would it have been worth it for the middling Flames to pay that (likely high) price? Probably not. (Should they have traded Giordano elsewhere before the expansion draft? Almost certainly, yes.)
Either way, Giordano is gone. Following the expansion draft, the Flames had a Giordano-sized vacancy on defence and needed to make moves to address that position.
Moves, they certainly made. Good moves? Well…
Well…
Well…

The Flames replaced Mark Giordano with Nikita Zadorov and Erik Gudbranson. While we wait for that to sink in, let’s look at some context for the off-season that was.
The summer of 2021 has been particularly heavy on big-name defencemen switching teams, although few of them offer value proportional to their recognition.
Oliver Ekman-Larsson, Duncan Keith, Seth Jones, and Nick Leddy all offer impressive resumes but have experienced significant declines and came with massive acquisition costs for their new teams. Dougie Hamilton is fantastic but it would have taken a miracle for him to return to the Flames.
Beyond Hamilton, it’s possible Giordano was the second-best defenceman to change teams in the 2021 offseason. Ryan Ellis also moved, with the Philadelphia Flyers electing to send Nolan Patrick and Phil Myers to acquire his services from Nashville.
Also traded this summer: Nate Schmidt, Brenden Dillon, Shayne Gostisbehere, Ethan Bear, and (gulp) Rasmus Ristolainen.
Schmidt’s hefty contract likely dissuaded the Flames from acquiring him and it’s unlikely Treliving would’ve wanted to pay two second-round picks for Dillon. Edmonton probably wanted to avoid sending Bear to a geographical rival; the Ristolainen trade was one of the offseason’s most confusing and the Flames were wise to shy away.
Gostisbehere would have made plenty of sense as a target for the Flames. He was sneakily excellent in 2020–21, providing the Philadelphia Flyers with 9.1 goals above replacement—mostly on offence—and scoring 20 points (nine goals, 11 assists) in 41 games.
He only costs $4.5 million against the salary cap for two more seasons and came at an extremely favourable acquisition cost for the Arizona Coyotes. Philadelphia received nothing but cap space in the trade; in addition to Gostisbehere, the Coyotes nabbed two draft picks (a 2022 2nd and a 2022 7th).
After Giordano’s departure, the Flames desperately needed to add defensive scoring. The two defensemen they subsequently acquired collectively scored two goals and 12 points in 100 games last season. (Giordano scored nine goals and 26 points in 56 contests).
While Zadorov is almost entirely ineffective on transition and in the offensive zone, at least he’s capable of suppressing opportunities at 5-on-5. According to Evolving-Hockey, Zadorov provided Chicago with 5.7 defensive goals above replacement at 5-on-5 in 2020–21 compared to -2.3 offensive GAR (and, curiously, -3.3 shorthanded defensive GAR).
The only silver lining to the Gudbranson acquisition is he didn’t cost a draft pick, although he inexplicably cost $1.95 million despite being signed over a month into the UFA period. Gudbranson has, collectively, cost his teams $26.7 million against the salary cap over his 10-season NHL career; according to Evolving-Hockey, he has provided -$25.8 million in value. Yes, that’s negative $25.8 million.
Gudbranson split the 2020–21 season between the Ottawa Senators and Nashville Predators. While, relatively speaking, he was able to keep his nose clean and stay out of the penalty box, Gudbranson got absolutely hammered at both ends of the ice.
A lumbering presence on the right side, Gudbranson joins a Flames defence corps not exactly overflowing with speed. While Hanifin and Tanev—when healthy—can move quickly with and without the puck, the rest of the Flames’ defencemen depend primarily on other attributes to stop opponents.
At his best, Andersson is a smart defender who positions his big frame effectively to interrupt offensive plays. Juuso Valimaki is becoming increasingly proficient at disrupting passes and break-in attempts with his stick.
Gudbranson is renowned for his ruggedness. His 92 hits in 36 games with last year’s Ottawa Senators ranked fifth on the team … but the Flames already acquired Zadorov (190 hits in 55 games last year) for that purpose. At 6’5″ and 222 pounds, Gudbranson may rival Zadorov in terms of size but he’s slower and far less effective in the defensive zone.
With Gudbranson on the ice at 5-on-5, the 2020–21 Senators were outscored 31 to 17. Among regular Sens players (min. 15 GP), only Josh Brown and Christian Wolanin had worse on-ice goals-for percentages than Gudbranson’s 35.42.
According to Natural Stat Trick, Gudbranson had the sixth-worst 5-on-5 on-ice expected goals percentage (45.92) on last year’s Senators. Head coach D.J. Smith typically opted against deploying Gudbranson in high-leverage situations: his offensive zone faceoff percentage (50.16) ranked sixth-highest on the Senators and, according to JFresh, the quality of his typical opponents ranked in the 35th percentile of NHL players.
Gudbranson is now on his sixth team since 2019, having been passed around by Vancouver, Pittsburgh, Anaheim, Ottawa, and Nashville over the last three seasons. He now joins a Flames defensive group that has lost its high-scoring captain and which had trouble in recent years with defending against the ultra-speedy captain of their provincial rival.
If history is to be believed, Gudbranson is unlikely to help the Flames address either of those concerns. At his hefty salary, he’ll likely be a fixture in the lineup.
It’s unclear why the Flames chose this path forward after watching Mark Giordano depart for Seattle. At this point, Calgary’s defensive group looks woefully outmatched compared to many of its Pacific Division counterparts.
It appears the Flames will have to collectively overachieve to do damage in the 2022 playoffs. It’s not a good sign when that’s the best-case scenario for a supposed contender, particularly one with a star entering his final season before free agency.
The Flames losing Giordano for nothing was one thing. How would they respond to the loss of Johnny Gaudreau?
If this underwhelming offseason is of any indication … well, don’t get your hopes up.
Uncategorized
Recent articles from Mike Gould