The good, bad, and ugly of the first quarter of the Calgary Flames season 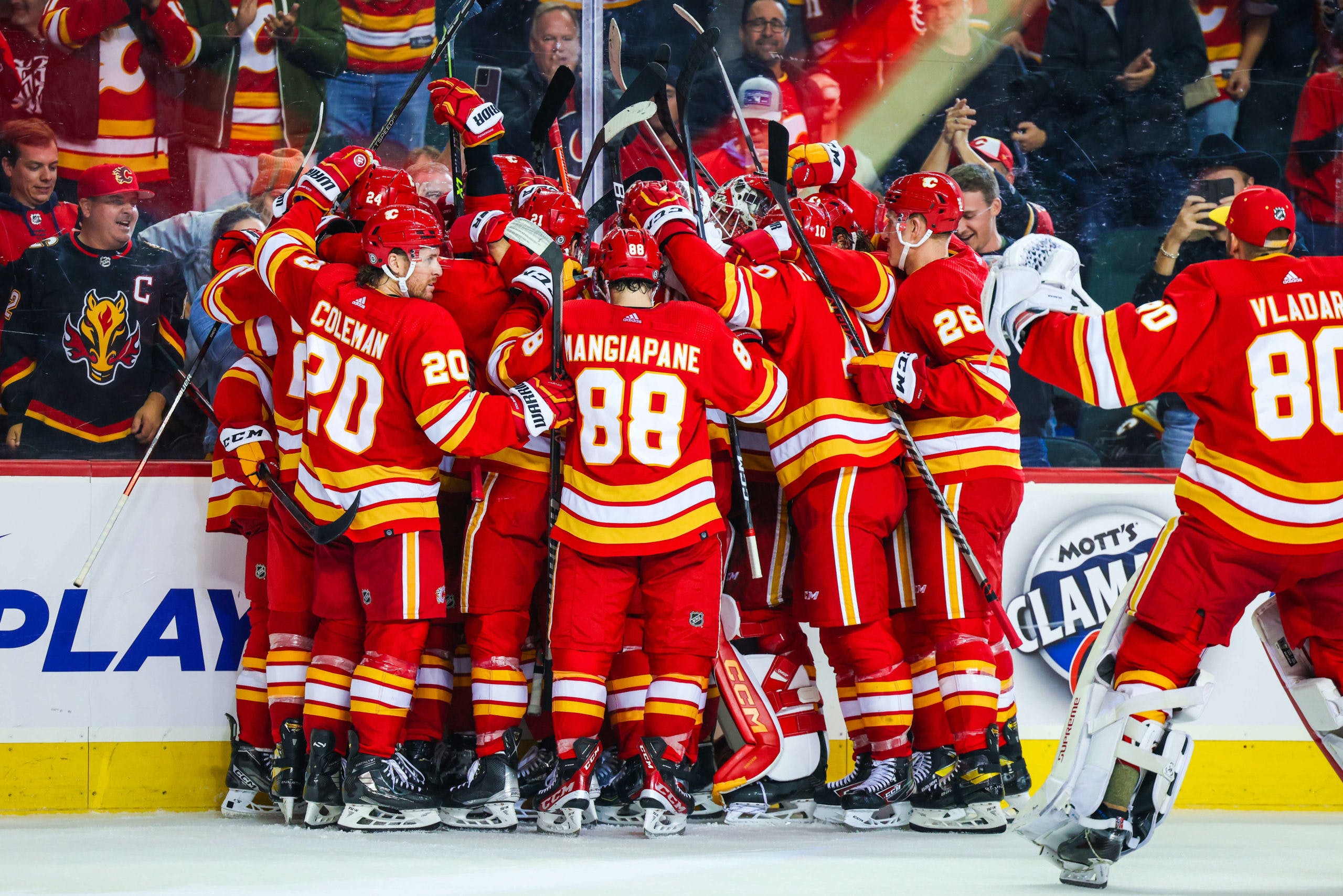 By Robert Munnich
2 months ago
Normally I’d do a deep dive into the latest 5 game segment the Flames played. But because we are officially at the quarter mark of the season, I will provide the good, bad and ugly of the first 21 games of the 2022-23 campaign.
It’s been a tale of three seasons so far. First the Flames went 5-1-0 to start the season, beating some of the best teams in the NHL. Then they lose seven games in a row. And now have recently gone .500 (4-3-1) in their last eight games. Three different segments with three completely different results.

One thing you can not question about this version of the Calgary Flames is their work ethic. This has been an issue in seasons past according to former head coaches Glen Gulutzan and Geoff Ward. Those two previous coaches were dumbfounded after some of the efforts the Calgary Flames would put forth on the ice.
That certainly is not the case anymore playing for a coach like Darryl Sutter. Sutter does a great job of holding his players accountable for their efforts each and every night. Flames players know that they are not going to get away with a performance where they don’t give it their all. Like Sutter has said in the past, the Flames are an honest, hard-working team. That is something to be respected and applauded.

Players playing at or above expectations

Nikita Zadorov
Heading into the season, Nikita Zadorov was looking like he was going to once again be the Flames number six defenseman on the depth chart, like he was in the 2021-22 season. But with the absence of Oliver Kylington, and injuries to Chris Tanev, Zadorov has had to step up and play a bigger role. And he has done a great job of that.
Zadorov has played the third most minutes of any player on the Flames roster at 5 on 5. The Flames have outscored their opposition 20-13 when Zadorov is on the ice and he is first on the Flames in CF% at 60.67%. Zadorov has also been a big part of the Flames penalty kill, is one of the few consistent physical players, and has played with a ton emotion, something the Flames are lacking from some of their players.
Zadorov is on pace to score 16 goals and 8 assists which would crush his career high in goals and be a career high in points.
Tyler Toffoli
Toffoli has had a nice start to his 22-23 season from a production standpoint. He is currently on pace to score 27 goals which would be the third largest goal total of his career. Heading into the season there were mixed opinions on how Toffoli would perform. There were concerns based off his finish to last season. But he has quieted all doubters (myself included).
The Flames have outscored their opposition 14-9 when Toffoli is on the ice. Toffoli leads the Flames in xGF% with 59.99%, third in HDCF% with 59.55%, and third in SCF% with 57.44%. He’s been one of the Flames best, and most consistent forwards to start the year.
Michael Stone and Adam Ruzicka
I am putting these two players together because both have only played in 11 games up to this point. The sample size for their performance is small, so I don’t want to dive into it too deeply.
Adam Ruzicka has been a very pleasant surprise, specifically since being put on a line with Lindholm and Toffoli. In his last eight games, Ruzicka is tied for the Flames scoring lead with eight points. This would be huge for the Flames if Ruzicka can stick in the top nine. He would be the only player drafted by the Flames between 2017-22 to be playing on the NHL roster.
Michael Stone has also played above what was expected of him. He has gone from someone fighting for a job on a professional try out in training camp, to an important member of the Flames in the regular season. He is particularly important on the Flames inept power play. Stone is on pace to score 15 goals and 30 assists over an 82-game pace. Not bad for a PTO.

Shoutout to Dennis Gilbert for dropping the gloves. He did a great job bringing some energy to the Flames lineup.

Unfortunately for the Flames, a lot of their best players on paper have not had a great start to this season. I would include Jonathan Huberdeau, Nazem Kadri, Andrew Mangiapane, and Noah Hanifin in this group.
The most disappointing player so far this season has been Huberdeau. There was a lot of hype around Huberdeau heading into this season. He set an NHL record for most assists in a single season by a left winger with 85. I think Flames fans expected a game breaking player to come to Calgary. We have yet to see that from Huberdeau. There are too many nights where Huberdeau makes little to no impact on a game. That simply isn’t good enough for a player of his caliber. He is currently on pace to score 14 goals and 32 assists. That’s would be his worst production since his 2013-14 season. He needs to get back to being the over a point per game player that we know he can be.
Andrew Mangiapane is on pace to score 12 goals and 16 assists. He has not been close to being as dangerous as he was last season. I would love to see him back on a line with Mikael Backlund and Blake Coleman.
Nazem Kadri had a great start to the season, but he has cooled off as of late. In his last 15 games, Kadri has 4 goals, 6 points, and is a team worse minus -8. He needs to get back to being a top end center if the Flames want any chance of making and doing damage in the playoffs.
Noah Hanifin has not lived up to expectations thus far. He is struggling on the defensive side of the game. He is turning the puck over and losing more one on one battles than he was last season. At 5 on 5 among the 19 Flames players who have played at least 120 minutes, Hanifin ranks last in CF% (46.36%), 17th in xGF% (47.73%), 18th in SCF% (43.81%), and 18th in HDCF% (44.85%). Those numbers are hard to obtain when playing in a high volume shooting, tight checking, Darryl Sutter system.

I don’t like questioning Darryl Sutter. It seems like every time we do that, he proves us wrong. But I must be critical of the lines he has put together because they are simply not working.
We have seen a bunch of variations of the lines since the start of the season.
(Thank you, Pat)
(Thank you, Pat)
(Thank you, Brendan)
None of these combinations have really worked for the Flames thus far. There was some success with the first grouping of lines early in the season by that fizzled out quickly.
Having Milan Lucic playing with top six talent makes absolutely no sense. And Adam Ruzicka is not cut out to be a fourth line player in the NHL.
The one thing that bothers me in the most recent line combos is the fact Jonathan Huberdeau is playing on a line with Mikael Backlund and Blake Coleman/Trevor Lewis. Huberdeau should be playing with other talented linemates. Not guys who are not natural goal scorers. Backlund and Coleman have been solid in their role as shut down forwards, but they’re not guys you should be playing with one of the best passers in hockey.
My ideal lines for the Flames are as follows:
I wrote about this in greater detail last week.

It has not been the start that Jacob Markstrom wanted this season. To be blunt, he has been really bad. The numbers show it.
Among 35 goalies to play at least 500 minutes, Jacob Markstrom ranks 30th in goals saved above average (-6.97), 29th in save percentage (0.889%), 28th in high danger save percentage (0.795%), and 23rd in goals against average (3.03). The Calgary Flames rank 27th in the NHL in save percentage. A big reason they are that low is because of Markstrom. He needs to be way better. This is a Flames team that is not going to come close to scoring as many goals as they did last season. They are going to be in tight checking games on the vast majority of nights. Markstrom needs to do a better job of keeping them in it.
The most concerning part of Markstrom’s game is his propensity to let in weak goals. These are the types of goals that take the wind out of your sails and kill all momentum the team in front of him may have had.
I am not worried about Markstrom long term. This is just a tough stretch of games for the Vezina Trophy finalist from last season. He has proved throughout his career that he is a high-end goalie in the NHL. He’s not the only good goalie to struggle to start this season. All of Thatcher Demko, John Gibson, Andrei Vasilevskiy, and Juuse Saros have all got off to slow starts.
There you have it for the good, bad and ugly of the first quarter of the Flames season. I know things have not looked great so far. I still think this is a very good team and that they are going to start to figure things out around the 30-40 game mark of the season. To end on a positive and give some hope for the next 61 games, I’ll leave you with a clip from a Darryl Sutter press conference. Give this team some more time to figure things out. Darryl will get them going soon enough!
Editorials
Recent articles from Robert Munnich