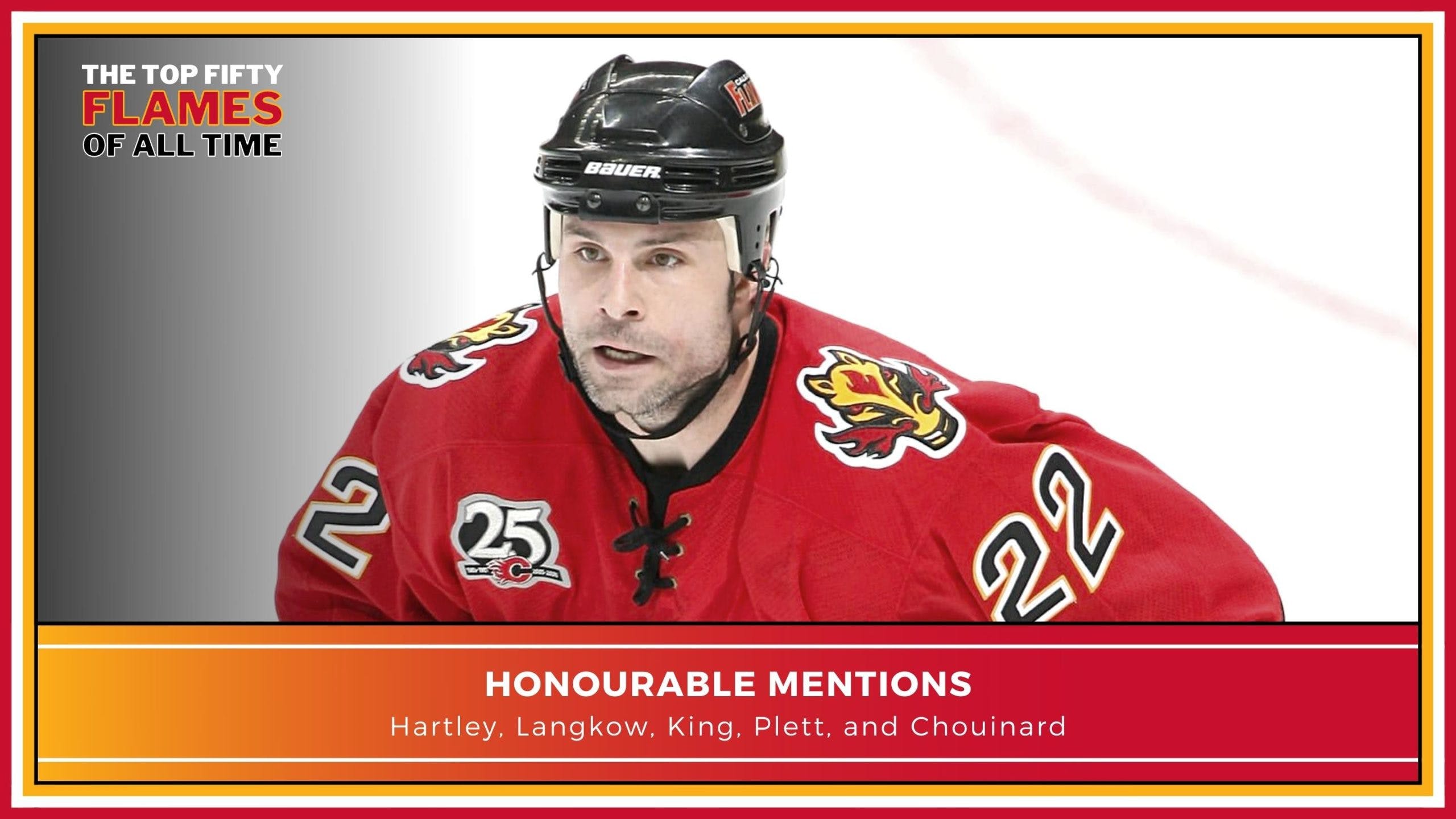 By Ryan Pike
5 months ago
Way, way back in 1972, the Calgary Flames began play in the National Hockey League as the Atlanta Flames. Now, 50 years later, the Flames will reach the 50th anniversary of their very first game in October. To commemorate the occasion, we’re counting down the Top 50 Flames of All-Time – 50 individuals whose contributions on and off the ice made the franchise what it is today.
The countdown proper begins tomorrow, but we’ll raise the curtain today with five honourable mentions.

Player, 1974-83
A second-round selection by Atlanta in 1974, Chouinard made minor big-league appearances for the next two seasons before making the Flames’ roster full-time in 1976-77 and established himself as a really reliable scorer before eventually being traded to St. Louis.
Chouinard broke out in 1978-79 with 50 goals and 107 points; he was the first Flame to ever score 50 goals and he and Bob MacMillan were the first players with 100 points. Chouinard was the franchise’s all-time points leader for three seasons before being surpassed by Kent Nilsson. He just missed the cut for the top 50.

Player, 2004-11
One of the most underrated players in franchise history, Langkow was acquired in a swap with Phoenix that made Denis Gauthier and Oleg Saprykin members of the Coyotes. One of the more savvy two-way players on his time, Langkow became a tough-minutes fixture for the Flames and was usually used in a manner not dissimilar to how the Flames use Elias Lindholm lately: he played with Jarome Iginla and was his line’s two-way conscience.
Langkow received Selke Trophy consideration early in his Flames run, but injuries and age wore him down as he got further into his 30s. He was traded back to Phoenix for Lee Stempniak.

Player, 1975-82
A fifth-round selection in 1975 by Atlanta, Plett was born in Paraguay but grew up in Ontario. A rugged forward who was arguably the spiritual predecessor to Matthew Tkachuk, Plett won the Calder Trophy in 1976-77 by virtue of a 32-goal rookie campaign. He had a 38-goal season in 1980-81 after the club relocated to Calgary.
Plett wasn’t a consistent enough offensive player to become indispensable for the Flames, but he was the first player in franchise history to reach 1,000 penalty minutes and managed to score key goals from time to time. HockeyFights.com would’ve loved him.

Head Coach, 2012-16
A polarizing figure, Hartley was the right coach for the Flames until he wasn’t. Brought in by then-general manager Jay Feaster to guide a rebuilding young club, Hartley brought a drill sergeant mentality to the club and reinforced the importance of structure and hard work. Unfortunately, Hartley wasn’t exactly a master tactician, and his fallback tactic was trying to get his team to merely work harder.
Despite his flaws, Hartley was a central figure in several memorable Flames moments and accomplishments: the line brawl in Vancouver, the first playoff series win in 11 years, and the first Jack Adams winner in franchise history.

President/CEO, 2001-18; Vice Chairman/CEO, 2018-19; Vice Chairman 2019-20
King almost made the top 50, and it was really tough to keep him off of it – the off-ice figures that ended up on the main list were almost entirely hockey operations personnel or team owners. But we couldn’t completely leave out King because the Flames could’ve gone under without him.
The longtime team president for the better part of two decades, King took over a financially embattled franchise from predecessor Ron Bremner and did a ton of work behind the scenes to cement the club’s future in the city of Calgary.