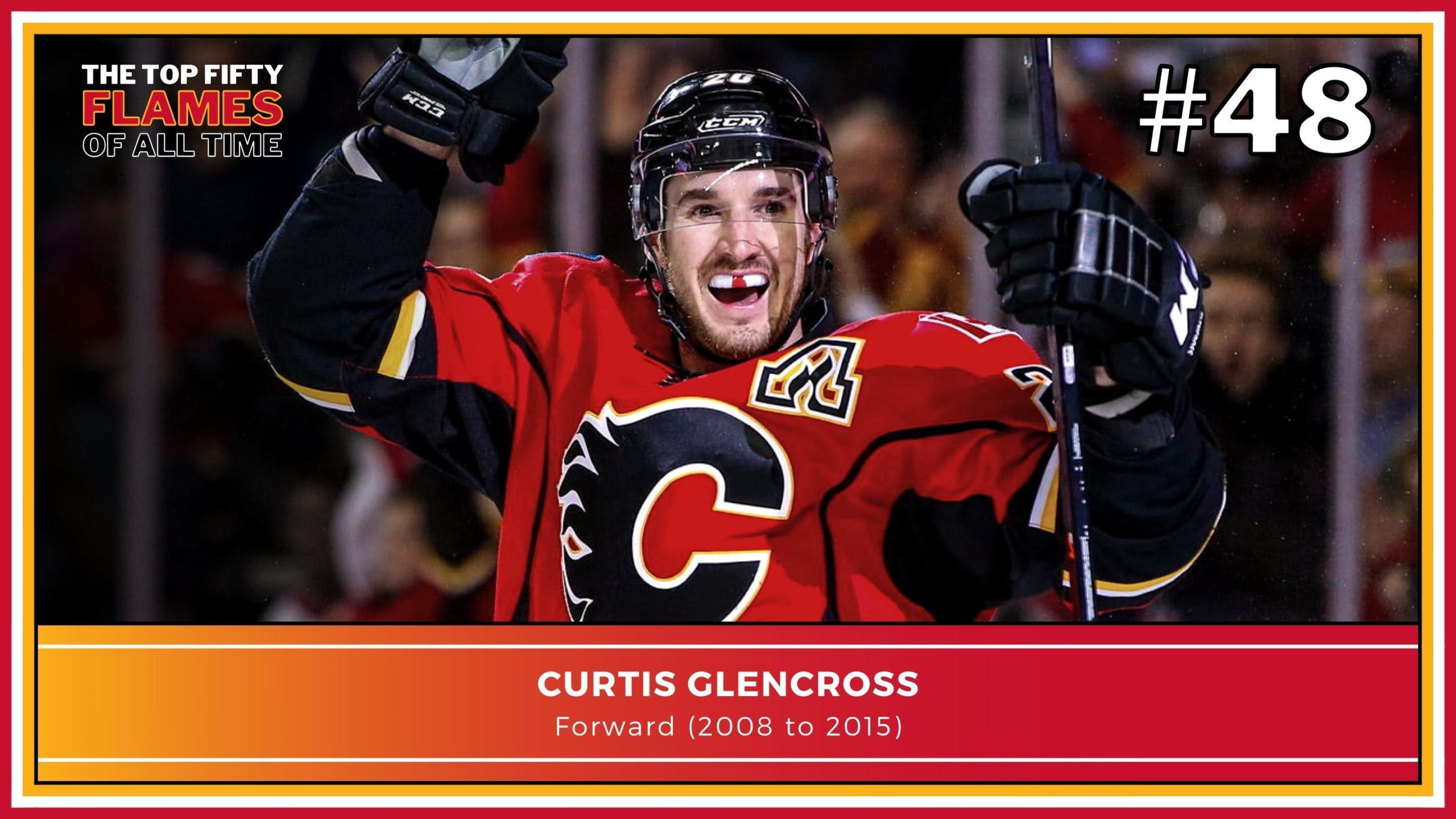 By Ryan Pike
5 months ago
From time to time, there are players that land on the Calgary Flames roster whose demeanour and playing style more or less embody what fans think the Flames should be. Typically, we use descriptors like “gritty” to describe these types of players, and these guys take on the jobs on the team that are some of the toughest.
Arguably the best of these role players is the 48th name on our list: Curtis Glencross.
Player, 2008-15
Born in Saskatchewan but raised in Alberta, Glencross worked his way to the National Hockey League by taking the scenic route. Undrafted, he played with the Alberta Junior Hockey League’s Brooks Bandits and then spent two seasons with the University of Alaska – Anchorage before signing a pro deal with the Anaheim Mighty Ducks at the end of the 2003-04 campaign.
Glencross spent three seasons largely playing in the American Hockey League, playing just two NHL games with Anaheim and seven more with Columbus, before becoming a full-time NHL player in the 2006-07 season and splitting time between Columbus and Edmonton. The Oilers opted not to retain Glencross that off-season, and he ended up signing a three year deal down the road in Calgary with the Flames.
Simply put, Glencross fit with the Flames, and it probably doesn’t hurt that his success with the Flames came after the Oilers passed on him. A decently skilled player on both sides of the puck, Glencross’ game was elevated by his willingness to crash, bang, and generally out-work and out-battle whoever was on the other side of the ice from him. He played in every in-game situation, and became almost as associated with shot-blocking as teammate Kris Russell was. He wore an alternate captain’s A for three seasons as well.
Bless him, but Glencross had everything down except for his timing – he arguably would’ve been a great fit on the 2004 Flames with his style, but he had the bad luck of arriving as the Iginla Era Flames began their decline. Despite this, Glencross played every game like he thought it was Game 7 of the Stanley Cup Final, and his animated goal celebrations earned him the nickname “Scoreface” among the Flames fanbase. A typical Glencross game included a few big hits, a few key shot blocks, and a couple decent scoring chances.
Off the ice, Glencross was a fixture in the community, and his charity work earned him the club’s Ralph Scurfield Humaniatrian Award in 2011-12. As a an alumni member, he remains very visible in the community – there’s a good chance that if you go to a handful of events involving Flames alumni, Glencross will be there.
Glencross wasn’t the most skilled player, but his game was elevated by his work ethic and willingness to play a sometimes unforgiving brand of hockey. By the end of his Flames tenure, injuries had slowed him down, and he didn’t last in the NHL very long after the Flames traded him at the 2015 trade deadline. But in many key ways, Glencross embodied what the Flames brass (and their fans) wanted the club’s players to embody: hard work, community spirit, and some truly excellent facial expressions after scoring goals.