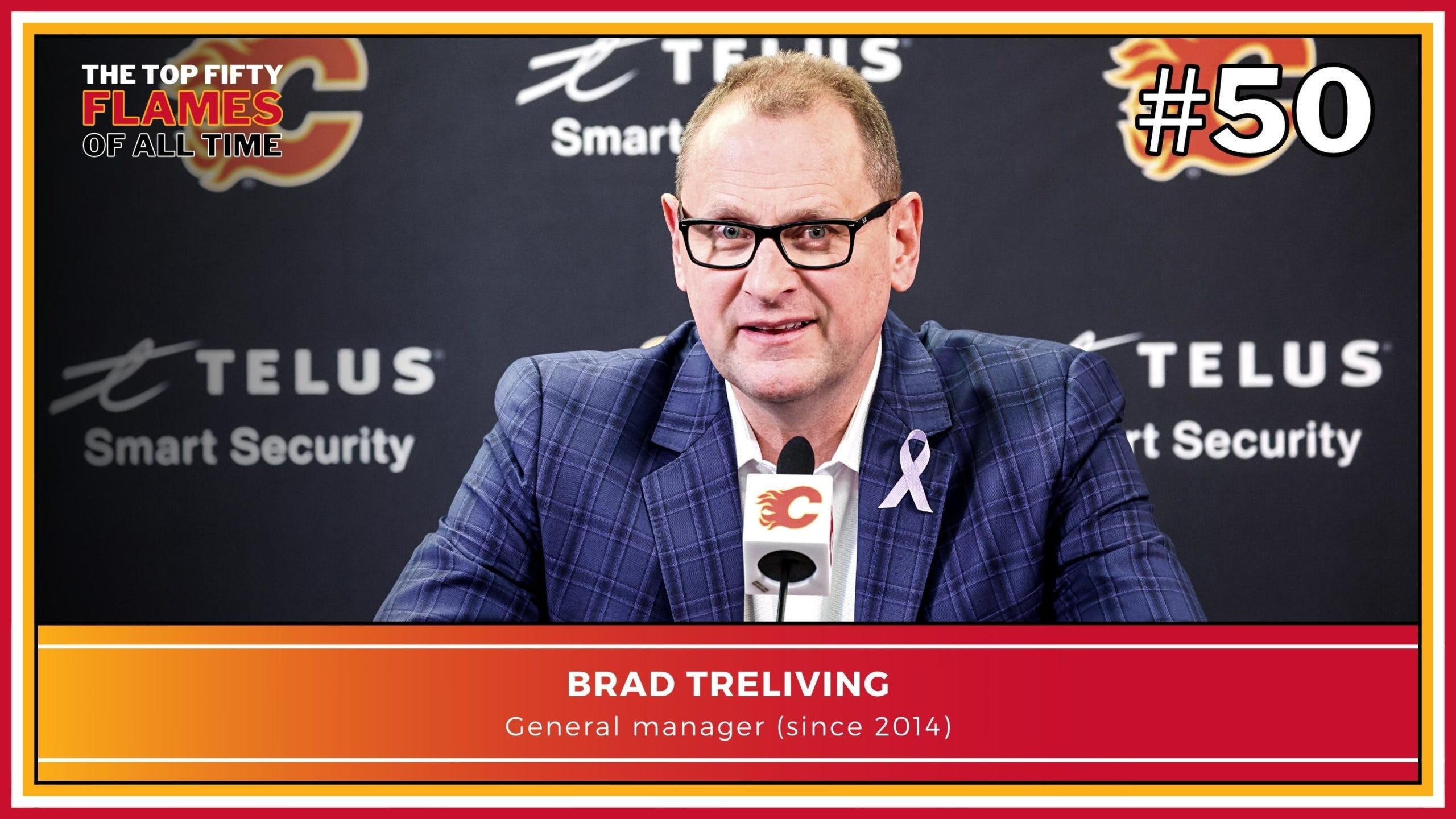 By Ryan Pike
3 months ago
Over the course of the past five decades, the Calgary Flames have had many key contributors on and off the ice. But in the salary cap era of the National Hockey League, there may be no tougher job than that of general manager.
Only one Flames general manager has taken over a club in the midst of a rebuild and managed to help the club find its way back to prominence. #50 on our Top 50 Flames of All Time is Brad Treliving.
General Manager, 2014-present
Treliving has one of the weirdest resumes in the game.
Once a defenceman in the American Hockey League and ECHL, Treliving opted to learn the business side of the game as he probably didn’t have the chops to make the NHL as a player. After retiring from playing duty, he soon co-founded the Western Professional Hockey League and oversaw the merger with the Central Hockey League.
Eventually Treliving drew the attention of the NHL, and he ended up joining Don Maloney with the Phoenix Coyotes as his assistant general manager in 2003. By 2014, Treliving had developed a savvy reputation within hockey circles, and he was reportedly the only individual interviewed by Brian Burke for the general manager job in Calgary. He was the only person Burke felt he needed to speak with.
Treliving inherited a Flames club that had recently bottomed out, having finished fourth-from-last in 2013-14 after trading away Jarome Iginla the prior spring. He hasn’t been the perfect general manager, but on his watch the Flames have become relevant in league circles after being a bit of an afterthought during the latter part of Darryl Sutter’s tenure (and essentially all of Jay Feaster’s).
But look at the things that have happened under Treliving:
Treliving’s overseen some really efficient drafting, finding quality hockey players both early and late in the draft – case in point: Dustin Wolf, who dressed for a pair of games last season, was the fourth-from-last player drafted in 2019. Treliving’s also been adept at locking down home-grown players to cap-friendly deals with regularity.
Treliving’s been at the helm for some really smart trades, too. His “asset accumulation phase” over his first few seasons landed him a bunch of extra draft picks, which allowed him to trade for Dougie Hamilton, then turn him into Noah Hanifin and Elias Lindholm. More recently, he landed Tyler Toffoli with a calculated mid-season gamble, and Jonathan Huberdeau and MacKenzie Weegar by flipping Matthew Tkachuk to Florida.
Treliving hasn’t been perfect. He arguably overpaid for toughness when he acquired Travis Hamonic, and some of his free agent gambles have been a bit heavy on both dollars and term – Troy Brouwer and James Neal stand out. The Flames also have arguably underachieved in the post-season under Treliving: they’re 10th in the NHL in regular season wins but just 19th in playoff victories.
For what the Flames needed at the time – a steady hand to steer them through the rebuild and a fairly creative mind to build them into a pretty good hockey team – Treliving has been exactly what the doctor ordered.