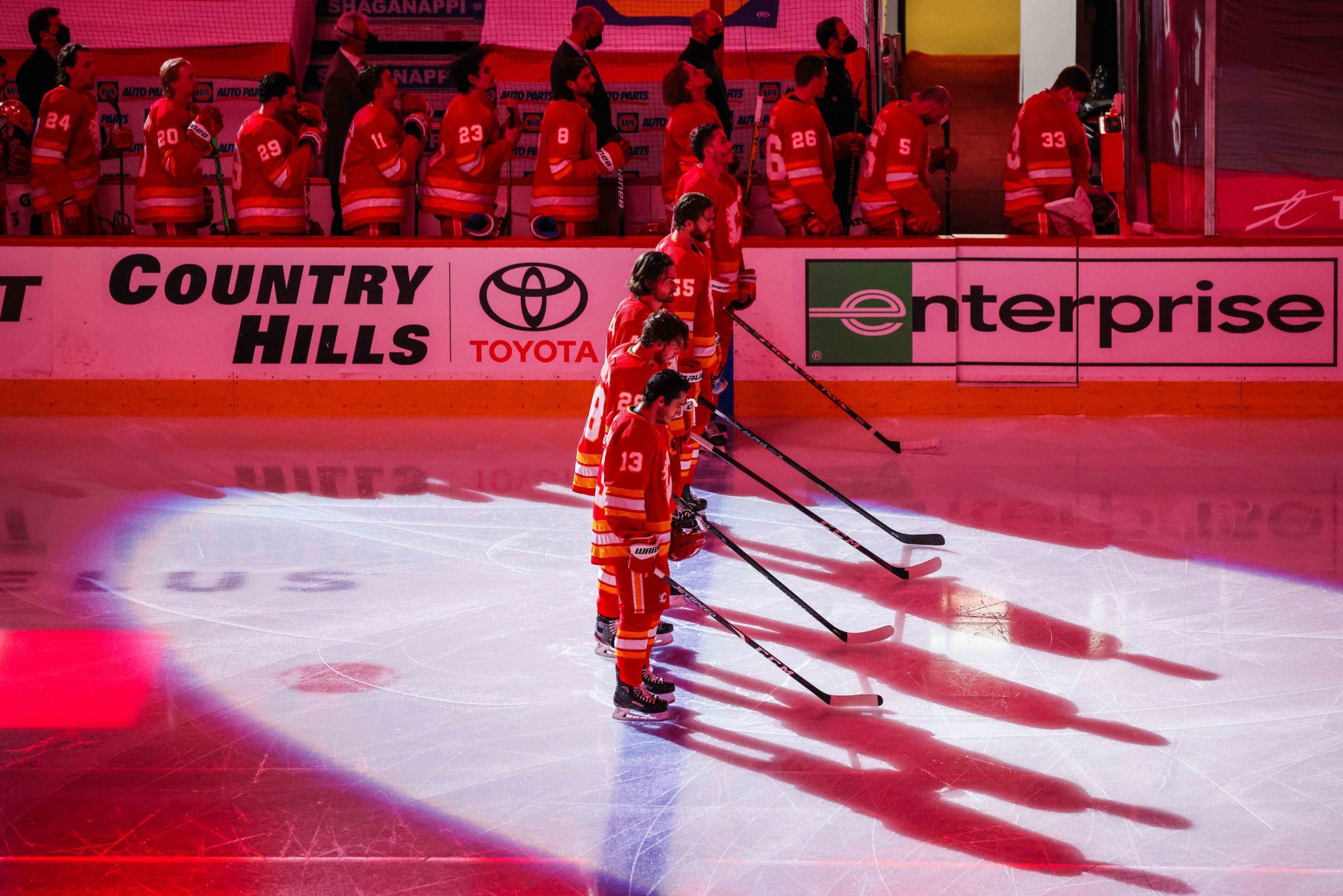 By Ryan Pike
1 year ago
The last few weeks for the Calgary Flames have been busy. A few key players have departed, but the club has also restocked at the 2021 NHL Draft and via trades and free agency. Here’s a quick look at how the club’s positional depth chart as we sit roughly six weeks before training camp.
Names in parentheses are unsigned prospects.

The situation is net is pretty straight-forward. Markstrom is signed for several years and Wolf is the goalie of the future. Vladar and Werner give the team a bit of insulation in terms of giving Wolf some time in the minors to adjust to pro hockey.

The top three (Hanifin, Zadorov, Valimaki) are the defined NHL group. Mackey is likely ahead of Kylington for call-ups or depth duty. Gravel is veteran depth for the farm. Poolman, Kuznetsov and Solovyov are going to be on the farm this season, though Kuznetsov has the option to go to QMJHL Saint John depending on how things shake out in training camp. Poirier and Whynot will both be in junior this coming season.

There’s a decent amount of depth on the left side. That’s not quite the case right now on the right side, which has two slam-dunk NHLers (Tanev and Andersson) and then some question marks. Welinski projects more as a depth player (such as a seventh defender) than an everyday option, and surely the Flames would like to have another right shot on the AHL level, too.
There’s definitely work still left to do on the right side this off-season.

Disclaimer here: we’re basing this off what the NHL has these guys listed as, and obviously there will be some overlap.
The NHL group is the well-defined top three, and there’s some nice depth there. Gawdin, Ruzicka and Froese are (a) great AHL centres and (b) at worst functional NHL players, with Gawdin and Ruzicka young enough that they could become regulars as early as this season. Pelletier and Zary are the X-factors here, as they could be in Stockton or they could push for NHL work, though that would probably be on the wings.
Beyond the pro players, there are some nice longer-term prospects. Francis was superb in the Q last season. My dark horse here is Nodler, who’s developed a reputation as a strong two-way college centre but needs to start moving the needle offensively.

The NHL group is pretty good here, four-deep with effective NHL players. The AHL group isn’t too shabby, with two younger players and an AHL veteran in Kirkland to help them along. The depth drops off from there, with Heineman and then some longer-term projects with much less certainty in their projections.

The NHL group is fairly well defined, with five fairly decent NHL bodies (with two of them being left shots). Phillips is the next in line, followed by Coronato and a lot of question marks. The Flames add to this group every year in an effort to give it depth, but this remains the big organizational weakness on a positional basis. The AHL group looks fairly lean here.
What do you think of the Flames’ organizational depth? What positions do you think they need to keep working on? Sound off in the comments!
Uncategorized
Recent articles from Ryan Pike