What Calle Jarnkrok brings to the Calgary Flames 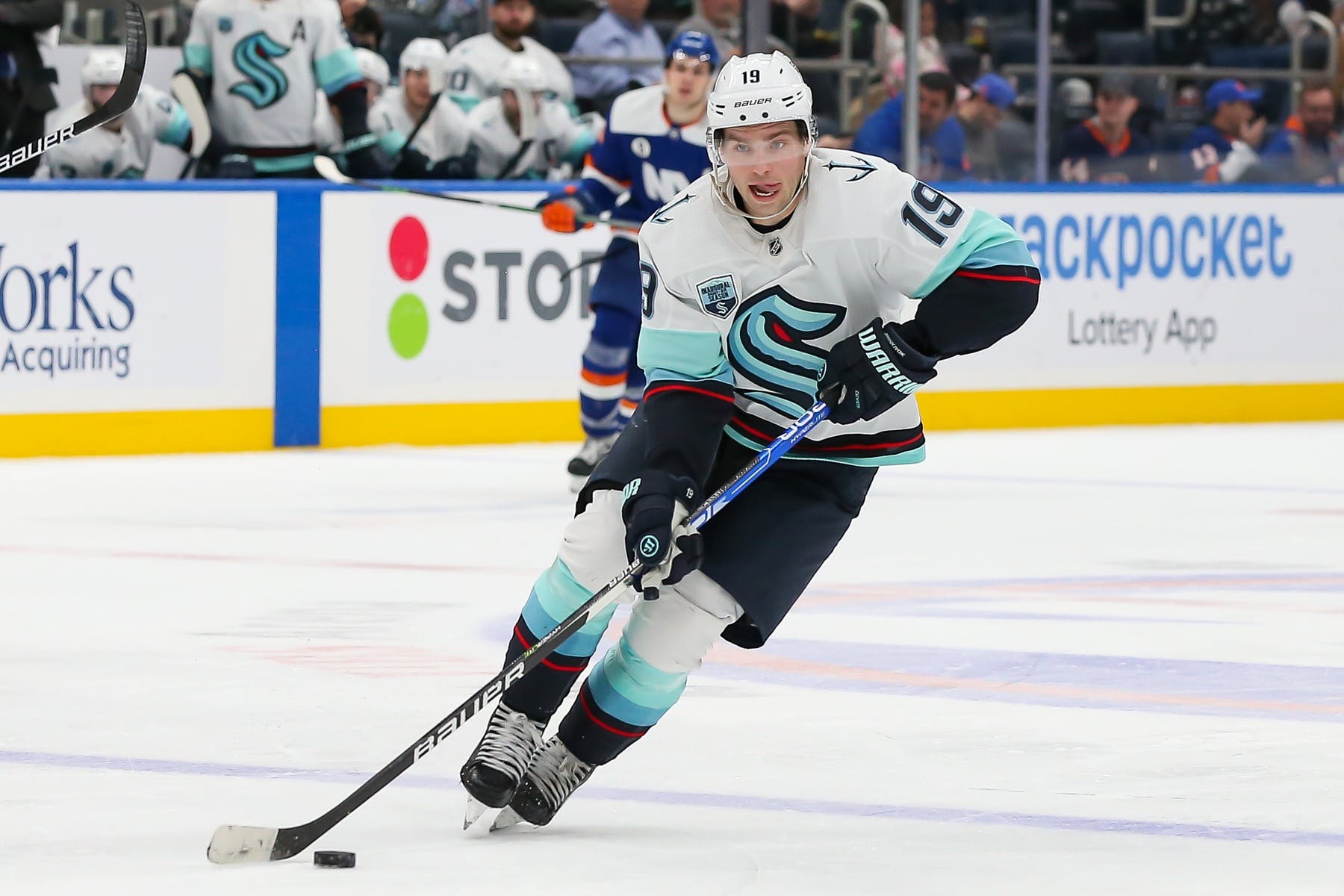 By Shane Stevenson
8 months ago
On Wed., Mar. 16 the Calgary Flames sent a second-round pick in 2022 (Florida’s), a third-round pick in 2023 and a seventh-round pick in 2024 to the Seattle Kraken for forward Calle Jarnkrok (at 50% salary retained, for a $1 million cap hit).
Let’s take a deep dive on the type of player he has been – especially the past 3 seasons – and looking at what type of impact he can bring the Flames as they make a push for the Stanley Cup playoffs.

We’ll refer to this graphic again to start the defensive impact, but for now we are just going to look at the offensive side of Jarnkrok’s game (top part of rink pictures).
The number one thing that stands out from year to year is where Jarnkrok gets his chances from. A larger portion of attempts from the slot to the blueline shows that he’s always got the tendency to be in defensive position. He’s not the guy that’s going to drive the net and create chances around the crease, but he doesn’t need to be with guys like Mangiapane and Toffoli on the wings who excel in that area of the game.
One of the things he does really well despite not getting chances around the net is being able to finish off his chances with an above replacement finishing percentage. 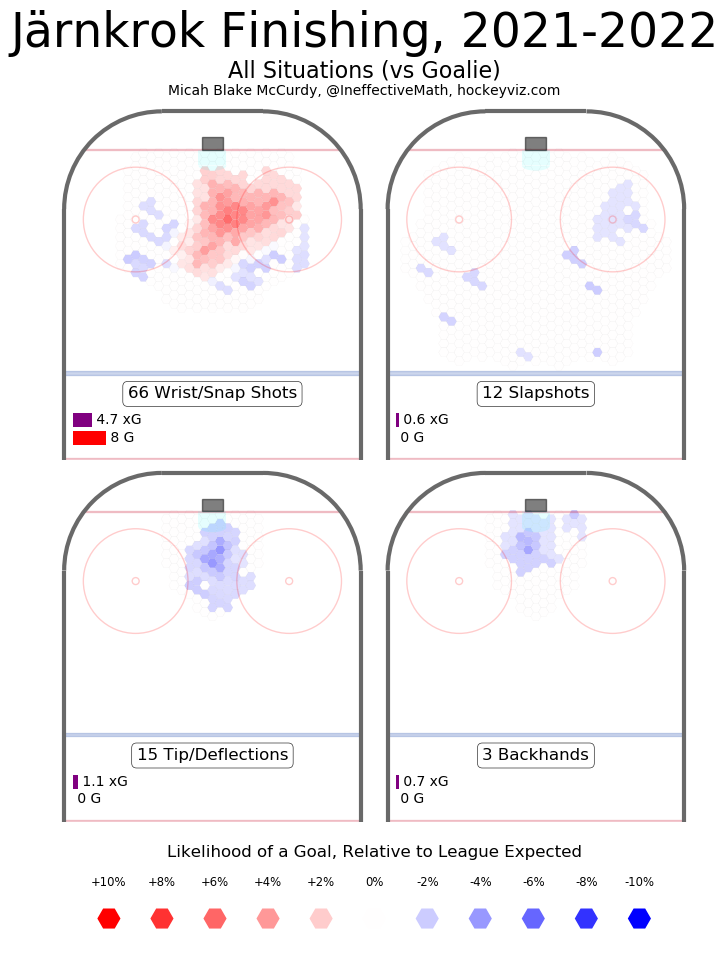 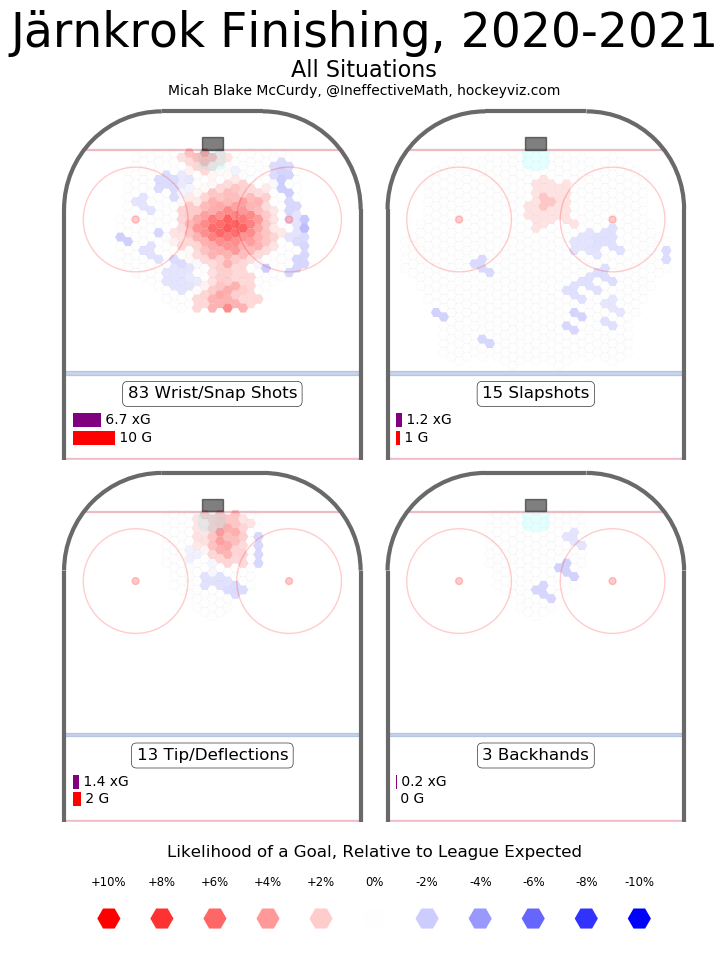 The two shot maps displayed (2022 & 2021 seasons) clearly show Jarnkrok likes to shoot from the slot and has an above average wrist shot. By no means should we expect him to produce at even a 0.5 point-per-game pace, but when he does get a chance from the slot he knows how to finish it off. Mangiapane, Toffoli, Coleman, Lucic, and even Dubé can all get in on the forecheck hard – win possession down low – and have complete confidence to know that if they get the puck free Jarnkrok will be in the slot ready to shoot.
He’s not a driver of offence, but his presence in how well he plays defensively can free up linemates to be a bit more aggressive down low. Could he go on a shooting percentage heater? That’s always possible – but I would expect more along the lines of regular 3rd line defensive centre production.

Now the fun part – we get to discuss the bottom rink and how much of a tremendous defensive player Jarnkrok is.
The above rinks show his year-to-year progression and other than 2015-16 Calle Jarnkrok has been beyond exceptional. Him playing so high in the offensive zone is a direct correlation to him playing defence first hockey. Jarnkrok and his game is built around preventing goals more than scoring them. Basically he’s a defenceman’s best friend – always being in the right spot to support them. His style of play could also free up the Flames defence to take more risks, but with how Calgary plays their D take minimal risks – helps the forwards drive play up the boards through the neutral zone so they can get separated from the puck before the opposition makes it to the attacking zone. Jarnkrok should be able to slot right in and find success doing this – it’s his modus operandi.
His right hand shot up the middle is a massive add for Calgary as it gives them extra face-off options. Jarnkrok can be added to the penalty kill rotation too – as we see from his 5v5 impact he’s got a natural tendency to play defence first. The Flames PK is aggressive and ranks in the top 5 league wide – Jarnkrok projects to help them actually improve that.

Primarily it seems Jarnkrok will be stapled to the 3C position to start, but is versatile enough to be able to shift to the wing if the coach deems it necessary. The Flames now have so many options to give themselves many different looks. If they reunite Mangiapane-Backlund-Coleman they can run Dubé-Jarnkrok-Toffoli, or even throw Lucic/Lewis there to make it a more defensive centric line. It’s not out of the question to even see Jarnkrok-Monahan-Toffoli at some point as well (Lewis/Richardson can play 4th line centre). The depth Calgary now has up front should terrify teams – Calle Jarnkrok makes it so the Flames could match-up with any team in any way and come out ahead.
Buckle up folks – the Red Mile is poised to be re-ignited… and soon.