What will the Calgary Flames’ defence pairings look like next season? 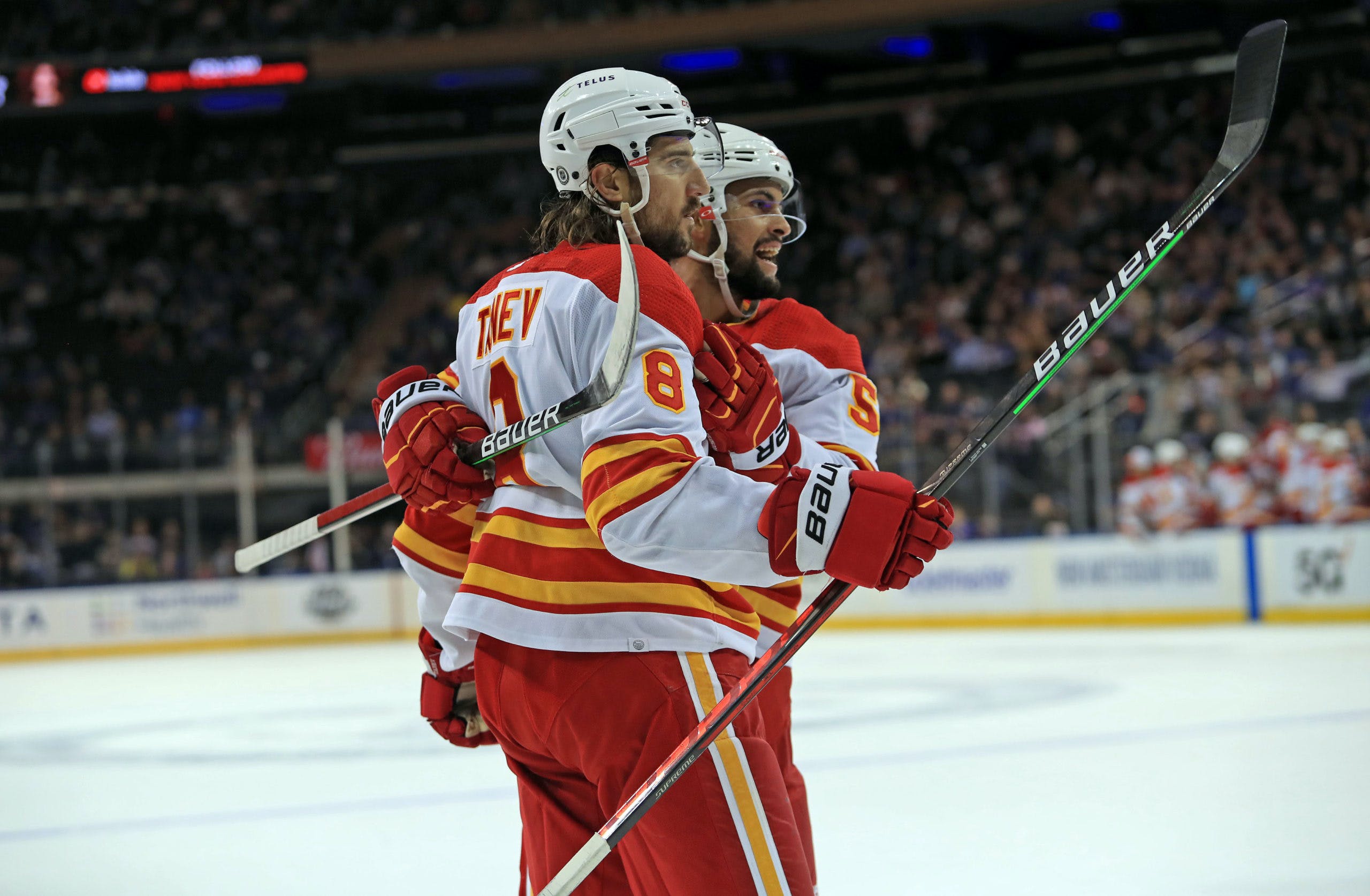 By Robert Munnich
5 months ago
The Calgary Flames head into next season with a loaded defence core. The addition of MacKenzie Weegar has improved the right side of the Flames blue line, giving the club three high-end, right-handed defensemen. This opens up a few possibilities for head coach Darryl Sutter on how he wants to configure his defense pairings.
What could those pairings look like?
For the sake of this exercise, let’s assume that the Flames will start opening night with Noah Hanifin, Rasmus Andersson, Chris Tanev, MacKenzie Weegar, Nikita Zadorov and Oliver Kylington as the six defensemen.
Right Shots: Weegar, Tanev, Andersson
Left Shots: Hanifin, Kylington, Zadorov.
Here are a couple options for what the Flames defence could look like to start the 2022-23 season.

Option 1: Load up the top four

The first option Darryl Sutter has is loading up his top two pairs.
First Pair: An interesting possibility for the Flames is putting Weegar and Tanev together as the de facto number one pairing. We all know what Tanev can do. He is one of the best defensive defencemen in the NHL. Pairing him with a high end, puck moving defenseman like Weegar has the makings of an elite pairing. One you could argue has the chance at being one of the best in the NHL. Weegar would play on the left side as he did the last two seasons in Florida on a pairing with Aaron Ekblad.
Both Tanev and Weegar have put up elite numbers over the past two seasons. Putting them together could be a nightmare for opposing players to match up against.
(League ranking among the 210 defencemen who have played over 800 minutes in the last two seasons courtesy of Natural Stat Trick.)
Second Pair: Hanifin and Andersson developed strong chemistry as a pairing last year. They essentially played the entire season together. According to Natural Stat Trick, at 5 on 5 Hanifin and Andersson outscored their opposition 66-46 and had an xGF% of 56.19%. There is no need to break up this pairing as they have established chemistry and results.
Third Pair: A third pairing of Zadorov and Kylington will have a risk reward element to their game. The reward could be this pair working well together as Zadorov could play a defensive, shut down role, which could open up opportunities for Kylington to join the rush and play a little offence, similar to how Kylington played with Tanev last season.
There is also a risk factor when putting these two players together. First, they are both left-handed. One of them will have to play their off side which is difficult to do. Tasks like picking the puck off the boards with your backhand and making breakout passes on your weak side are not easy things to do, even for NHL caliber defencemen. Kylington would likely play on the right as he has experience doing it and is a more skilled puck mover.
Secondly, both Zadorov and Kylington have a tendency to make the odd costly turnover with the puck. Having both those guys playing together, and with one on their off side, could potentially lead to some struggles defensively.
Overall, the top two pairs would get a ton of ice time at 5 on 5. Sutter would rely on them for big match-up minutes while sheltering Zadorov and Kylington.

Option 2: The Tampa model. Load up one side

I call this the “Tampa model” because over the last three seasons, Tampa Bay has loaded up the left side by putting their top three defensemen on different pairs. In this setup, Lightning Head Coach, Jon Cooper, was able to distribute ice time more evenly for their three defensive pairings. This also made sure that at least one of Victor Hedman, Mikhail Sergachev or Ryan McDonagh were on the ice at all times.
The Flames could have a similar set up with their three of their top defensemen, who are all right shots.
First Pair: In this configuration, Hanifin and Andersson would likely take on the role as the top unit.
Second Pair: Calgary could keep the Kylington and Tanev pairing together. They were one of the best duos at 5 on 5 in the NHL last season, outscoring their opposition 57-35 when they were on the ice together. They showed great chemistry and have proved they work well together.
Third Pair: A Zadorov-Weegar combination would be a luxury for Sutter. This is a pairing that could work well with one another as Zadorov plays a defense first game. Similar to Kylington, Weegar would be able to take more chances offensively and take advantage of that part of his game.
In this set up, Sutter could have one of Andersson, Tanev, or Weegar on the ice at all times at 5 on 5. This could give the Flames more balance where they wouldn’t have to rely so heavily on four players. It would also make sure that each defenseman is playing on their strong side, which NHL coaches love.
Overall, the Flames are in a good position when it comes to how they choose to distribute their defence pairings. This is arguably one of, if not the deepest group of defencemen Calgary has had to work with in the salary cap era. It’s going to be fascinating to see how Darryl Sutter utilizes the talent on his blue line.