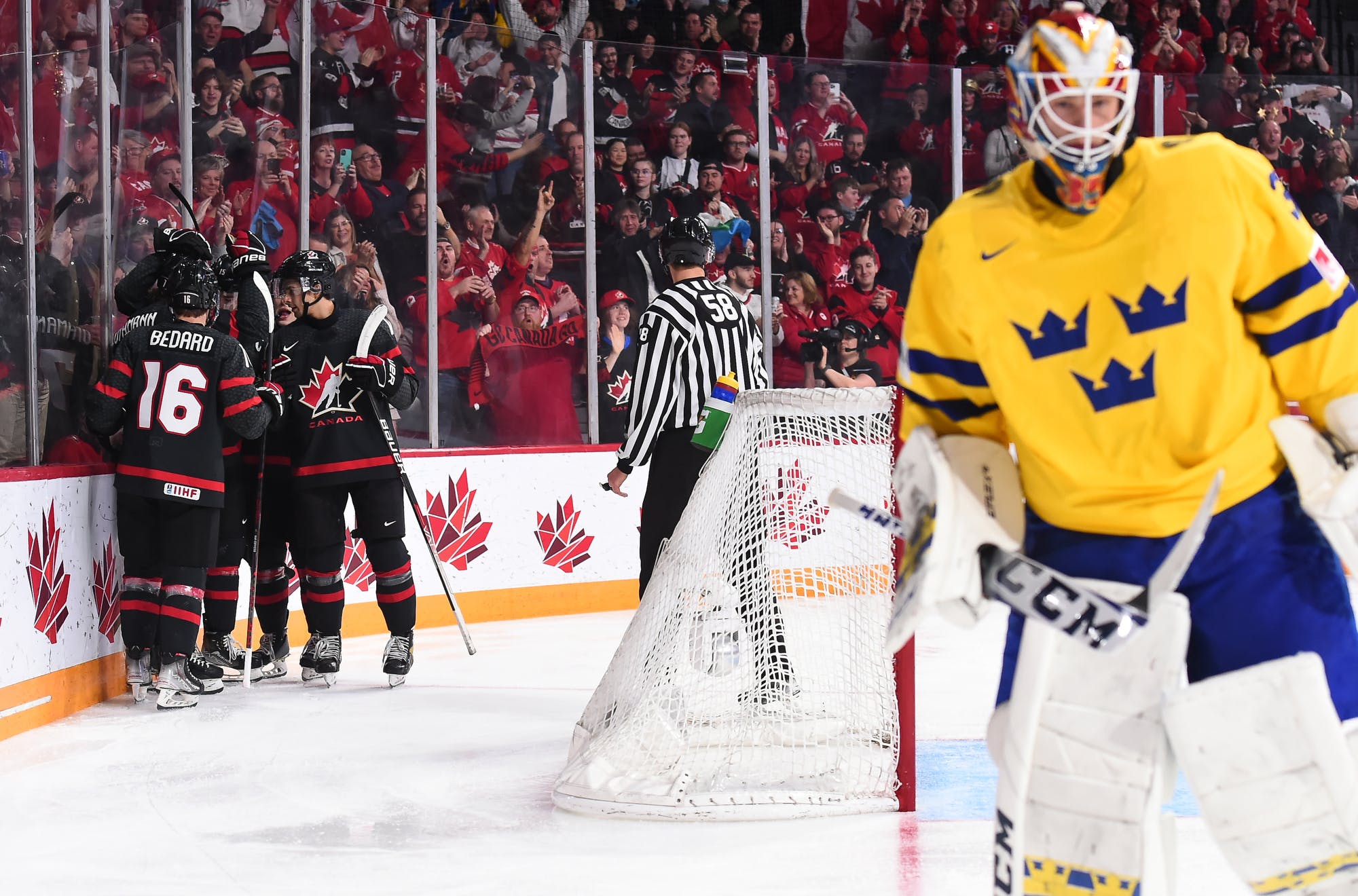 By Mike Gould
1 month ago
Let this sink in: Connor Bedard has more than twice as many points as anybody else at the 2023 IIHF World Junior Championship.
The 17-year-old phenom racked up four assists on Saturday as Team Canada defeated the Swedes by a 5–1 score to close out the group stage.
Bedard helped set up Joshua Roy (MTL), Brennan Othmann (NYR), Tyson Hinds (ANA), and Kevin Korchinski (CHI) for goals in the blowout victory. Canada outshot Sweden 44–23 in the contest.
It’s staggering to look at Bedard’s statistics at this tournament, especially considering he was held to just one assist in the opening game against the Czechs. The North Vancouver product has 18 points in four games. That’s not a typo. Nobody else has more than eight.
Bedard tied Eric Lindros’ all-time Canadian World Junior record with his 31st career point in the third period against Sweden. The Philadelphia Flyers great shared an encouraging message for Bedard on Twitter, telling the projected 2023 No. 1 pick to “smash” his record.
Lindros was famously once traded for Peter Forsberg, who still holds the record with 31 points in a single World Junior tournament (set in seven games back in 1993). Bedard is currently on pace for 32 points in this year’s World Juniors. Could he possibly best Forsberg’s mark? We’ll have to wait and see.
Canada did suffer one loss on Saturday: Colton Dach (CHI) suffered an arm injury early in the third period against Sweden and will not return for the remainder of the tournament. Hockey Canada announced Saturday that Owen Beck (MTL) will replace Dach on its World Junior roster.
Neither Calgary Flames prospect participating at the World Juniors made much of an impact on Saturday. William Stromgren didn’t see the ice once in the Swedes’ loss to Canada; Topi Ronni logged just 4:35 in the Finns’ 6–2 setback to Team USA and still has yet to record even a single shot at the tournament.
Day 6 Results
Team Switzerland 4 vs. Team Slovakia 3 (SO)
Team Czechia 8 vs. Team Germany 1
Team USA 6 vs. Team Finland 2
Team Canada 5 vs. Team Sweden 1
January 2 Games
Quarterfinals
Team Finland vs. Team Sweden
Team Czechia vs. Team Switzerland
Team USA vs. Team Germany
Team Canada vs. Team Slovakia
Relegation
Team Latvia vs. Team Austria
News
Recent articles from Mike Gould