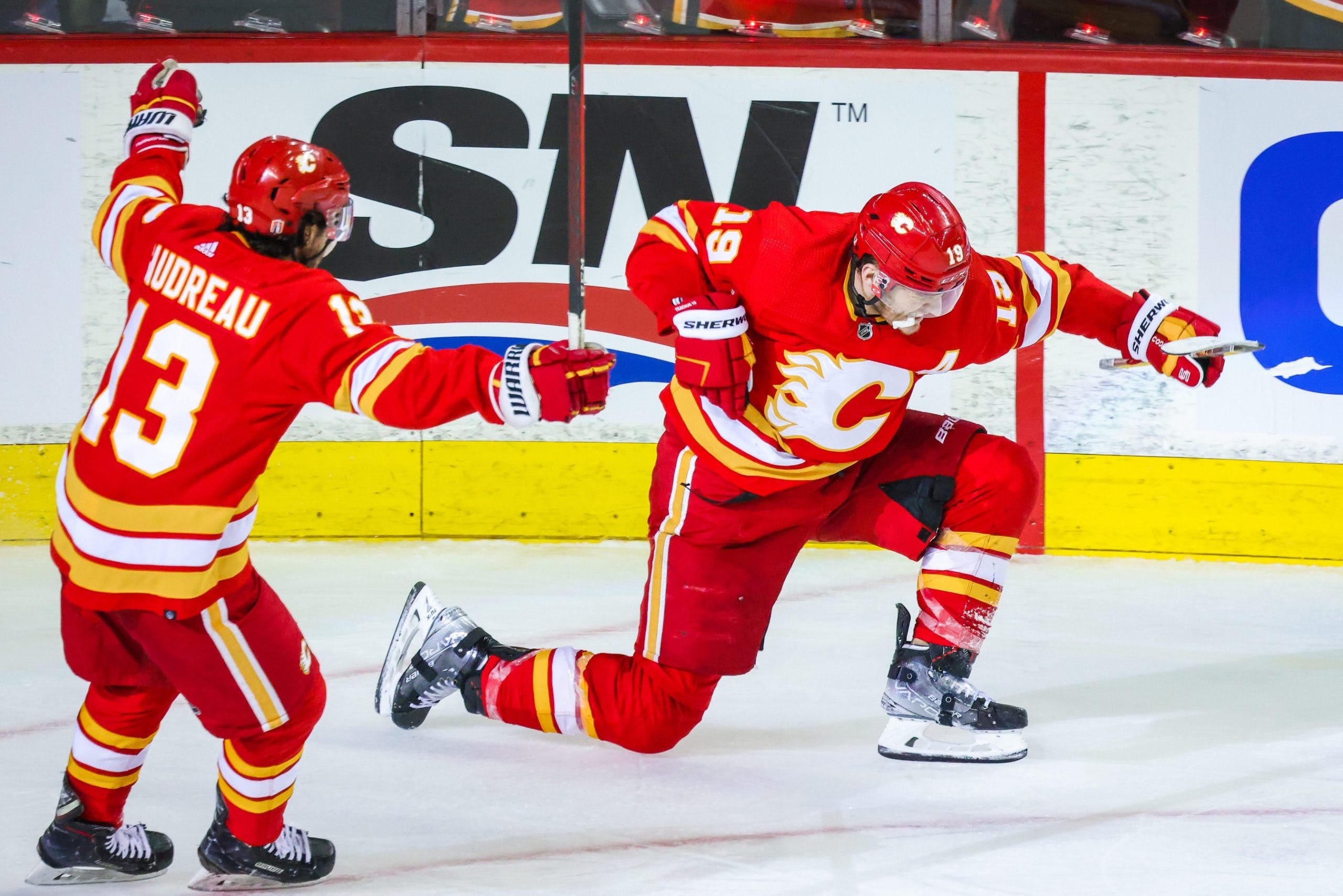 Photo credit: Sergei Belski-USA TODAY Sports
By Ryan Pike
8 months ago
Comments
A lot happened in the first game of the second round series between the Calgary Flames and Edmonton Oilers on Wednesday night. The Flames scored on their first two shots of the game, blew two four goal leads, and won anyway by a 9-6 score in an eventful offensive display. They took a 1-0 lead in their series, but weren’t terribly happy with their performance in doing so.
The recap is here, if you missed it. Here are selected highlights and post-game comments from Wednesday night.

Welcome to the Battle of Alberta, everyone. #StanleyCup | #BattleofAlberta pic.twitter.com/qlrEakdha7

connor mcdavid finds evan bouchard who makes it a 5-2 game. zack kassian gets called for roughing after the whistle. pic.twitter.com/gdLDLqyJMP

YES, WE HAD A TIE GAME! 🍠#StanleyCup | #BattleofAlberta | #LetsGoOilers pic.twitter.com/iNeqrAvifZ

Matt Tkachuk chirps Evander Kane about his bankruptcy. "You want some money?" pic.twitter.com/IMOjyzaziO

Keith Tkachuk was not letting go of his hat…even if it was his son who just scored a hat trick! 🤣#StanleyCup | #BattleofAlberta pic.twitter.com/ZTLXZUWmby

"We were told that it was a boring series last time so I told the players yesterday we've got to score 7 to 10 goals today, knowing full well that they'd probably score 5 to 8, and then we could win. So that's what we did."

Darryl checks in after Game 1. pic.twitter.com/MVzgErMD0i

On the wild game: “Missed the convert.”
On what he wants his team to take away from the game: “Play better than we did tonight.”
Musing about the game’s flow: “It was a strange game. We scored on our first few shots. There was probably six different games out there.”
On the number of goals in the game compared to the prior series: “We were told that it was a boring series last time, so I told the players yesterday we’ve got to score 7-10 goals today, knowing full well that they’d probably score 5-8 and then we could win. So that’s what we did.”
Advertisement
Ad
Advertisement
Ad
Matthew Tkachuk

"There's a lot to take away from this game."

Hear from Matthew Tkachuk and Blake Coleman after Game 1. pic.twitter.com/D0EmOewMRa

Summing up the game: “Not good. Not good at all. That was probably our worst game of the playoffs so far. We got super lucky. That’s just not the recipe for success. Maybe we win this one, but we’re not going to win many more if we’re going to play like that. I thought we had a great start. Second period really got away from us. And then I think once we got a lead in the third we played a little bit better. But we’ve got to be better with leads. We had a four goal lead twice. That should be enough in playoffs. We’ll be better next game.”
On his father not throwing his hat on the ice after his hat trick: “Probably loved his hat. I don’t know. Probably thinks it’s good luck. I’m totally okay with that, definitely.”
Advertisement
Ad
Advertisement
Ad
On bouncing back after the Oilers tied the game: “We played probably the worst… 15-20 minutes of hockey we probably have all year, definitely in the playoffs, and it was still a tie game. It wasn’t the end of the world. You’ve still go to go out there, you can’t roll over and let them win. So, it was big to get that seventh goal from Raz, and it just kinda went from there.”
Rasmus Andersson

"It's not the way we should play and are going to play, going forward."

Rasmus Andersson talks about Game 1 vs. the Oilers. pic.twitter.com/UoYIdA3iJV

On the high-scoring game: “Sure, we scored a lot of goals tonight, but our defensive play needs to be way better. You’re not going to win many games when you give up six goals, that’s for sure.”