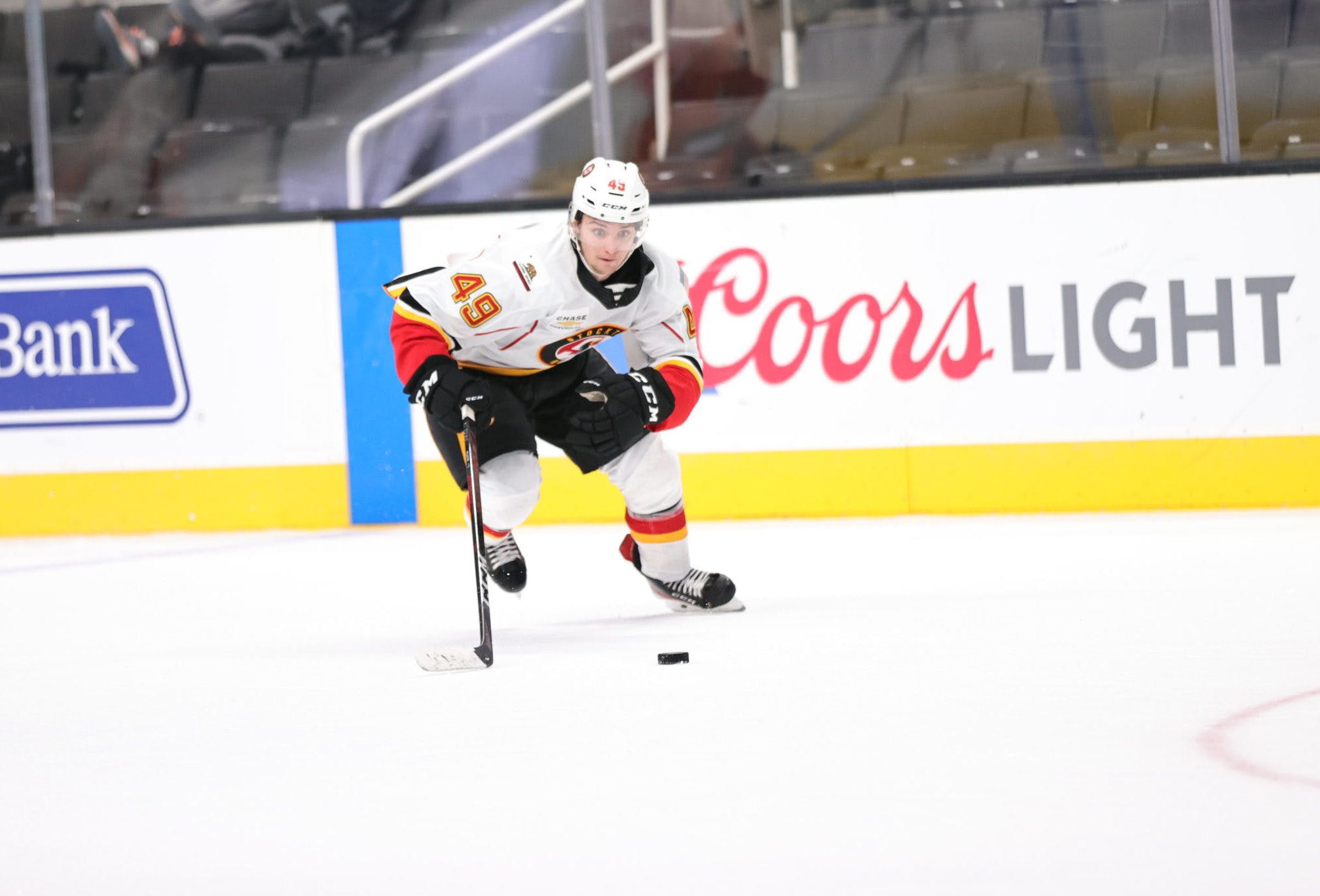 Photo credit: Provided by the Stockton Heat
By Ryan Pike
4 months ago
Comments
On Friday night, the Calgary Flames played their first game at Penticton’s Young Stars Classic. Despite playing fairly well at times, the Flames lost 3-0 to the Vancouver Canucks. But life’s full of second chances, and so the Flames will get another chance for a win over a divisional rival on Saturday night when they play the Edmonton Oilers prospects. Can the Flames find redemption in a Young Stars edition of the Battle of Alberta?
The puck drops shortly after 8:30 p.m. MT and you can catch the action streamed live on the Flames’ website and hear the action on Sportsnet 960 The Fan!

Projected lines from the Flames site:
@Jakob Pelletier – @Cole Schwindt – @Adam Klapka
@Emilio Pettersen – @Connor Zary – @Walker Duehr
@Jack Beck – @Rory Kerins – @Lucas Ciona
@Cole Huckins/@Lucas Feuk – @Ilya Nikolaev – @Evan Boucher/@Cooper Walker
@Ilya Solovyov – @Jeremie Poirier
@Yan Kuznetsov – @Rhett Rhinehart
@Jake Lee – @Cole Jordan
@Simon Lavigne – @Christoffer Sedoff
@Dustin Wolf started in net, with @Daniil Chechelev dressed as backup. The extras on Friday night, not dressing against Vancouver, were @Brad Arvanitis, @Parker Bell, @Evan Boucher, @Cooper Walker, @Jake Lee, @Rhett Rhinehart and @Cameron Whynot. We’ll see which players rotate in given the Flames are playing on consecutive nights.
Advertisement
Ad
Advertisement
Ad
The Flames had a good first period and then gradually faded against the Canucks, the result of a slew of penalties that seemed to sap their momentum. But before things went off the rails, they did a nice job controlling play and managing the puck – doing everything except scoring. Unfortunately, it’s hard to win games when you don’t score goals.
Player to watch: Adam Klapka stood out against Vancouver, both for his humongous stature and for his presence in front of the Canucks net. If he can find a bit more poise with the puck, he could be a tough customer for other teams to deal with.

Here’s how the Oilers lined up against Winnipeg on Friday:
@Dylan Holloway – @James Hamblin – @Xavier Bourgault
@Matvei Petrov – @Noah Philip – @Tyler Tullio
@Reid Schaefer – @Filip Engarås – @Carter Savoie
@Dino Kambeitz – @Cole Dubinsky – @Jake Chiasson
Advertisement
Ad
Advertisement
Ad
@Philip Broberg – @Maximus Wanner
@Noah Dorey – @Michael Kesselring
@Darien Kielb – @Phil Kemp
@Ryan Fanti played in net for Edmonton, backed up by @Jan Spunar. Their extras were @Olivier Rodrigue, @Jeremy Hanzel, @Charlie Wright, @Luca Hauf and @Ty Nash. (We’ll see what adjustments they make for this evening.)
The Oilers prospects beat Winnipeg 3-2 on Friday night, just before the Calgary/Vancouver game, with Darien Kielb, Michael Kesselring and James Hamblin scoring for Edmonton. The Oilers have an interesting mix of past first-rounders and depth players destined for Bakersfield, and it worked fairly well against Winnipeg. The Flames will need to be more composed to get a better result than they got against Vancouver.
Player to watch: Philip Broberg is an NHL-sized blueliner who’s dipped his toe into the water at that level. He could be able to dive right in with a strong training camp.
Advertisement
Ad
Advertisement
Ad
Stay tuned to FlamesNation for a full post-game breakdown of each Calgary Flames game at the 2022 Young Stars Classic!