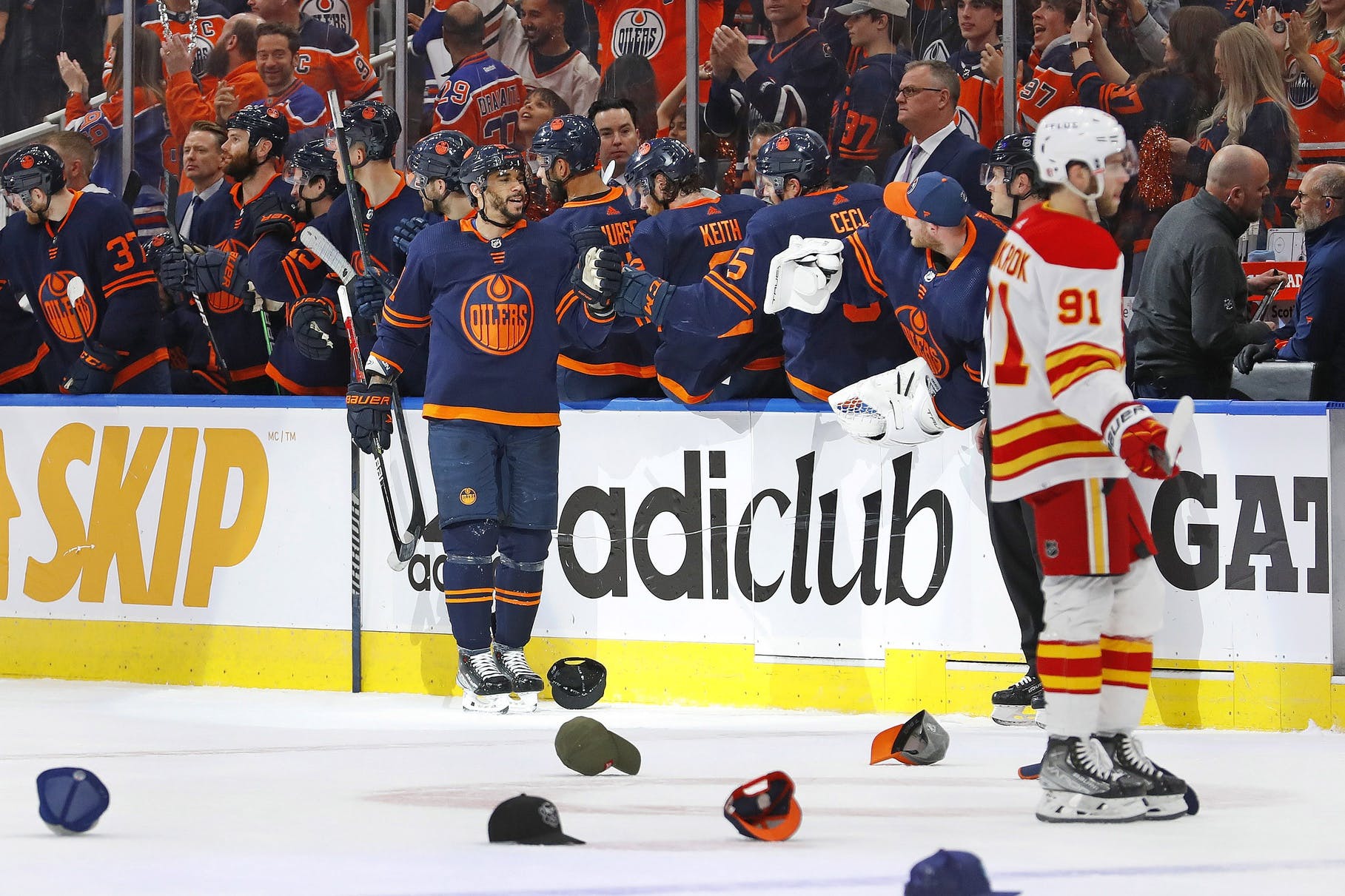 Photo credit: Perry Nelson-USA TODAY Sports
By Ryan Pike
8 months ago
Comments
The Battle of Alberta shifted to Edmonton for Game 3, with Rogers Place hosting the festivities. The Calgary Flames were decidedly the second-best team on the ice, getting decisively out-played for the balance of this game. The Flames were not particularly good and made a series of costly mistakes en route to a 4-1 loss to the Oilers.
The Oilers lead this best-of-seven series 2-1.

The Oilers were all over the Flames in the first period, but the Flames got timely saves from Jacob Markstrom.
A Brett Kulak slapshot squirted through Markstrom, hit the post and stayed out. Nikita Zadorov cleared it out of the crease to keep it tied at 0-0.

Late in the period, Connor McDavid chased after Noah Hanifin, stole the puck via a stick lift, and generated a great scoring chance.

Shots were 21-7 Oilers (12-6 Oilers at five-on-five) and scoring chances were 9-6 Oilers in the first period. (High-danger chances were 5-3 Oilers.)
The Flames took a penalty late in the first period that carried over into the second. Just after the Flames’ penalty expired, the Oilers scored off the rush. Connor McDavid entered the Flames zone with speed, passed to Leon Draisaitl, who passed to Zach Hyman. Hyman’s shot beat Markstrom just inside the far post to give the Oilers a 1-0 lead. (The Flames players got bunched up in their own end after Edmonton’s zone entry, which gave them the space to make those quick passes.)
Advertisement
Ad
Advertisement
Ad

A ZACH ATTACK FOR THE LEAD! 💥#StanleyCup | #BattleofAlberta | #LetsGoOilers pic.twitter.com/7FOtbJIwMh

The wheels fell off for the Flames in the middle of the period and Edmonton feasted.
Blake Coleman and Andrew Mangiapane entered on a two-on-two rush. Coleman made a pass back to Trevor Lewis, who skated to the bench and didn’t really seem to notice the pass. That allowed the Oilers to grab the errant puck and head back the other way. Evander Kane and Leon Draisaitl executed a give-and-go, ending with Kane putting the puck past Markstrom to make it 2-0.

The @EdmontonOilers have scored the last six goals in the series. 👀#StanleyCup | #BattleofAlberta | #LetsGoOilers pic.twitter.com/JJzCGqH6qe

The Flames top line tried to get a cycle going in the Oilers zone on the next shift, but the Oilers intercepted a pass behind their own net and went off to the races. This time off the odd-man rush, McDavid set up Kane for a tap-in to make it 3-0. (The second and third Oilers goals were scored 53 seconds apart.)
Advertisement
Ad
Advertisement
Ad

And Kane completed the natural hat trick about six minutes later, as a scoring chance in the Oilers zone ricocheted off an Oilers player and bounced into the neutral zone. Oliver Kylington was left all alone defending a two-on-one against McDavid and Kane. It went poorly, and Kane got a tap-in to make it 4-0. (Rasmus Andersson was caught up ice.)

Shots were 13-12 Oilers (11-10 Oilers at five-on-five) and scoring chances were 9-7 Oilers in the second period. (High-danger chances were 5-2 Oilers.)
The Flames turned to backup netminder Daniel Vladar in the third period. The period was fairly quiet, with the Oilers defending well and seemingly content to kill the clock.
Well, it was quiet until Milan Lucic crashed into Mike Smith behind the Oilers net. A crowd formed, Lucic was given a major and a game misconduct for charging, and Smith left the game briefly (in favour of Mikko Koskinen) due to the concussion spotters pulling him for evaluation.
Advertisement
Ad
Advertisement
Ad

After review, Lucic gets a major penalty for charging + game misconduct. pic.twitter.com/elp3TxbohF

Kylington scored late in the third period to spoil Smith’s shutout bid and make it a 4-1 hockey game.

But that was all the offense the Flames could muster in this one. Shots were 13-7 Flames (8-3 Flames at five-on-five) and scoring chances were 10-4 Flames in the third period.

The Flames were the second-best team on the ice.
If you want to point your finger at one particular thing, it’s this: when they got down 1-0, they seemed to over-commit to their offensive zone pressure – Mark Giordano used to phrase this tendency as if the team was trying to score several goals at once rather than remain patient when they got down in games – and it made them really vulnerable to those odd-man rushes the other way. The fact that it happened three times in one period is pretty inexcusable, though.
Advertisement
Ad
Advertisement
Ad

He allowed four goals, but Markstrom was superb for two periods and the only reason this game was remotely close for as long as it was.

The Oilers scored twice in 53 seconds in the second period, bumping their lead from 1-0 to 3-0. That was the game right there.

These two teams will do it all again at Rogers Place on Tuesday night for Game 4. It’s a 7:30 p.m. MT start time.
The Oilers lead this best-of-seven series 2-1.