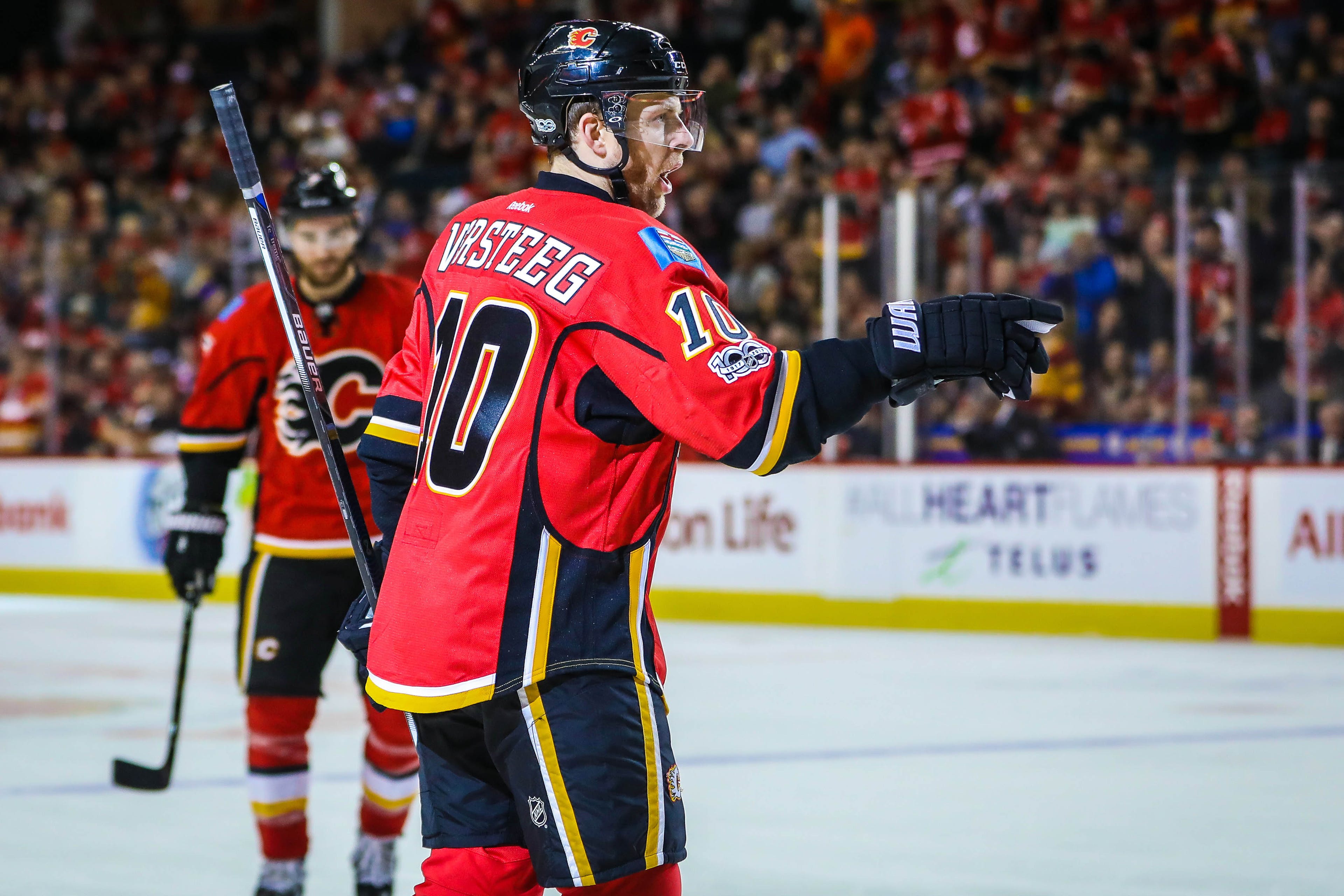 When it was announced that Kris Versteeg was re-signing with the Flames last summer, it was a joyous occasion for many, but Versteeg himself might have been the happiest. Buying into the Flames’ vision, Versteeg confessed his re-ignited love for the game, and also upheld his family values, making his decision to return an easy one.

However, his season was cut short, as Versteeg was kept on the sidelines to recover from a hip surgery.

Versteeg’s on-ice presence was sorely missed after it was announced that he was out month-to-month. While it’s hard to say how the Flames’ powerplay might have performed differently had Versteeg been available, it’s abundantly clear that the 29th-ranked man advantage could have used his skillset.

In the games that he did play, he made the powerplay more dangerous. He was heavily relied on as a part of the first unit, and put up a powerplay scoring rate of 4.09 P/60. This trailed only Johnny Gaudreau, Matthew Tkachuk, and Sean Monahan among powerplay regulars.

Further, the Flames struggled with games that went to a shootout. The team went 2-5 this season after going 4-2 in 2016-17. Shootouts are always tossups, but most of their shootout losses were due to leaky goaltending this season. Perhaps with Versteeg’s shootout prowess, the Flames could have instead outscored their opponents and picked up a few more points along the way.

This was the first season since 2010-11 (excluding the 2012-13 lockout season) that Versteeg was held under 60 games. He had a close call after taking a slapshot to the head, but it was his hip labrum injury that ultimately kept him out.

After missing 49 games, he made his return in hopes of helping out the Flames in their playoff push. However, he was quickly shut down for the season after the Flames saw their playoff chances fall off a cliff. There was little reason to continue to play Versteeg any further as he was rushed back from a major surgery.

Early in the season, Versteeg spent most of his time playing alongside Troy Brouwer, Sam Bennett, Curtis Lazar, Matt Stajan and Jaromir Jagr. Out of these linemates, Versteeg and Jagr were the most potent together, putting up a 54.10 5v5 CF%. The rest of these players did not help him out much as their CF% were all in the red, and Versteeg often had better results away from them.

Off the ice, Versteeg’s biggest contribution this year was his rink-side commentary during the Flames’ Super Skills competition.

If there was a chirping competition at Super Skills, Steeger would win it, hands down. No question.

#10 was mic'd up during today's events and we have to say, it's a must-watch. pic.twitter.com/tS9y6ru4j9

With Versteeg being injured for most of the season, evaluating his performance is affected by the small sample size. The 2017-18 season started off slowly for him, but it could have been due to the constant third line shuffling that occurred.

His lack of 5v5 production from last season carried over and was actually twice as low. He scored 1.50 P/60 last year compared to 0.74 P/60 this time around. His shooting percentage also took a sizeable hit, dropping from 11% (coincidentally also his career average) to 6.1%, affecting both his even strength and powerplay scoring.

However, when on the powerplay, Versteeg was still contributing at a similar rate as last season, albeit scoring fewer goals in exchange for more assists. He had one goal and four assists in 2017-18, compared to 2016-17 where he had eight powerplay goals and assists each.

While his numbers were underwhelming prior to his injury, it wouldn’t be surprising if the Flames kept Versteeg around for at least another year. Versteeg can continue to contribute in a top nine role and provide some much needed value to the powerplay.

If he can make a full recovery in time for the start of training camp, he could possibly skate more frequently with Jankowski and Andrew Mangiapane, among others. Either way, it’d be a welcome change from Versteeg’s far too consistent usage with Brouwer.

A lot of what’s to come for Versteeg really does depend on his recovery. If all goes well, another season with the Flames should be fortuitous for both parties.