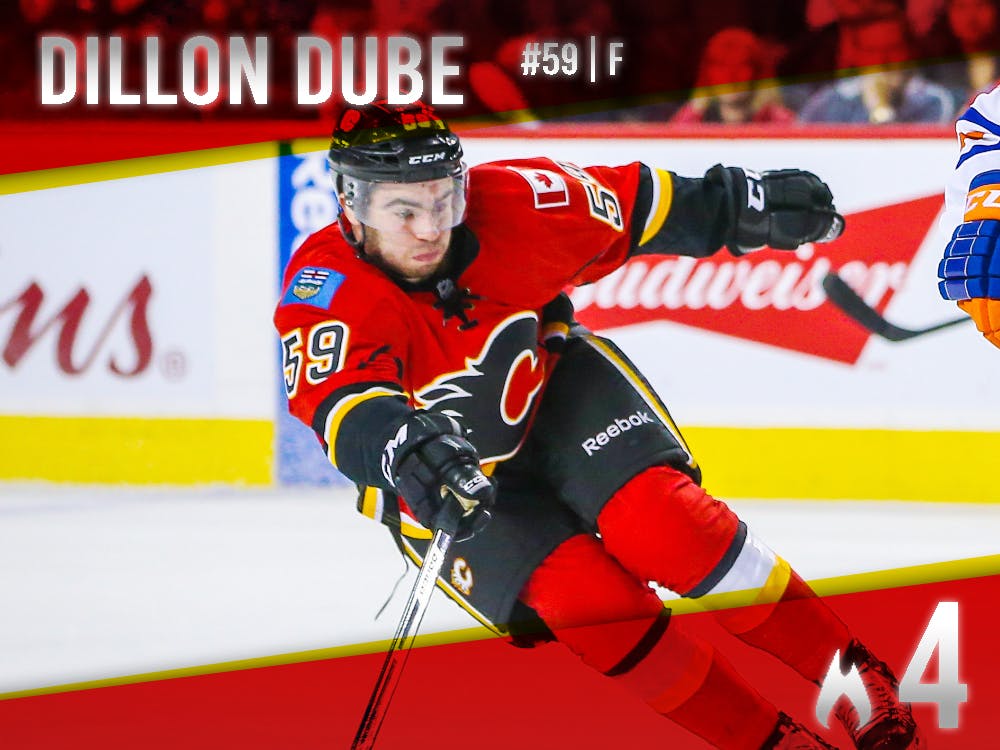 The Calgary Flames don’t have a rich history of drafting, especially after the first round, but recently they’ve made several high ceiling picks, including Dillon Dube in 2016. An unassuming, sub-6′ forward out of Kelowna in the WHL, Dube has quickly risen to the top of the Flames’ prospect depth chart after an impressive junior career, capped with a gold medal captaining Canada’s team at the World Junior Championship.

Last year, Dube was one of the last cuts at training camp and surprised many with his solid play alongside Tanner Glass and Ryan Lomberg in the preseason. With another successful WHL season under his belt and a handful of AHL games, this could be the year for Dube to push for a full time spot with the Flames. He jumps from #8 in last year’s rankings to #4 this year.

How did we get here?

All Dube has done throughout his hockey career is win. His trophy cabinet, conveniently located in his childhood home in Cochrane, holds a vast collection of awards and accolades.

He began his junior hockey career in 2013 when he was selected in the first round of the WHL bantam draft by the Kelowna Rockets. In his rookie year, he scored 27 points over 45 games, and 11 in 18 playoff games en route to a Memorial Cup championship. In his draft year, he upped his scoring to just over a point per game clip with 66 points in 65 games. This was good for 44th in WHL scoring , but his rapid scoring progression and solid two-way play for the Rockets prompted the Flames to draft him 56th overall in 2016.

At this point, Dube was a highly touted prospect and considered a potential steal for the Flames in the second round. Unfortunately, his 2016-17 season began with a lower body injury that kept him out for the first two months of the Rockets’ season. Still, he remained on Hockey Canada’s radar and was invited to Canada’s WJC camp. It surprised some that Dube was selected to represent Canada at the 2016 World Juniors, but despite playing a bottom six role on a very good Canadian team, he was an impactful player and won a silver medal in his first major international tournament. In the WHL, Dube was first on the team in points per game with 55 over 40 games.

Last year, Dube exploded for 84 points in 53 games for Kelowna, good for ninth overall in points per game. Internationally, Dube was again selected to represent Canada at the WJC, this time as captain. He guided Canada to a gold medal and was one of the team’s most dominant players throughout the tournament. After Kelowna was eliminated in the WHL playoffs by the Tri-City Americans and fellow Flames prospect Juuso Valimaki, Dube played six games for the Stockton Heat.

Dube finished his WHL career with 232 points in 203 games.

Stats, numbers, and everything therein

The 2017-18 season was Dube’s third full campaign in the WHL. He was second in scoring for the Rockets. He also played for Canada at the WJC on the international stage, as well as for Stockton at the end of the AHL season.

In his first taste of pro hockey, Dube was excellent in his six games for the Heat, albeit in a limited role. He adapted to the faster pace of the AHL at a time when the Heat were fighting for a spot in the Calder Cup playoffs and seemed comfortable playing against older, more experienced players.

Those in the know

Dube has always been a great two-way center and this year the offensive side of his game blew up. Despite only playing in 53 games with the Kelowna Rockets, he set career highs in goals (38), assists (46), and points (84). He manned the top line for the Rockets and was part of Canada’s gold medal-winning World Junior team this January. The season ended with him a plus-17 and he was solid at the dot, winning 54% of the faceoffs he took.

Larry Fisher, who covers the Rockets for the Kelowna Daily Courier and The Hockey Writers WHL, commented on Dube’s skillset:

Dube’s smooth skating remains his biggest strength, along with his hockey sense, but his shot — both in terms of accuracy and release — is also becoming NHL calibre. He’s going to be a solid pro for Calgary thanks to his versatility as a 200-foot player and his ability to play up and down the depth chart, on any of the four lines as either a centre or a winger.

If there is a knock on Dube coming out of junior, it’s that he can be a bit too individualistic at times and needs to better utilize his teammates, but that should be a natural progression in the AHL and/or the NHL.

The 2018-19 season should be the most exciting in Dube’s career to date. He was only drafted two years ago, but has a legitimate shot at making the NHL. With the Flames buying out Troy Brouwer and not retaining Matt Stajan, there is a spot open for Dube in Calgary’s bottom six. He was impressive in training camp last year and if he can take another step forward, he might force Brad Treliving to keep him around a bit longer this year.

That being said, he’ll be competing with players like Andrew Mangiapane, Austin Czarnik, and Spencer Foo for that NHL job, so he does have his work cut out for him. With Dube’s work ethic and commitment to getting better each year, it is very possible that he edges out these players and at least earns himself his NHL debut.

More likely, however, is that Dube spends the 2018-19 campaign in the AHL with Stockton. He might get a few games in the NHL via call-ups but the Flames probably want him to hone his skills in the minors and become comfortable with the professional game. Dube doesn’t require waivers so the Flames likely stash him in the AHL unless he absolutely knocks down the door.

Dube might not be penciled into the NHL roster just yet, but he sure looks like he has the tools to be a solid contributor at the highest level. He is very much in control of his own destiny and his name is definitely one to watch out for in training camp and the preseason.