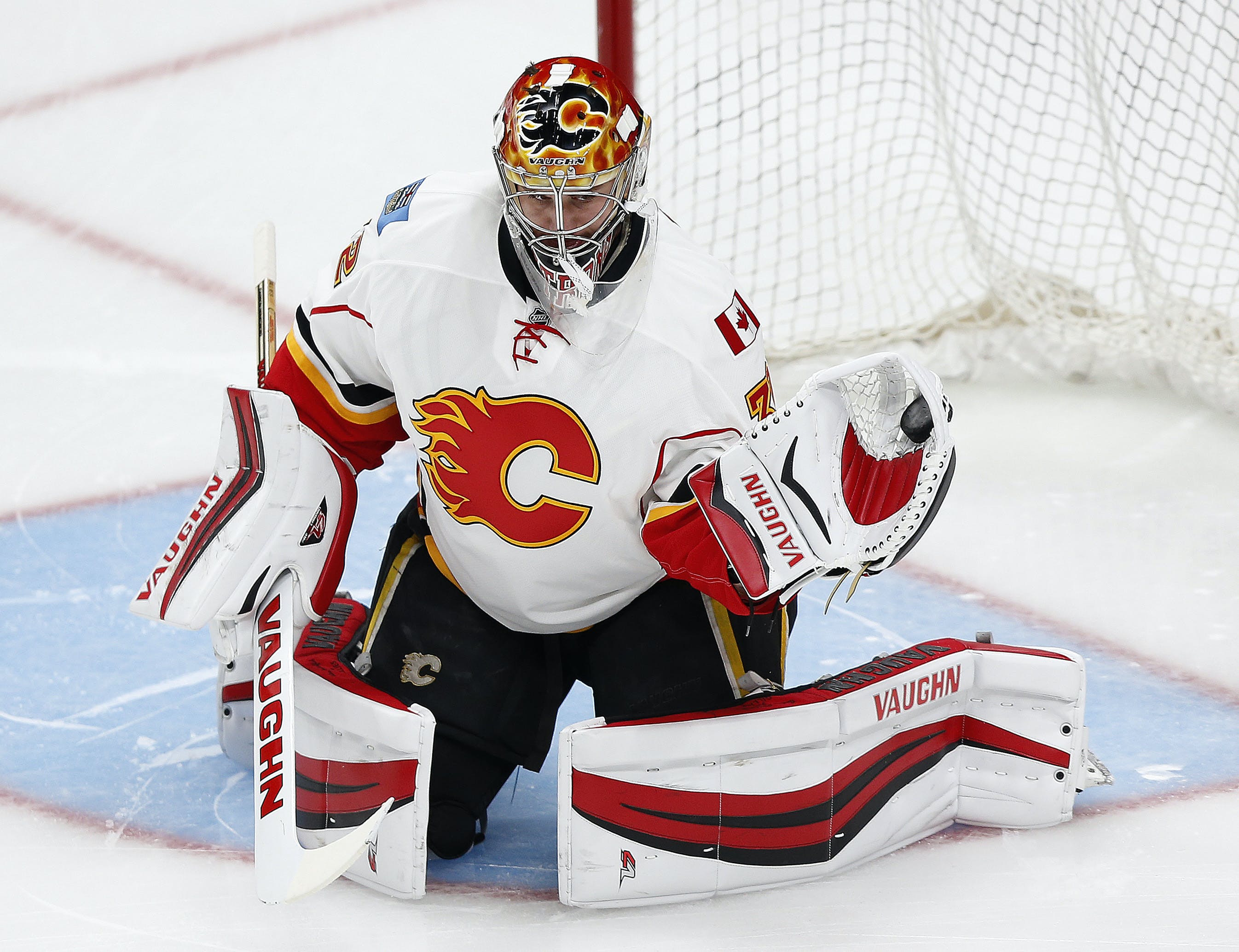 Coming out of college, Jon Gillies looked like the Calgary Flames’ next homegrown starting goaltender. Unfortunately the 23-year-old has run into a series of obstacles at the pro level, to the degree that his status as a premier prospect has dimmed considerably since this time last year.

Dropping from third to 11th in our rankings, Gillies remains a player of interest in Calgary’s system, but he’s no longer the obvious heir apparent in the crease.

A third round pick in 2012 coming out of the USHL, the towering 6’6″ netminder immediately grabbed the starter’s reins for Providence College, despite being an 18-year-old freshman. Gillies finished the season as one of the best goalies in the league, managing a .931 SV% while being named to the Hockey East first all-star team.

The next two years in college were similarly successful. His save rate was eerily stable (.931, .931, .930), he was named to the 2014 USA World Junior Team, he led the Friars to an NCAA title, and he was chosen as the Frozen Four’s most outstanding player.

His impressive resume marked Gillies as a highly anticipated prospect when he turned pro in 2015. Unfortunately, his first pro season was cut to just seven games by a lingering hip ailment that required surgery. His highly anticipated debut was put on pause.

Gillies re-started his debut this past season but struggled under the weight of expectations after a year on the shelf. He duelled with newcomer David Rittich for the starter’s role in Stockton, eventually ceding the crease for long stretches. Gillies finished the year with a mediocre .910 SV% in the AHL (22nd best in the league), although he did impress in his first NHL game where he made 27 saves en route to a win over the L.A. Kings.

Stockton Heat head coach Ryan Huska noted that Gillies’ injury-free season did carry with it a new challenge: dealing with being a full-time pro and having to compete for starts with teammate David Rittich.

He had to deal with some challenges for the first time, and really this was his first professional year. So learning how to be a pro was one thing that was a big step for him. Learning how he has to come to the rink with the right attitude and ready to make himself better each and every time he steps onto the ice, whether that be games or practices, and handling some adversity.

In years past Jon was always the guy that was going to get the net all the time and learning and having to deal with a guy that was pushing him really hard from behind, I think, gave him great experience. I think it’s going to put him in a position where he’s going to come back even better than we saw this year where now the injury’s fully behind him. He’s got a year under his belt and we’re going to see him take some really good strides moving forward.

At 6-foot-5, he is an intimidating physical presence in the net. He plays into his size well by using short, efficient routes in the crease. He also likes to pre-set on the post early, but is still able to get across quickly simply because of his long legs and powerful pushes while in the butterfly. His skating and overall footwork from a standing position was an area that he needed to improve when he was drafted. Despite missing a big chunk of time with injuries since turning pro, he certainly has improved in that regard. He’s right on the cusp of breaking through as a full-time NHL goaltender, and is one of the most exciting young goaltenders to keep an eye on this upcoming season.

The Flames desperately need one of their goaltending prospects to figure things out over the next couple of years, and by all rights Gillies should be at the head of the line. His mediocre first season will be quickly forgotten if he can re-establish himself as the true starter in Stockton and one of the top goaltenders in the AHL.

On the other hand, Gillies is now battling for organizational space with guys like Rittich and upstart Tyler Parsons. Another underwhelming year may see him passed on the depth chart and dropped further in our prospect rankings.