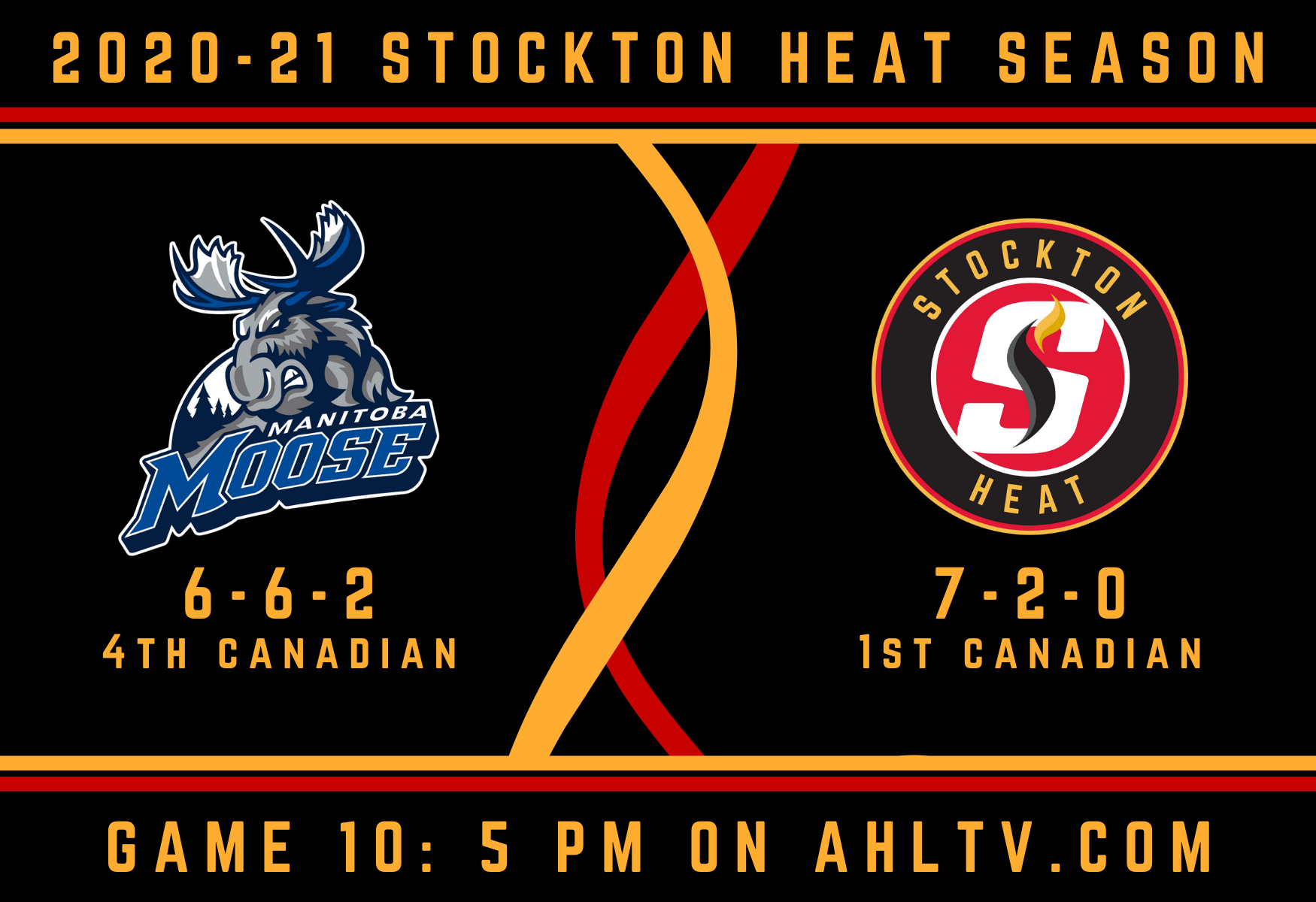 Photo credit: Graphic by Mike Gould
By Mike Gould
1 year ago
Comments
On Thursday evening, the Stockton Heat will take on the Manitoba Moose—this time, with the goal of becoming « les Stockton Huit. »
Stockton will look to extend its winning streak to huit—er, eight—games in Thursday’s contest, which will serve as the second part of a back-to-back for both teams and the third of four consecutive meetings between the Moose and Heat.
Thursday’s match-up will represent the first time this season the Heat will have gone without Connor Zary. The Flames have assigned their 2020 first round pick to the Kamloops Blazers, allowing him to complete the quarantine process and join the team before its season-opener on Mar. 26.
The Moose are coming off overtime losses to the Heat on Monday and Wednesday, with Glenn Gawdin and Matthew Phillips serving as the heroes to this point at Winnipeg’s BellMTS Iceplex.
Halfway through this scheduled four-game series between Stockton and Manitoba, the home side is still searching for its first victory but has managed to take two points out of the first two games.
Advertisement
Ad
Advertisement
Ad
Meanwhile, the Heat have yet to lose on the road this season (5-0-0) and boast five players currently scoring at or better than a point-per-game pace. Phillips and Adam Ruzicka both have 13 points in nine games to lead the Heat; Alex Petrovic, Emilio Pettersen, and Martin Pospisil round out the quintet.
Heat goaltender Artyom Zagidulin has started both games in Manitoba thus far but, with the back-to-back situation, it looks likely the team will opt to return to Garret Sparks for Thursday’s game. In five games this season, Sparks has a 3-1-0 record to go along with a .916 save percentage.
Conversely, Mikhail Berdin has started all but one of Manitoba’s games this season. The 23-year-old netminder owns a 6-5-2 record and a .909 save percentage. His backup has been Arturs Silovs, a 19-year-old Canucks prospect on loan to the Moose. Silovs lost his only start this season but allowed just two goals on 23 shots.
Advertisement
Ad
Advertisement
Ad
Emilio Pettersen got things started for the Heat on Wednesday, scoring the opening goal and setting up Phillips’ game-tying effort. The Norwegian rookie earned a promotion to the team’s top line in the third period and, with Connor Zary returned to the Western Hockey League, it could be a permanent change.
The Heat will need Pettersen, Phillips, Ruzicka, and the rest of the team to put a good foot forward on Thursday to have a good chance at securing its eighth win in as many games.

Stockton — Alex Petrovic. The wily vet has been used by the Heat coaching staff in all situations this year, including big minutes on the power play. Petrovic has responded by playing some of the most productive hockey of his career, pushing past a point-per-game pace and into contention for the team’s scoring crown. The 29-year-old defenseman recorded 20 points in 54 AHL games with the Providence Bruins last year but is already over halfway to that total in just nine contests this year. His pairing with Connor Mackey serves as the team’s top unit and has earned praise from head coach Cail MacLean.
Advertisement
Ad
Advertisement
Ad
Manitoba — CJ Suess. The 26-year-old winger was Mackey’s teammate on the 2017-18 Minnesota State Mavericks NCAA team. Suess turned professional with the Jets’ organization the following year and has improved steadily with each passing season, finally becoming a solid contributor over a full season in 2019-20. He scored 14 goals and 27 points in 57 games and looks to be bettering that pace in 2020-21, having posted seven points (three goals, four assists) in his team’s first 14 contests. Suess is a confident puck-carrier with good skating ability and a predisposition to drive towards the net.

This game will be broadcast on AHLTV.com (subscription required), with the opening puck-drop set for 5:00 p.m. MT. Live game updates can be found on Twitter at @miketgould and @theheatbeat, or online at TheAHL.com.
Advertisement
Ad
Advertisement
Ad